Columbia Township Police have cited the driver of the Chevy truck that went through the ice at Eagle Point Marina shortly after midnight, Sunday, January 21.  On Friday, January 26th, Christopher Phenicie of Clark Lake was cited for “Careless Driving and Fail to Stop and ID at a Property Damage Accident,” according to Chief David Elwell (see wording of citation below). The chief commented “alcohol consumption prior to the accident was a factor, and obviously driving carelessly on the ice, doing donuts.”  The marina dock was damaged, and will be “paid for either by the insurance company of the vehicle owner, or the driver.” From here, the driver would go to court and either plead guilty/responsible or work out a plea deal with the prosecutor. 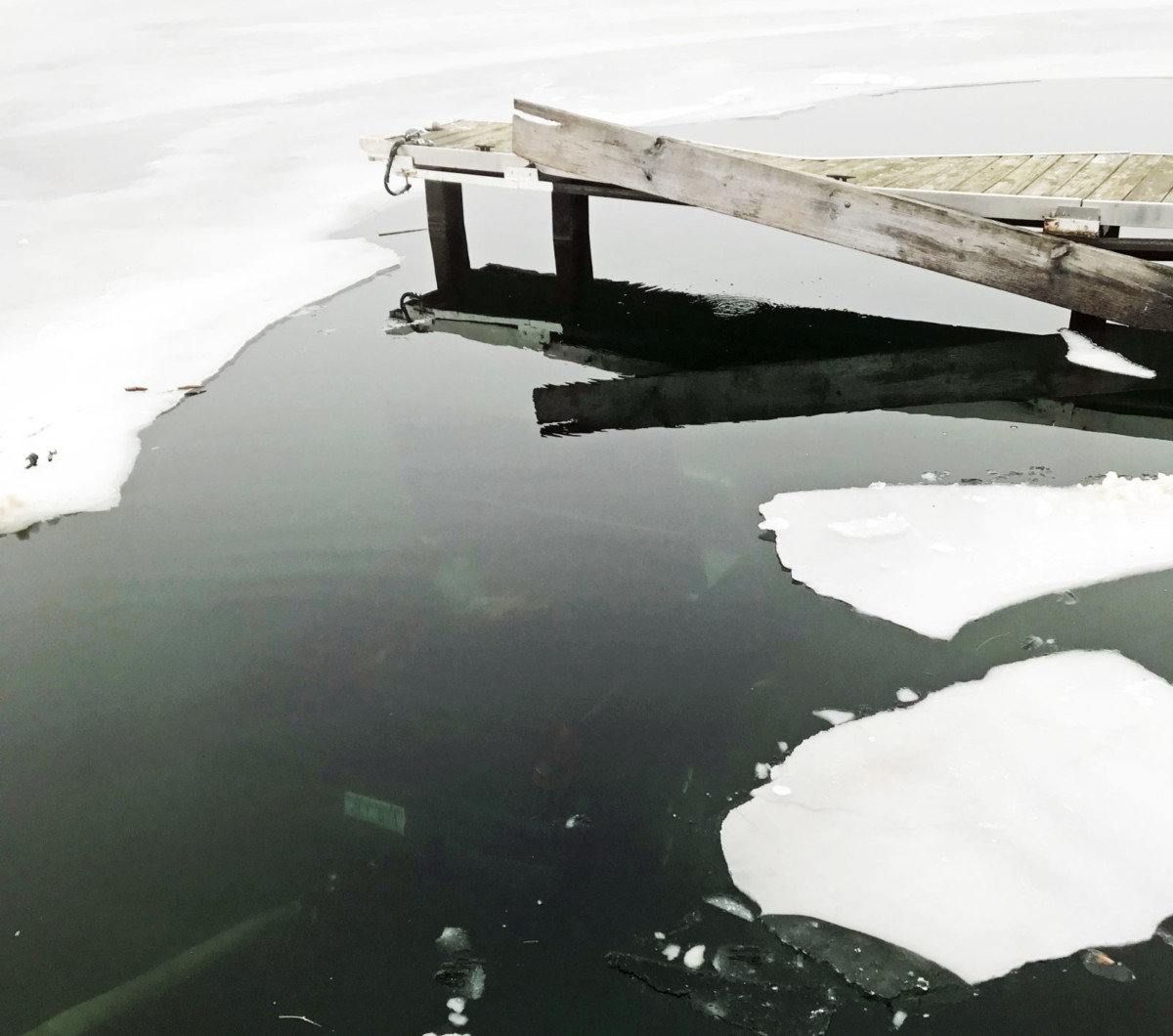 The driver, 26 years old, had a passenger.  Both were able to escape the vehicle and neither was injured.

At the time of the accident, it was believed visibility was low.  The marina operates bubblers around the docks to protect them from ice. 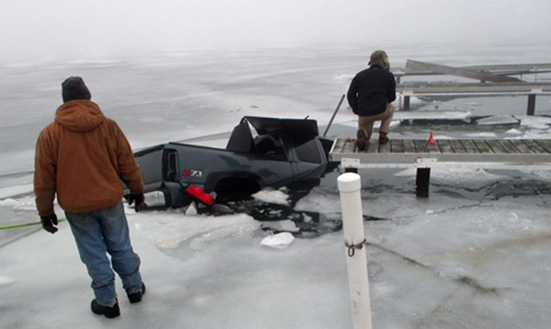 It took Bill Bendele and his crew over three hours that Sunday afternoon to pull the vehicle from where it came to rest in 15 feet of water.  They chainsawed the 6 inches of ice in the area for access. To get hold, the crew lassoed the trailer hitch on the back of the truck.  The boom truck then dragged it under two docks.  Once near the shore, they used the ice as a platform for leverage. 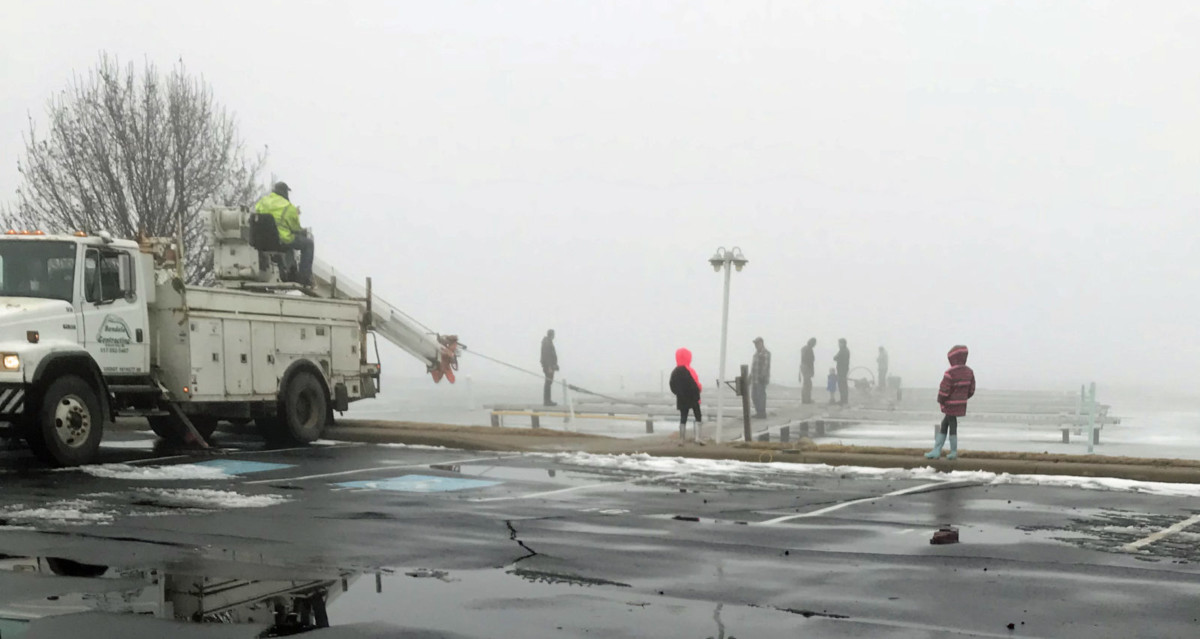 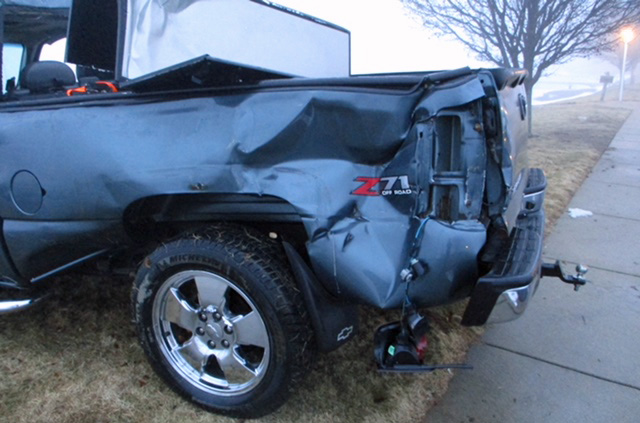 Below are the citations, as found in Michigan law.

257.626b Careless or negligent operation of vehicle as civil infraction.

A person who operates a vehicle upon a highway or a frozen public lake, stream, or pond or other place open to the general public including an area designated for the parking of vehicles in a careless or negligent manner likely to endanger any person or property, but without wantonness or recklessness, is responsible for a civil infraction.

(1) The driver of a vehicle who knows or who has reason to believe that he has been involved in an accident upon public or private property that is open to travel by the public shall immediately stop his or her vehicle at the scene of the accident and shall remain there until the requirements of section 619 are fulfilled or immediately report the accident to the nearest or most convenient police agency or officer to fulfill the requirements of section 619(a) and (b) if there is a reasonable and honest belief that remaining at the scene will result in further harm. The stop shall be made without obstructing traffic more than is necessary.

(2) If an individual violates the requirements of subsection (1) and the accident results in damage to a vehicle operated by or attended by any individual, the individual is guilty of a misdemeanor punishable by imprisonment for not more than 90 days or a fine of not more than $100.00, or both.

Previous stories on this topic:

Read the story from Monday, January 22 by clicking here.

Read the story from Sunday, January 21 by clicking here.

A vehicle broke through the ice in January 2017.  Read the story by clicking here.