As the countdown continues to Raft-O-Rama 202, here’s another blast from the past.   The Boyers’ treasure trove of Raft-O-Rama photos takes you back over three decades. On Tuesday, this website reviewed 2006, 2007, and 2000.

The theme for 2006 was Cartoons.  Here are 24 of the photos from that year, enhanced with the today’s technology, and presented for your viewing enjoyment.

1991 was the first year that the Boyers got involved in Raft-O-Rama.  Here are four photos to mark that beginning.

Tucker and Tricia Boyers have given this website temporary custody of the their 30  year collection of Raft-O-Rama photos.  They are sorted by year, which makes the scanning and Photoshop editing a bit easier.  No doubt other photos exist, and now is a good time to make them part of Clark Lake’s permanent record.

Earlier photos are rarer.  When found, determining their year or theme can be problematic. Ted Ligibel found this one from 1964 which he believes could be the earliest Raft-O-Rama photo ever.  And Ted should know.  He wrote the book: Clark Lake–Images of a Michigan Tradition.

Ted tells this story of the 1964 Raft-O-Rama. “Using Every’s raft, we draped cloth along the side rails and made a huge sail with an old bed sheet and drew a skull & crossbones on it.  On board were Ginny and Eddie Camp (Every’s grandchildren), Ted and Angel Ligibel, Bob Shordt (friend of Ted’s), and assorted others…not sure who was driving.  And it was on my 15th birthday…July 31, 1964.” 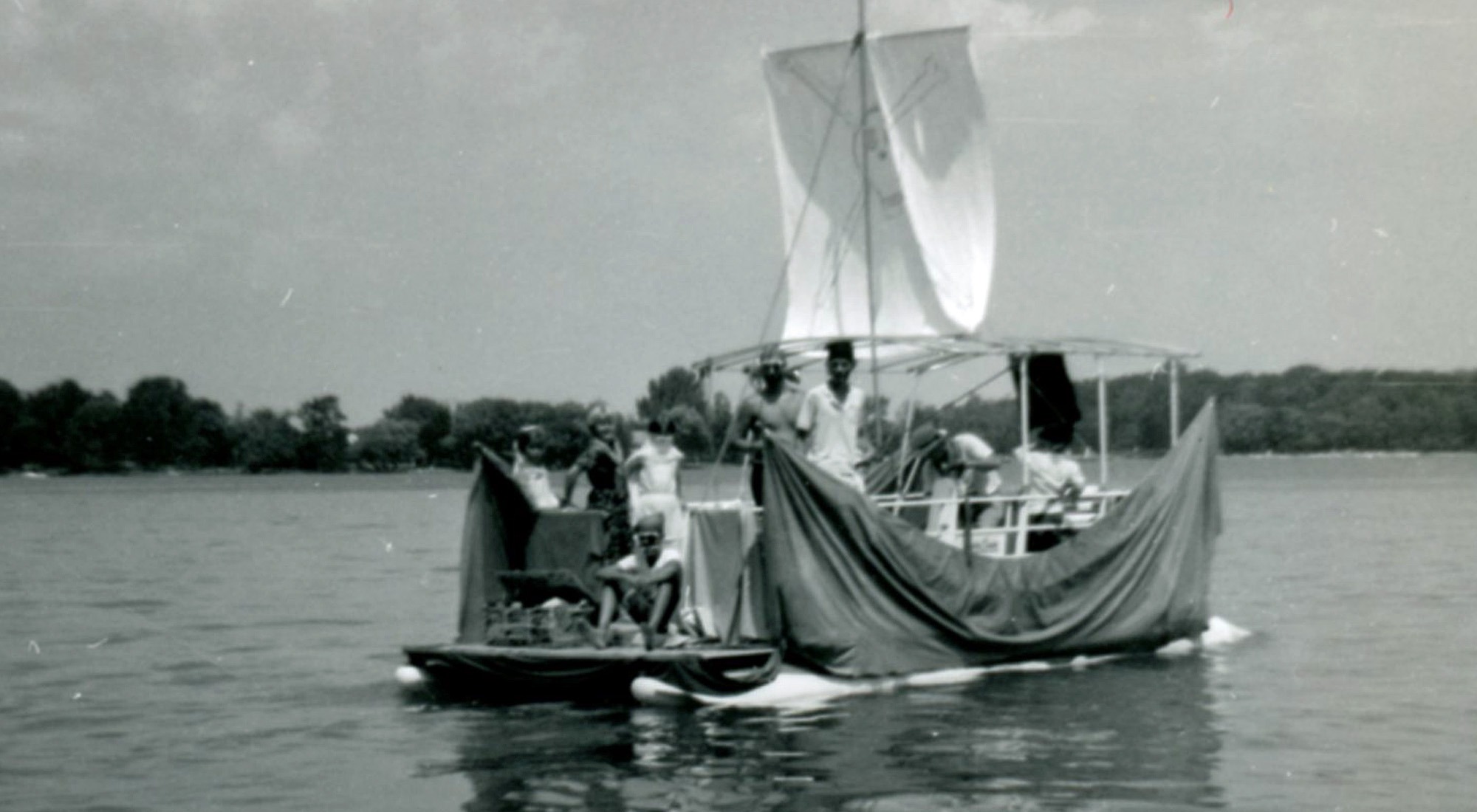 You’ll never find out who judges Raft-O-Rama.  Like a secret grand jury, their identities are held inviolate for the ages.  These individuals are tasked with judging winners in each category.  (To read about the categories, please click here).  The Peoples Choice award is different.  It is determined by people at the lake who view the rafts and vote on them at Eagle Point once the parade is over (see schedule below).  Each year, Dotty Karkheck designs the Peoples Choice award, and they are always exceptionally creative.  This year’s trophy is a bit fishy, as you can see below.  A photo of the winning raft will be placed in the frame, and presented at the award ceremony.

Many activities will engage you at Eagle Point after the parade of rafts.  One of them is checking out the latest Clark Lake gear, like the 2021 baseball caps.  The one that appears white is actually a very light shade of pink.

These will also be available at Doyle’s.  Supplies are limited.

Sunday, August 8th, will play out this way at the lake and Eagle Point:

The Raft-O-Rama crew met Thursday evening to put finishing touches on this big event.  You’ll recognize them at the gig because you can’t miss them.  Just look for the bright lime-green T-shirts.

More information is available by accessing these links.

Starting in 2014, this website covered Raft-O-Rama extensively with photos of the entries, standings and winners.  To find a specific year, type Raft O Rama followed by the year in the search bar.

Also part of this big weekend at Clark Lake are other major events: