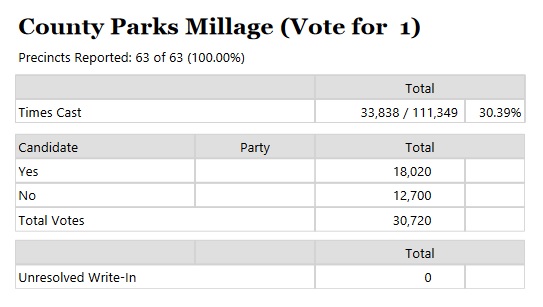 Voters passed two Jackson County wide property tax increases in Tuesday’s election.  Both Animal Shelter and Parks millages got thumbs up. Of particular interest to Clark Lake is the County Parks issue since it will affect the future of the County Park at the east end of the lake. If the decision had been left to Columbia Township voters, the tax would have been defeated.

The property tax amounts to 0.5 mils.  The annual cost to a property valued at $100,000 will be $25 per year. That will generate $2,180,000 annually (see Parks Department campaign literature in this earlier story).  It’s expected that the revenue would significantly exceed needs in the first few years, according to Jeff Hovarter. The excess revenue would be invested and draw interest in anticipation of inflation that would drive up park expenses as the 20 year plan proceeded.

What does the Parks Department have in mind?