Activity in Clark Lake’s two parks has not escaped concern.  In summer of 2017, problems associated with the Township Park at the west end reached a peak.  That included overcrowding and problems with parking, alcohol, drugs, and trash.   Those problems could have been the unintended consequence of the improvements (read how those problems were addressed later in this article). Now improvements are ahead for the County Park at the east end.  A property tax millage passed in 2018 provides Jackson County Parks with prodigious financial support. With those funds, the County is mapping out plans to make Clark Lake’s County park more attractive and popular.  The full extent of the plans and the impact they might have on Clark Lake are not yet known.

With the purpose of looking out for the interests of fellow property owners, a group of Clark Lake residents have volunteered their time to form an organization.  The Clark Lake Parks Commission held their formative meeting at the Community Center Thursday, May 23rd.  The use of the word “commission” in this case means “commitment” to Clark Lake.

In addition to learning current rules and proposed changes to the parks, the Commission seeks input from those at the lake.  They invite residents to attend meetings and become a member.

Got a question, comment and/or become a member?  These are the directors, and you can reach them at ClarkLakeParks@gmail.com.

Few details are known about potential changes to the County Park.  In one printed piece, they point to an action program to add modern restrooms, a play structure, a picnic shelter, and landscaping.  In the past, the County has talked of installing a fishing pier, boat launch, creating a sandy beach, and stabilizing the 540-feet of shoreline with coconut fiber logs.  The video below was recorded before Jackson County residents voted to increase property taxes.

At the formative meeting of the Commission, the Clark Lake group discussed issues they see impacting Clark Lake.  When the Township Park was improved, heavier usage and problems resulted.  At one Township board meeting, one trustee said “we made it too nice.”  Before increased police enforcement, drug and alcohol use were evident, and the park was often trashed.   Police found violaters were not Columbia Township residents.  In the video below, Judi Kelly went before the Township Board to described what she was seeing during the summer of 2017.

The Township responded.  As police enforcement intensified, things improved as you will see in this video.

At this formative meeting of the Clark Lake Parks Commission, members discussed both parks and the unintended consequences of changes.  The topics below spotlight lessons learned by the Township and how they might apply to the County, as well as issues unique to each park.

Overview
To date, the County Park is “low impact.”  Will that change, and what steps are needed to prevent the park from becoming a detriment to the lake?

Capacity
Neither park has a known limit on the number of people who can be permitted to use it at a given time.  If a specified number were established, there is no current method to monitor and restrict further admission.   Clearly there have been times the Township Park was overburdened.

Parking
Parking is haphazard at both parks, and more of a problem at the Township Park because it is more popular. People block each other with cars and trailers.  A similar situation could arise at the east end if the County’s plan to bring in more people to the east end succeeds.   Other pressure points in the County Park include park users blocking access to the Community Center.  The Community Center’s goal is to preserve Clark Lake’s past, and it needs revenue to maintain the 120-year old building.  Rental income from those who hold weddings, birthday parties, reunion’s, etc. is a must. If the parking issue is not solved, that usage could be at risk.  Both parks could benefit by defined parking places.  This could be accomplished by laying down parking lines a couple times during the season.

Security
Police enforcement at the Township Park cut back on drug and alcohol use.  Security cameras played an essential role.  The Township updated outdated rules and penalties (read them here).  There are no security cameras in the County Park, thus no practical method to monitor potential illicit activity.  A car chase ended in the County Park last summer and ended with a fist fight. Police arrived only because someone called them. 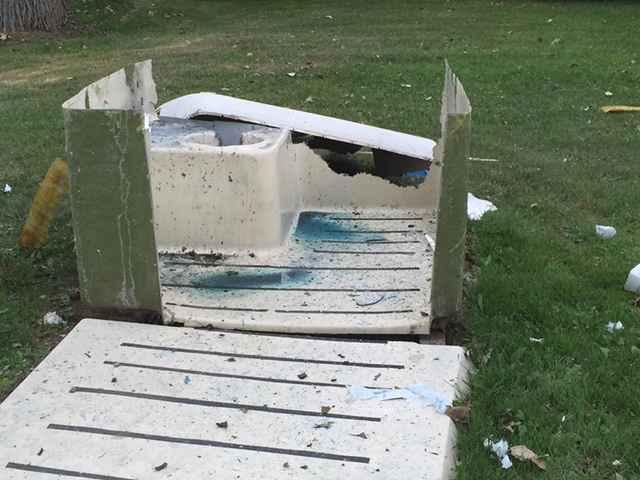 Another time, someone blew up a port-a-potty.  That prank might not seem like a threat.  But it created a mess and public funds were involved in the replacement.  And the perp(s) got away with it.  Without security cameras and a plan to monitor them, criminal activity may not be stopped before harm comes to individuals and property.

Gates
The Township Park is fenced and gated, so its hours can be controlled (open until 10 pm).  Should it be open that late?  The County Park does not have effective fencing, so enforcing its dusk to dawn rule is not practical.  Further, the fencing at the County Park is disheveled in appearance.

Those were some of the topics at the first meeting of the Clark Lake Parks Commission.  Below are the points that comprise its mission:

1.       Learn and be conversant of all rules and regulations promulgated by Columbia Township, Jackson County, State of Michigan or any Federal governmental agency which may directly or indirectly affect Clark Lake;
2.      Learn of any proposed or in-progress changes or modifications to either park and provide the Commission’s input and advice;
3.      Keep Clark Lake residents informed and advised of all relevant issues through the Clark Lake Spirit website or whatever other means the Commission deems appropriate;
4.      To survey residents, when appropriate, about any relevant issue affecting either park;
5.      To establish a positive working relationship with Columbia Township, Jackson County, State of Michigan and/or any Federal agency;
6.      To offer recommendations to any appropriate and relevant local, state or federal agency or body on any issue relating to either park; and
7.       To do its best to see that any future changes, modifications and/or additions to either park will not have any negative effect on the residents of Clark Lake.