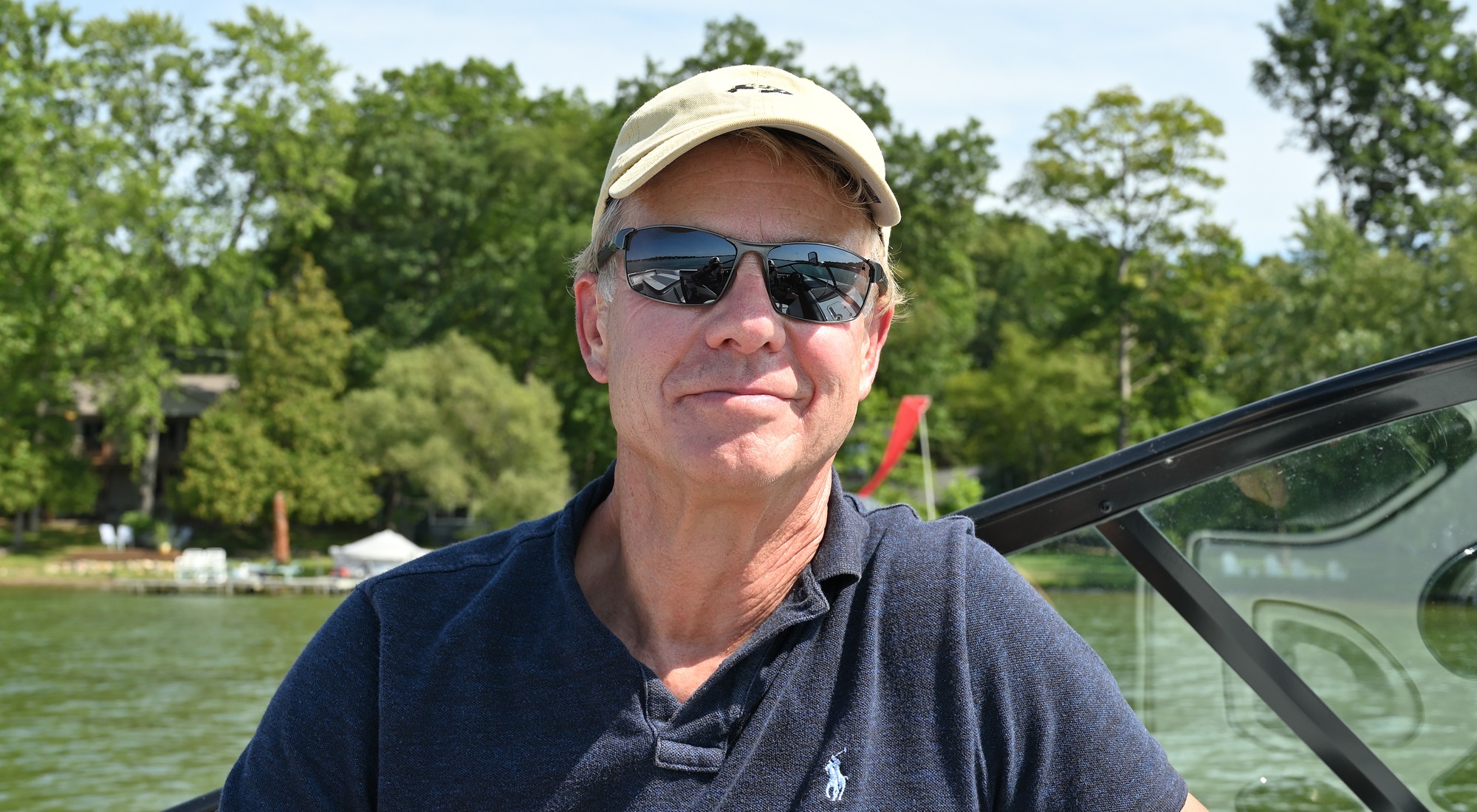 On Wednesday, August 25, Roger Lepley, AIA, left Kalamazoo and headed east on I-94 toward Clark Lake.  Why is this noteworthy?  Clark Lake has a connection with Roger, and it’s visible every summer day.  Roger is president of Consort Corporation.  Consort manufactures Dori Poles.  And in case you’re not familiar with this product, Dori Pole banners fly from docks all over Clark Lake.

In 2016, this website published a story about Dori Poles.  The reason?  Because they dominated the shoreline, their presence cried out for some research.  The result–and photos–can be seen by clicking here.  When Roger viewed the website story, he got in touch.  He said Clark Lake “may actually hold the record for a single lake.”   Over time his curiosity about Dori’s at Clark Lake lingered.  So, he made an appointment to visit.  As he was chauffeured by Ski Nautique around the lake recently, he enjoyed seeing his product in action and documented the visit with photos and videos of his own.

The high number of Dori Poles here seems to fit a Clark Lake tendency.  Consider the explosive growth of Hobies in the 1970s and 80s.  At one point, Clark Lake had more Hobies than any other U.S. inland lake, and received the designation Fleet 58.  That inspired Hobie Alter’s visits to Clark Lake, and for Clark Lakers to participate in events elsewhere.

Strong evidence suggests that today’s rafts (called pontoons everywhere else) started at Clark Lake.  Fifty-five gallon drums tied together were placed on a wood platform, possibly a swim raft.  A notch was cut on one side and 5 hp Johnson clamped on to power it.  They didn’t steer well, but the idea caught on like wildfire.  Designs improved, and manufacturers took over.  On July 4th, the Boat Count recorded 602 of them at Clark Lake.

Dori Poles at Clark Lake are visually pleasing.  They also tend to discourage the scourge of boat canopies—seagulls.  The fluttering flags cast a shadow in the wind, and seagulls take off for places where they are less bothered.  Not a perfect solution, but many at the lake feel they definitely help.

There is an historical Dori story.  Roger says their system was the brainchild of landscape architect Vince Mackel.  The name Dori?  Vince took a page out of Dave Thomas’ playbook who named his fast food restaurant after his daughter, Wendy.  Dori is the name of Vince’s daughter.

Dori Poles caught the eye of Roger, also an architect.  He became so convinced of their potential usefulness and popularity, that he purchased the company.

Dori Poles have been shipped everywhere in the country, as well as internationally.  And Consort, Dori’s manufacturer, which has a lock on the category, is located nearby at 2129 Portage Street, Kalamazoo.

Roger Lepley brought a “thank-you” to Clark Lake.  The gift, a Dori Pole, will be auctioned off at a future event to benefit the Save the Community Center renovations. 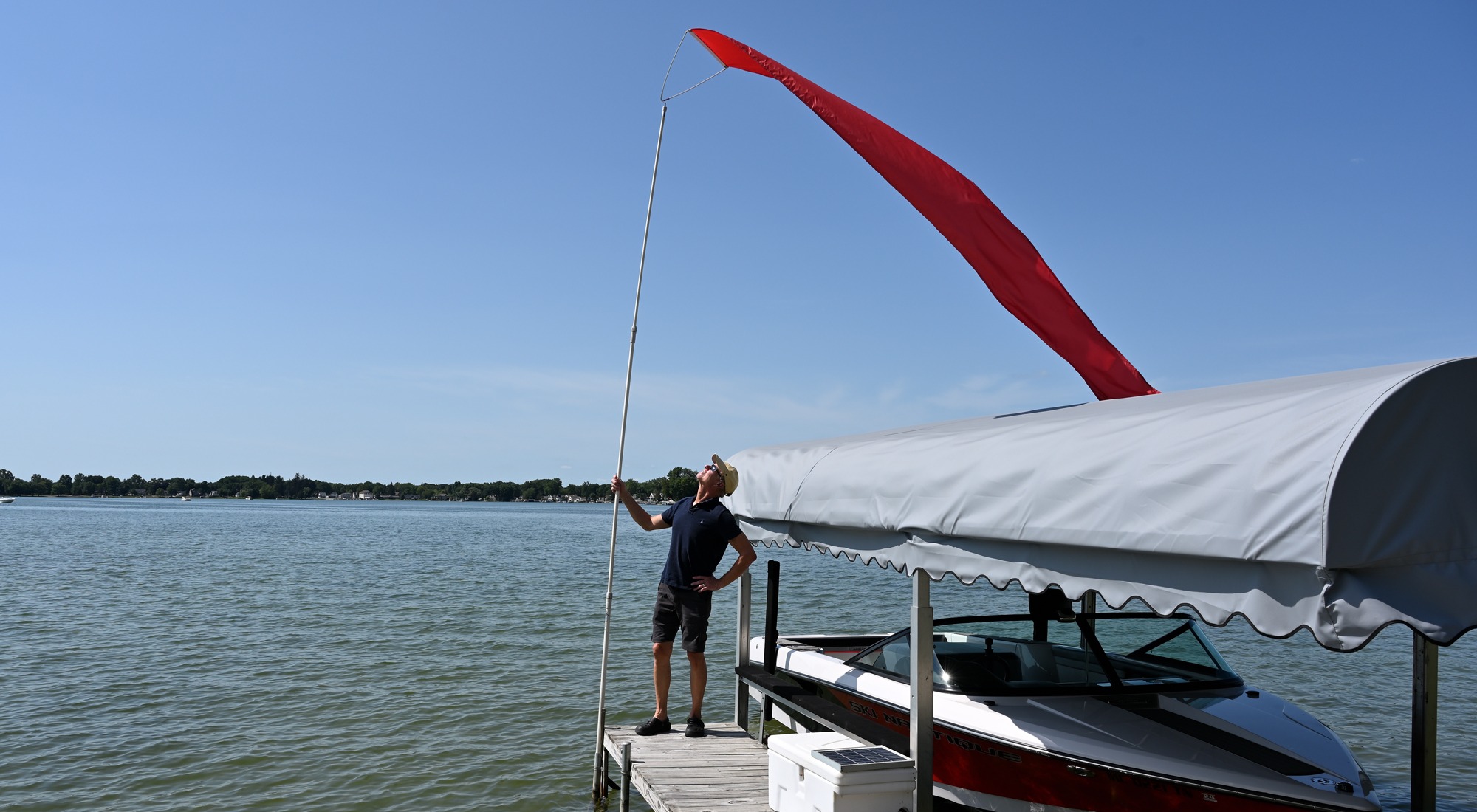