In this salute, Becky Consonni tells the story of her father’s wartime service and the arrival of a surprising Facebook message 70 years later.  Here’s her story.

This story begins with a shed.  The shed was built by my father in 1979 adjacent to our Oakwood Avenue cottage.  He loved it.  He also loved the music from Phantom of the Opera.  Working on a project, he would turn up the sound.  To add to it, he had a pulley rigged up so he could hoist a chandelier over the workbench to provide the lighting.  At the lake, structures like this shed acquire their own personality, and it’s hard to part with them when they must go.

When the shed made way for a new garage, it was a tough day for me.  I couldn’t watch the demolition, so I escaped into town.  But as if by magic, saying goodbye to my dad’s shed intersected with a completely unexpected turn of events.  I received this email:

I am looking for information about Robert M. Burdick.   Years ago, during World War II, he was a paratrooper and stayed at my grandfather’s house in the Netherlands for a period of time.  Through some research (obituaries of Robert and his wife), I stumbled upon the names of their children and you were the only one on Facebook.  Is your father, indeed, Robert M. Burdick, F-Company, 505th, 82nd Airborne?

At first, I thought this can’t be real.  Then I recalled finding the letters my father had written to home while in the service.  From basic training all the way through the fall of Berlin in 1945, he diligently wrote to his parents back in Jackson.  Even at age 20, I could hear his voice through them.

At the bottom of the stack, I remembered finding a letter written in Dutch to my father from a family by the name of Strik.  It was translated into English on the opposite side. My grandmother had sent clothing and food to this family who Hitler’s Nazis were trying to starve.  My grandparents were on a pretty tight budget, but managed to help this family at my father’s request. 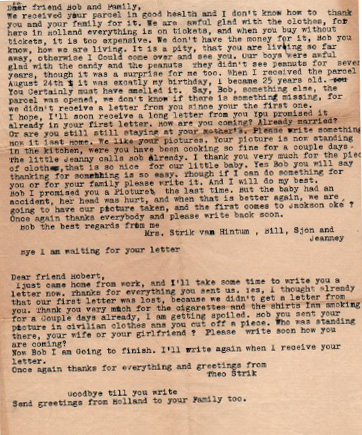 A letter to Bob Burdick from the Strik family 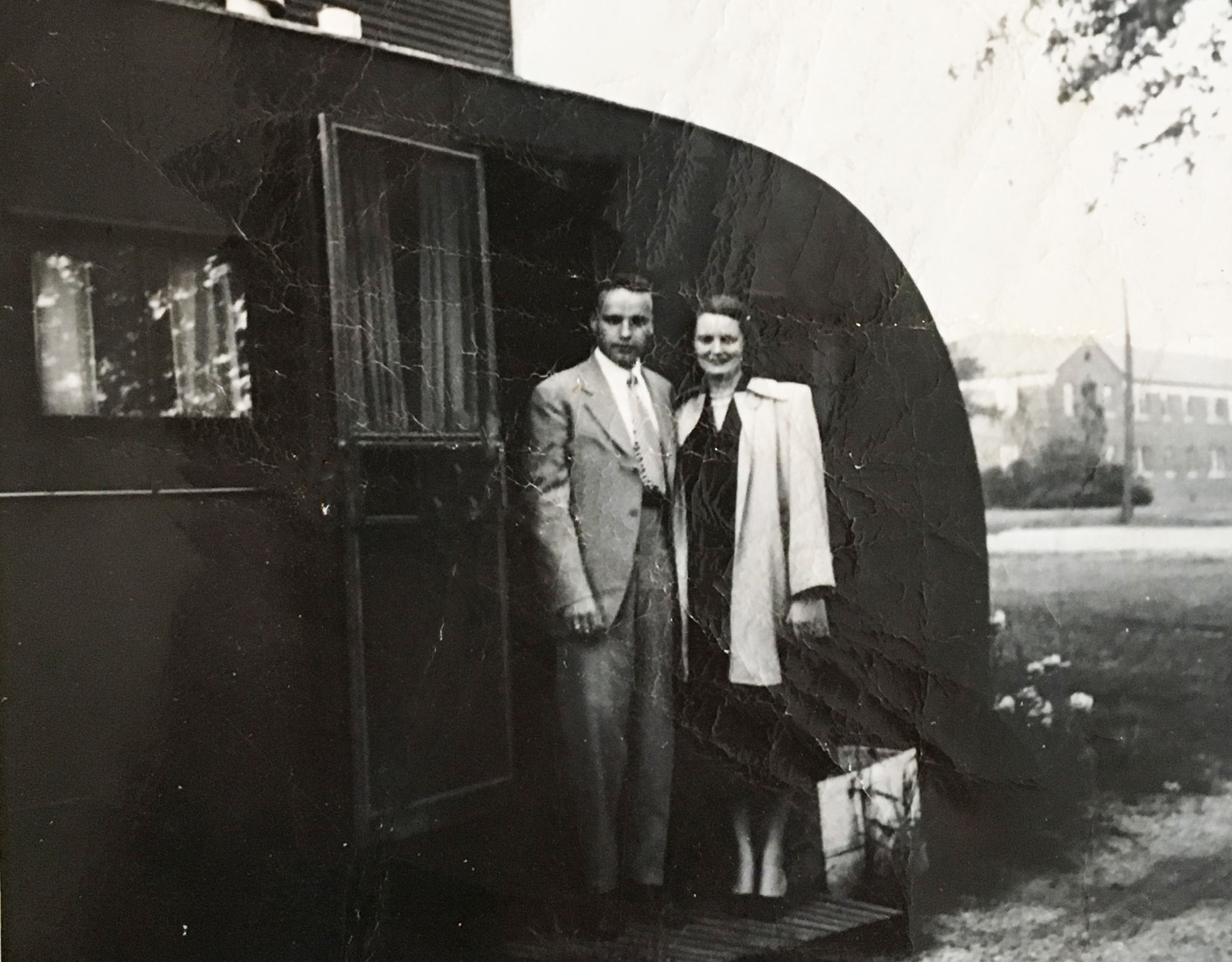 I wondered, “could this young man be writing about the same thing–or had he simply found photos of my dad online and this was not what it seemed to be?”  I followed up by asking for the name of the family and to see the photos my father had sent.  To my delight, Mr. Moorman sent me a 1949 picture of my parents outside their student housing trailer at Michigan State College.  None in my family had ever seen this photo before!

There’s more to the story.  Rick Moorman told me his grandfather was influenced by my dad. Because of this, he wanted to know more about my father, and we communicated several times about this.  He shared some of the letters my father had sent to his grandfather.  I believe they stayed in touch until around 1953.

My older sisters visited Nijmegen for the 70th anniversary of the 82nd Airborne. The Dutch are so grateful to the Americans who saved the lives of their families.  They honor the 48 who lost their lives on the bridge there.  If you’ve seen the movie “A Bridge Too Far”, it’s a pretty close depiction of what my father experienced. 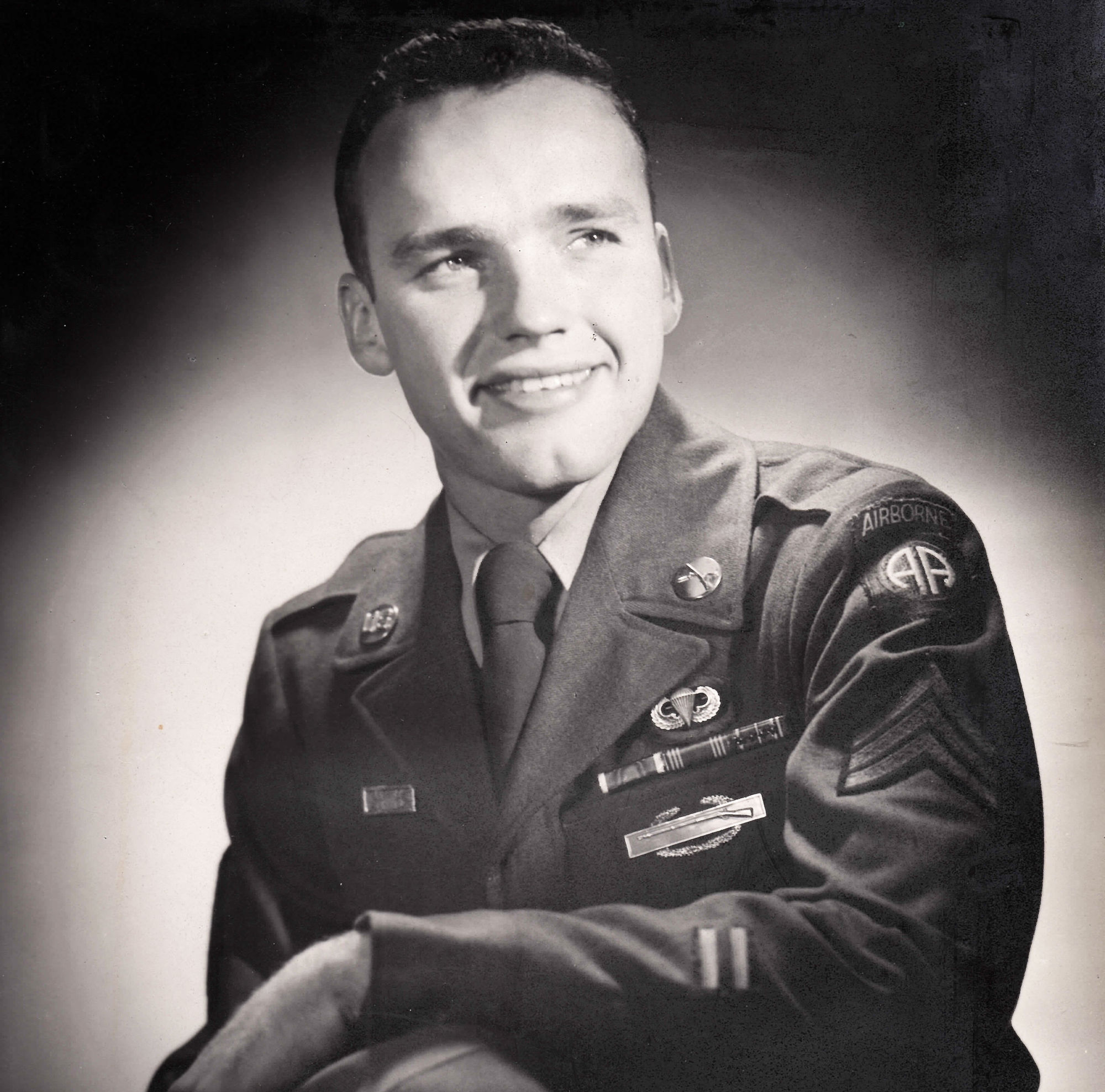 When Bob Burdick finally did come home from the war, he was a man, and no longer, a boy.  He never flew in another airplane and never encouraged any of us to be soldiers.  He had seen the horrors of war.  To give an idea of how this must have felt, here is a letter written by my grandfather to his two sons (my father and uncle), both serving in Europe at the time.

Dear Will and Bob:

Just because it’s Christmas, so you’ll know we are counting you present at our table and around the tree, I thought I’d write to give you something special to think about for Christmas.

I read about a chaplain who came thru Hell in the South Pacific with a bunch of bombers, and his explanation of how he came through it alive was—“I guess I was armored with prayers from home.”

I know that by now, both of you have found comfort in prayers, and faith in them, because of what you have been into, and because you are who you are. And as a Christmas contribution to that faith I’d like you to know that the “ole man” is living every minute of this with you, and “strengthening your armor” with prayer.  If you find yourself awake at 5:00 am by your time, you may know that a little prayer goes from me to God, not only for your safety, and your return home, but that you may be allowed to prove your worthiness for being kept well, and safe, and brought home again by finding your useful place in a world of peace after all this is over. This little ritual started with me soon after you both were in the fighting, and this is the first I have ever spoken of it to anyone, but it seemed like an appropriate time to tell you about it as sort of a Christmas message.  I guess that you know that the men in the Burdick house don’t often display much sentiment to each other, but this Christmastime being so different is reason for Pappy to unbend a little and tell you what goes on under his curls [Editor’s Note: he was totally bald].

I can’t help but feel that, after all the ruckus ends, we three are going to be much closer because of what you two have seen and been in and the things I’ve seen along that line, and it may be that we can help each other to readjust ourselves to things back home. This being closer is probably going to be the best thing coming out of this Hell of War for.

Merry Christmas and God Bless you both.

I miss my parents and grandparents every day.  To get this affirming message as to the beautiful, kind-hearted, generous, selfless people they were is so wonderful—coming from Europe 70 years later.  There are seven in our family, and I was the one whom it fell upon to transcribe and archive the letters.  It was also I who received the email from Europe.  Coincidence?  I don’t think so.

It seems that whenever I’m down with any major decision around here, I get affirmation from somewhere.  Life is good.