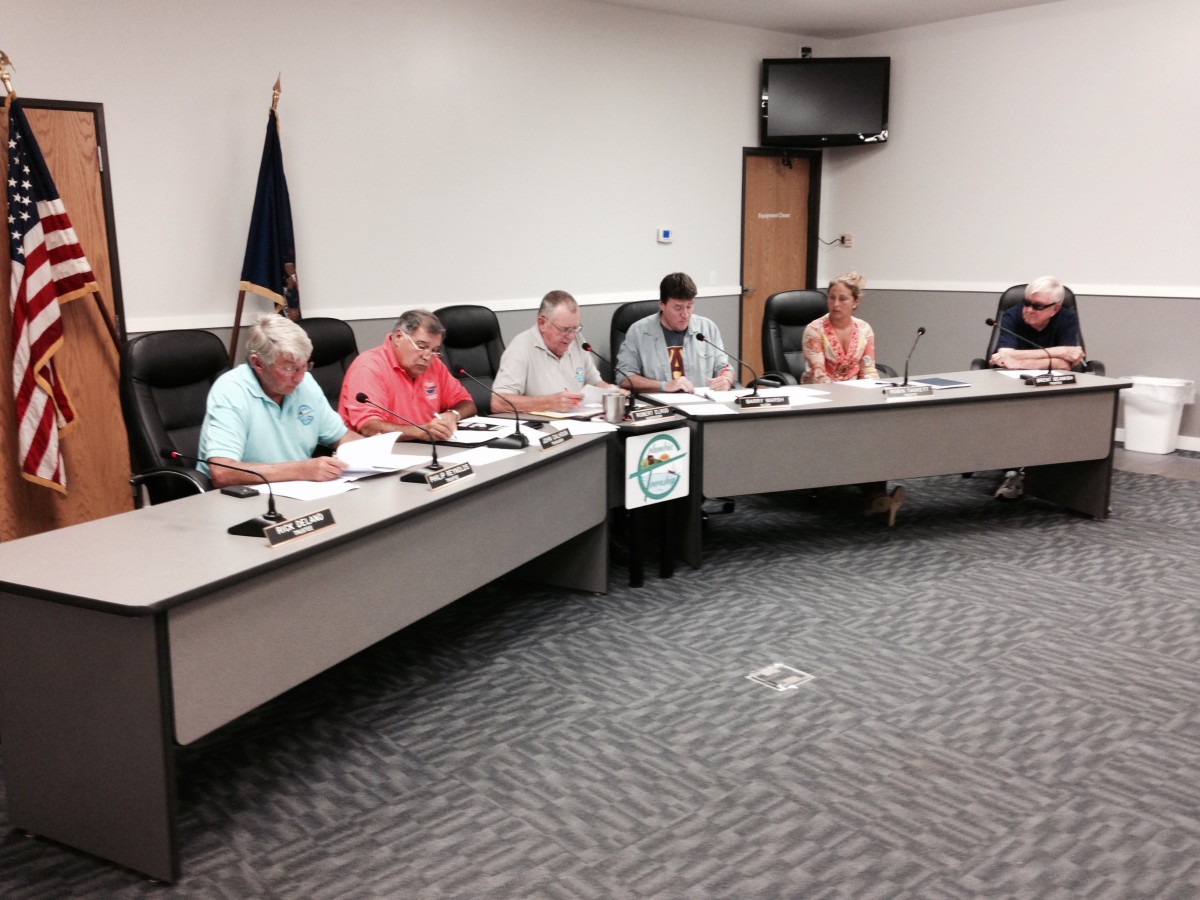 Tonight (Tuesday 8/11), the Columbia Township trustees voted 6-0 to create a special assessment district (SAD) to deal with an invader threatening Clark Lake–hybrid Eurasian water milfoil or HEWM.  DNA testing has confirmed its presence in the lake and a survey last fall revealed about 20 acres in the lake. Lakes that did not check its spread found that it curtailed recreational activities, destroyed wildlife habitat, and hurt property values. The SAD will allow treatment wherever the weed is found in the lake. The SAD also supports the cost of the treatment through a $75 per year assessment for each lakefront property owner.

Through private donations to the Clark Lake Spirit Foundation, four areas of the lake were treated early this summer.  A licensed operator performed the treatment with a permit from the DEQ and by permission of property owners.  Because of the limitation of property owner rights, the areas treated stopped at 250 feet from shore.  HEWM grows in waters of up to 20 feet deep, and there is a lots of it beyond 250 feet. The SAD addresses this limitation.

Tonight’s meeting was a culmination of a year long project by the Clark Lake Invasive Species Committee which has been  supported by the Clark Lake Spirit Foundation. The committee consists of Clark Lake volunteers who researched the problem thoroughly and concluded the only way to deal with HEWM was by the application of approved herbicides.  They then took the message door to door, held a public information hearing in December, and this spring started a petition drive to create the SAD.  Committee Chairman John Deming told the trustees and the audience “in taking the SAD concept to residents, the committee found overwhelming support–95% of lakefront property owners contacted by the committee signed the SAD petition.”  The committee delivered to the township petitions signed by 74% of the lakefront owners. 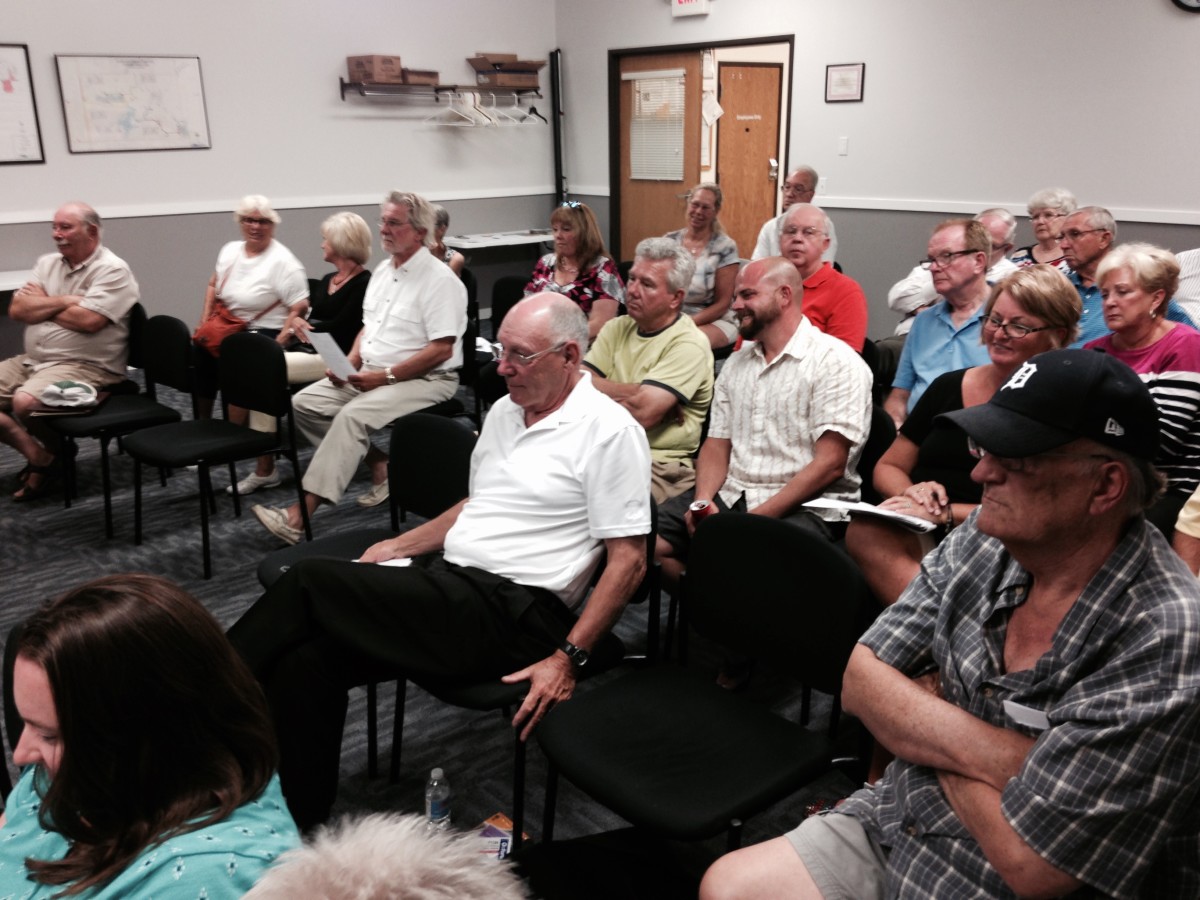 During public comment some in the audience questioned why businesses and marinas were not charged more than residents.  Part of the success of the project was its simplicity.  John Deming commented “Moving forward with this program now will keep the cost low. Experience shows the sooner treatment begins, the less of it is needed.”  Another committee member noted that adding complexity would cause delays allowing the HEWM to get an upper hand.

Others suggested that back lot owners or those using the boat launches for the day should also pay.  Township supervisor Bob Elrod pointed out that the lakefront property owners “had the most to lose.”  There was recognition that property values could be adversely affected by not checking HEWM’s advance.

Concerns were voiced about the safety of the herbicides and their affect on health.  Ron June, a committee  member, quoted from a pamphlet published by the committee regarding this topic.  The section reads “The two herbicides that are typically used target the invasive weeds, but not native plants.  Their use is approved by the DNR/DEQ and EPA.  Neither the American Cancer Society nor U.S. Toxicology Program has listed the herbicides as a carcinogen.  There are no known detrimental  effects to humans, pets and wildlife.”

Steve Hansen, a fishery biologist, is a representative of Professional Lake Management, was available to answer questions.  His company performed the treatment earlier this summer and is scheduled to treat the lake in 2016.  He was asked about how long herbicides remain in the water after treatment.  He said there is a “one day swimming restriction within 100 feet of treatment,” and the detectable levels, measured in parts per billion, drop near the treatment sites within several days.

Carolyn Zader, a Clark Lake resident, drew applause when she noted that “doing nothing was not an option.”  She said to let this infestation happen and turn our “pristine lake into a mud pit would be criminal.”

From this point forward, the township takes responsibility for the operation of the SAD.  One more public hearing is scheduled for September 21st.  At this meeting a landowner can object to being included in the district if he feels he was mistakenly made part of it.

The meeting, publicized by two full page ads in the Exponent and a notice to property owners by U.S. Mail, played to nearly a full house.  There was lively, but civilized, discussion. And one key takeaway was apparent–they were all motivated by their concern for the future of Clark Lake.