More Reassurance that Summer Is on the Way

The Memorial Day Parade, the biggest-little parade, became a bit larger last year. More people are participating out of respect to our fallen and to honor our American heritage.  So how do you get involved?  As always, it is sponsored by the Clark Lake Lions Club.  Here’s are the FAQ’s.

The Lions Club ask you to consider becoming part of their group.  Not only do they sponsor the Memorial Day Parade, but reach out to the community–the Clark Lake Easter Egg Hung, White Cane, annual Chicken Bar-B-Q  at Raft-O-Rama, providing eyeglasses for community members, and scholarships to graduating seniors.   The Clark Lions typically meet once a month for dinner.  They invite you to the next meeting on Tuesday (March 27th) at the clubhouse in Lions Park.  Fare this month features corned beef and cabbage prepared by Irish members Todd Kennedy and Mike Bullinger.  Interested?  Please call Walt Reed at 529-4979.

Now for a heart-warming look at the 2017 Memorial Day Parade, please scroll down.

As noted above, the parade assembles at the schoolhouse on North Lake Road.  It proceeds south on Hyde Road and turns around at the Township Park and heads north.  The highlights below spotlight the trip south, and ends with the kids as the parade heads north.

The meaning of Memorial Day is not lost at Clark Lake.  As the parade heads north, the assembly pauses at the cemetery where some who were lost in battle rest. This video commences with a prayer given by Lions Club President Mike Bullinger.  It is followed by the playing of taps–first from the front of the cemetery, and then echoed from the rear.

Dick Tallman delivered the Memorial Day address in front of the Clark Lake Community Church.  Dick is a retired Lieutenant Colonel and many know him as a prominent State Farm agent in Napoleon.  Here is an excerpt.

A crowd favorite is to watch the kids in the parade on decorated bikes.  At the end of the event, each was given a two-dollar bill as a memento of their participation.  Also in the slide show below, you’ll also see the Raft-O-Rama float which, appropriately enough, is a raft.  Many of the past Spirit Award recipients were on board.

The Columbia Central Band played our National Anthem as the spectators and participants gathered at the Clark Lake Community Church.

The Director of the Columbia Central Band, Joe Folts, is retiring. The band has been a longtime participant at the Clark Lake Memorial Day Parade.  He was honored by the Clark Lake Lions Club. 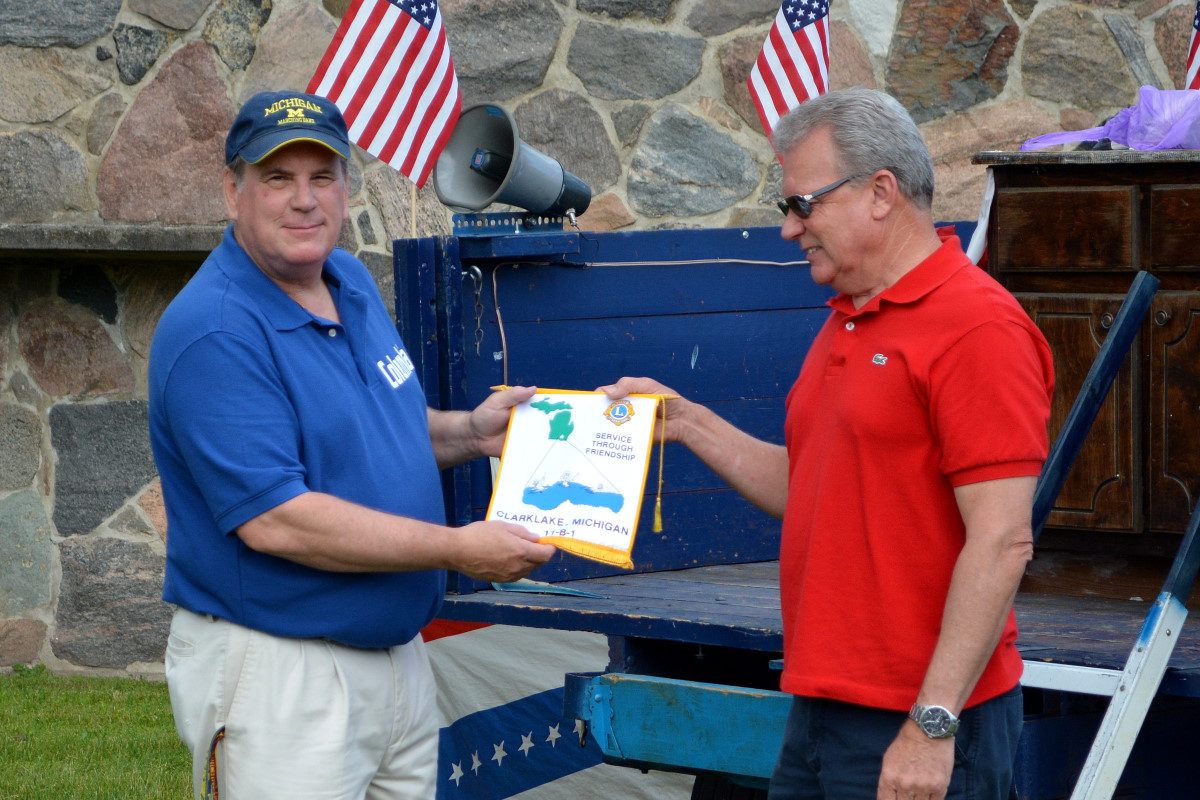