Searching the past for the origins of today reveals a community’s heart and soul.  Here, it’s called the Clark Lake Spirit.  Illustrative of this spirit is the story of how Clark Lake’s history was researched, compiled, written, and committed to the ages in the book:  “Clark Lake, Images of a Michigan Tradition.” 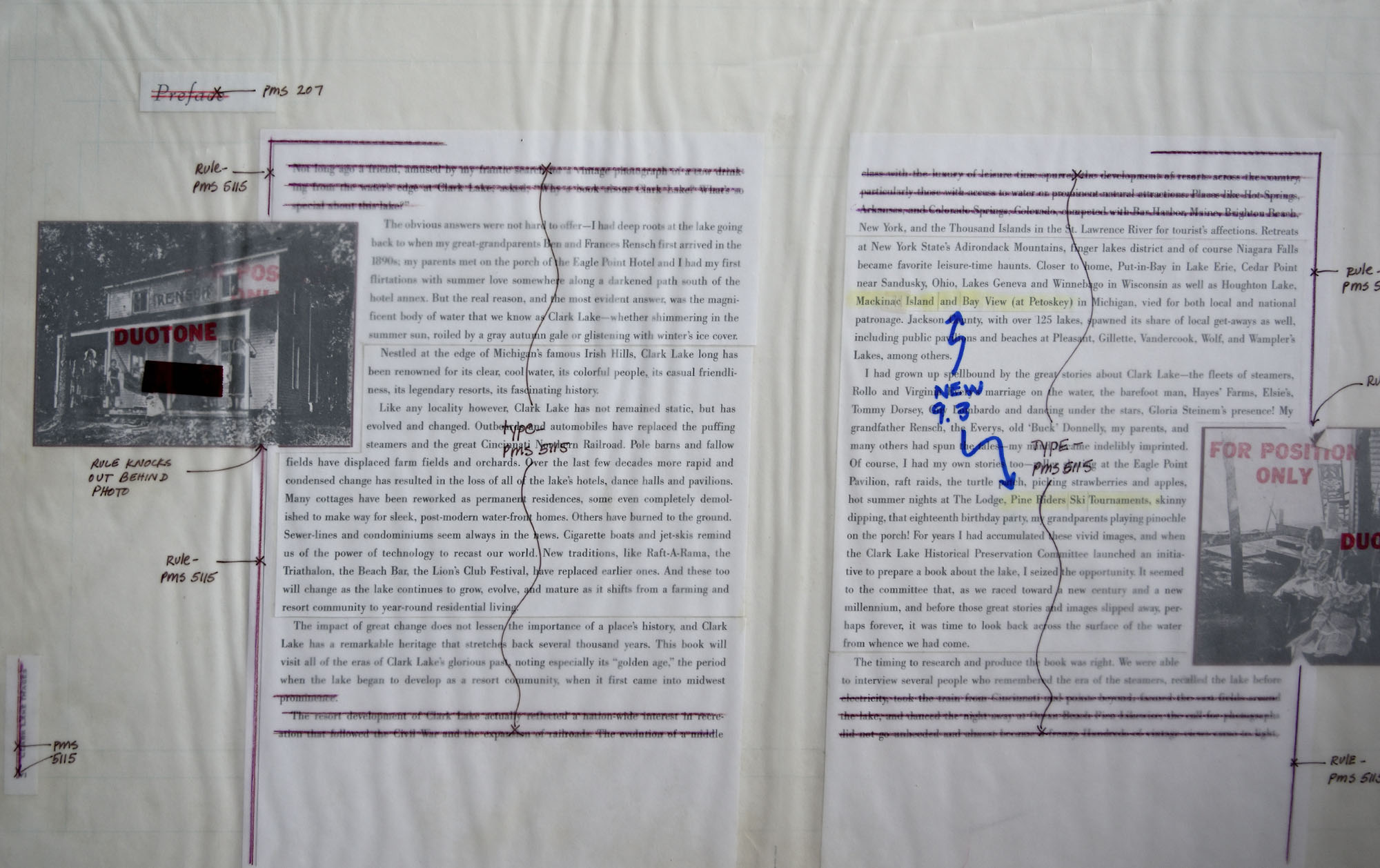 Publishing the book on Clark Lake history was a major undertaking.  It required the community to marshal resources in a way not previously seen at Clark Lake.  Recently some of the history of the process saw daylight, but not in a good way. Some of the production mock ups were rescued from what could have been a trip to a dumpster.  Instead of that unhappy ending, they will become part of the Clark Lake Community’s Center historical collection.  Preserving Clark Lake’s past is part of the Community Center’s mission. 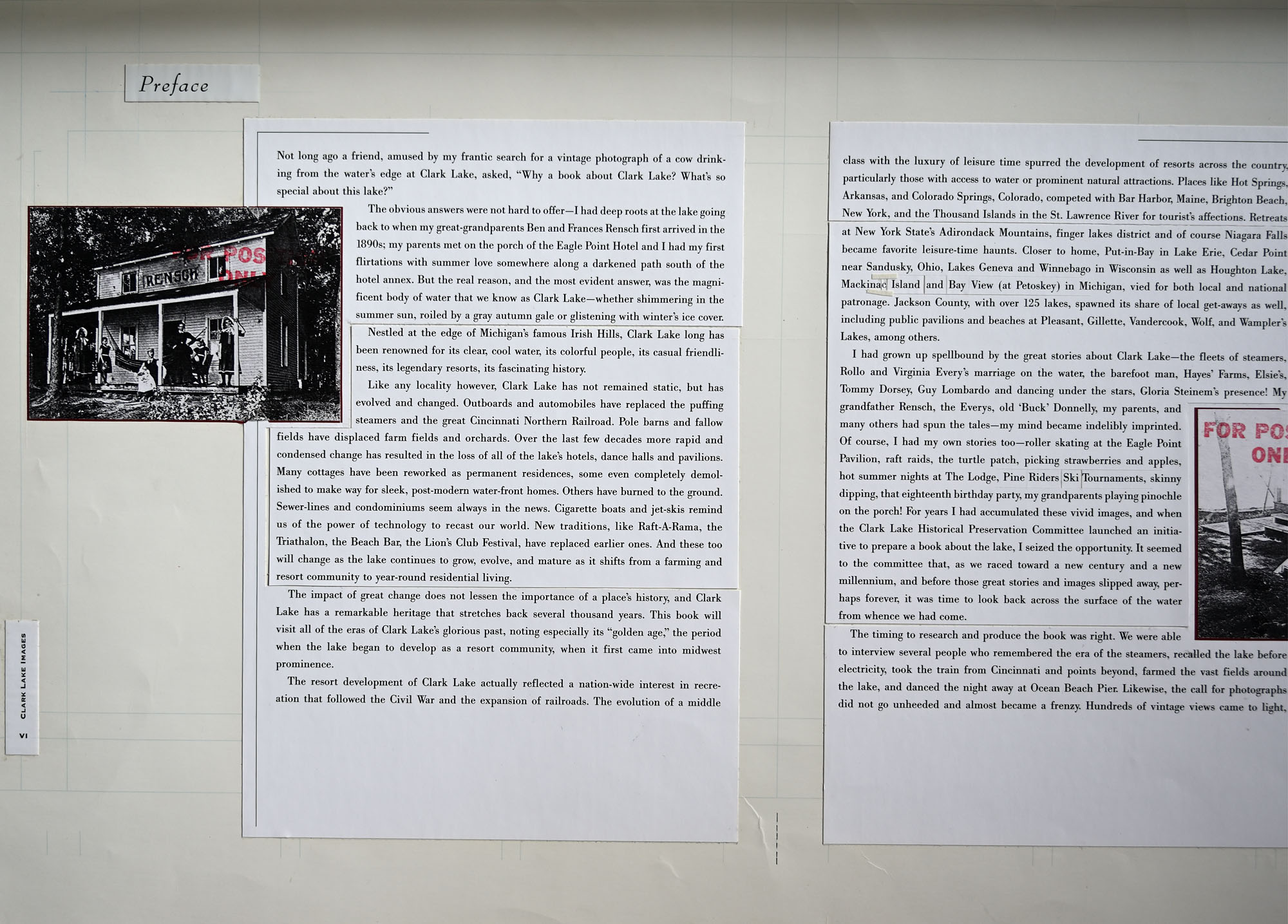 The successful launch of the book depended on the hard work and talent of Clark Lakers.  With insights gained through the publishing experience, some of the same people joined later projects, including the construction of the Spirit Trail and moving the Community Center from Kentucky Point to the County Park.  Who were the people who championed the publishing the book?  They gathered under the name of the Clark Lake Historical Preservation Committee.  On the committee were Bunty Adams, Bev Avis, Loretto Baker, Donna Barnes, Diana Blakely, Joe Collins Sr., Tom Collins, Bob Crary, Delores Field, Dick Hitt, Gerry Reniger, Linda Reynolds, Jim Schultz, and Meredith Szostek.  Sadly, many of those committee members themselves have passed into history. 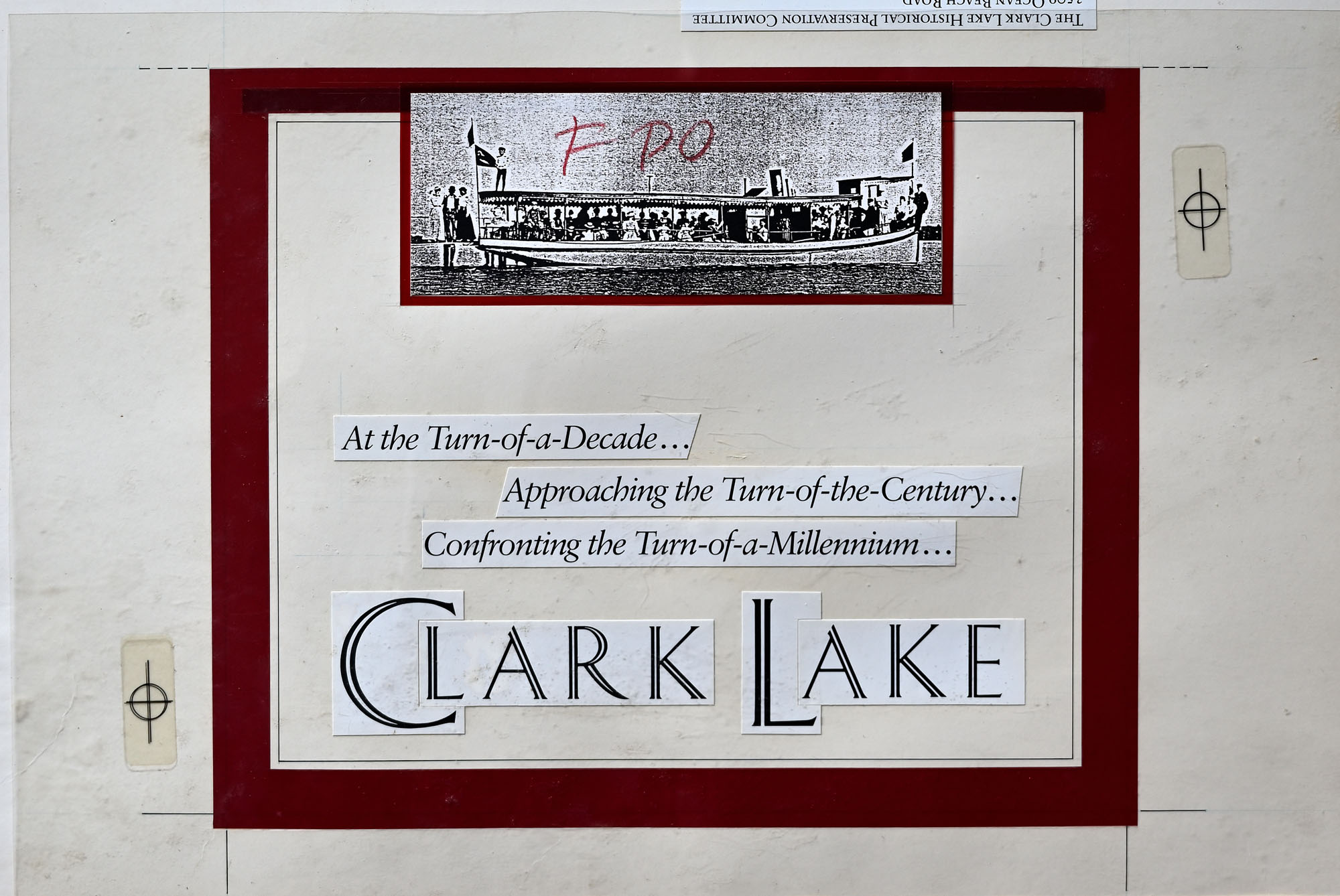 Ted Ligibel authored the book. Bill Cagney, co-owner of Chicago ad agency, Cagney+McDowell, handled the graphic designing as well as assembling and preparing the materials for printing. Ted and Bill’s strong ties to Clark Lake, and their professional backgrounds, qualified them for this excellent adventure. Hours were spent sorting through photos and written material on the dining room table at 1016 Eagle Point, a cottage purchased 100 years ago by Ted’s great grandfather, William Preece. 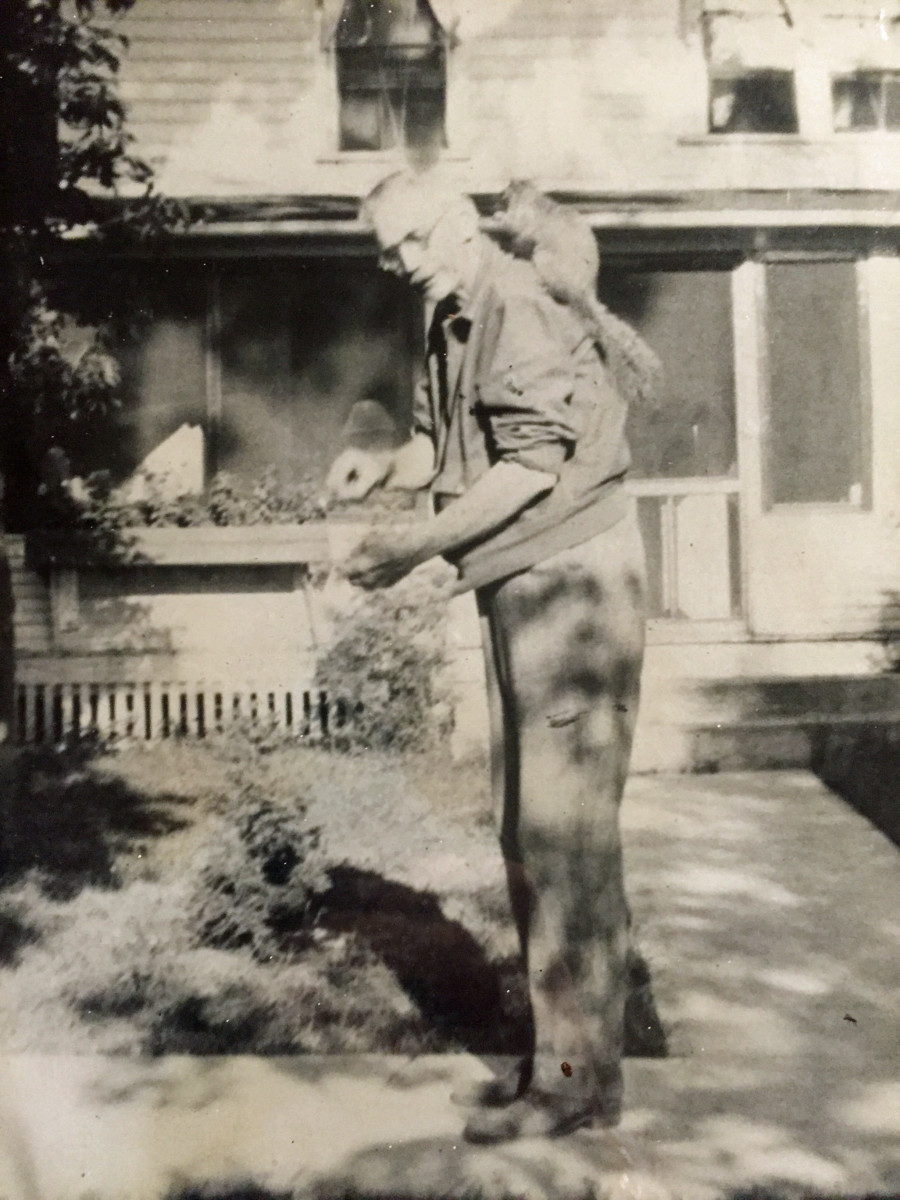 William Preece owned several cottages at Clark Lake.  In this photo, he’s standing in front of the cottage next door, at 1008 Eagle Point Road.  This property is now owned by another great-grandson.

Ted knew Bill well. They played on the shore at Clark Lake when kids. Bill’s cottage was just two away. Ted recalls, ”I had always wanted to write this book.  I had accumulated so much history over my lifetime that when the opportunity to do so was presented in late 1989, I seized the moment. The opportunity to work with Bill was a powerful incentive, given his expertise as one of the leading graphic designers in the Midwest.  And I will forever be grateful to those many individuals on the Historical Preservation Committee who made this happen…and allowed me to download a boatload of memories before they drifted away.”

As you can see in this timetable, the project required a high degree of organization. 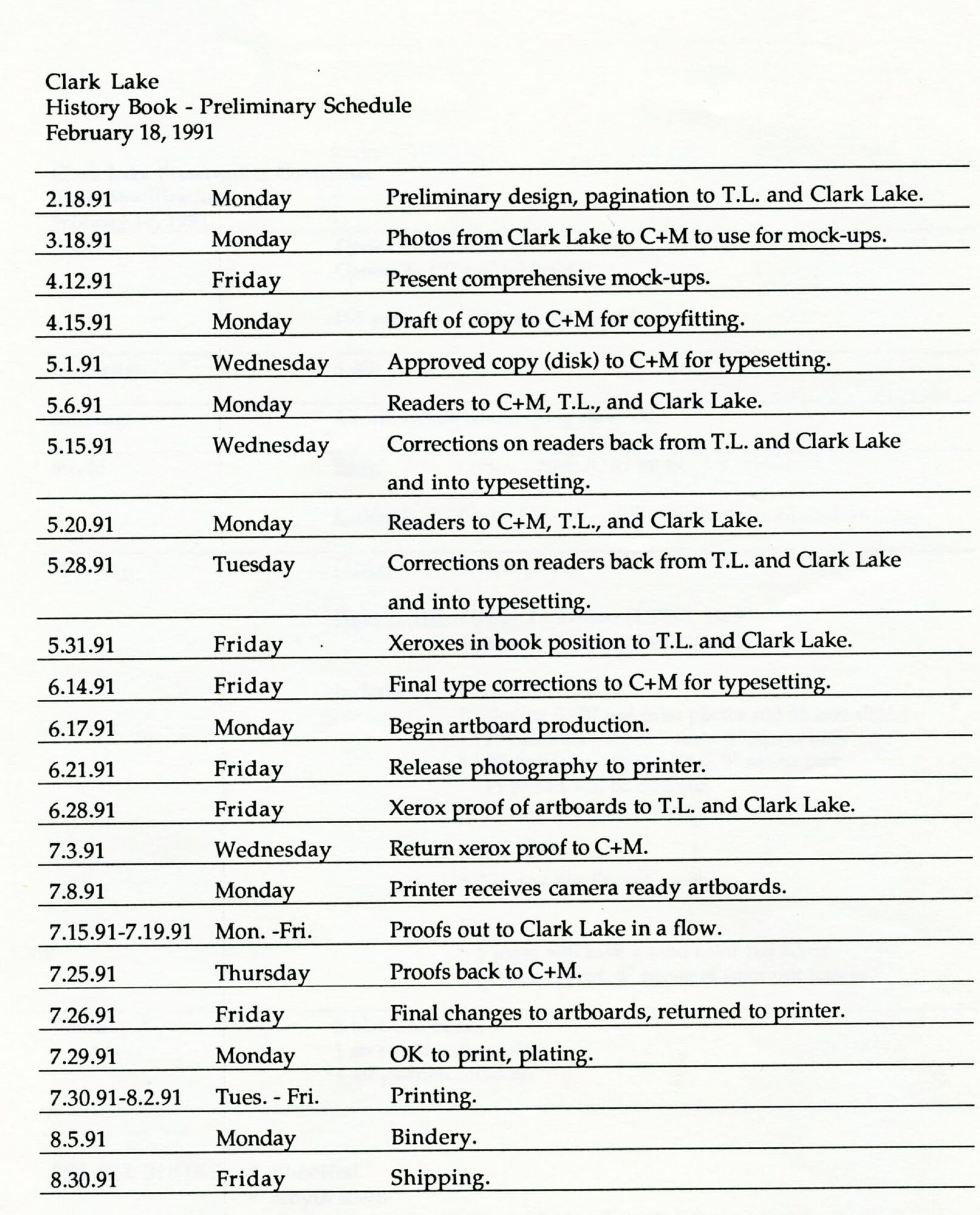 The initial proposal was outlined in writing on November 30, 1989. Then came gathering source material. A call went out to the community. Meetings were held, like this one on Memorial Day, 1990 at the Clarklake Community Church. 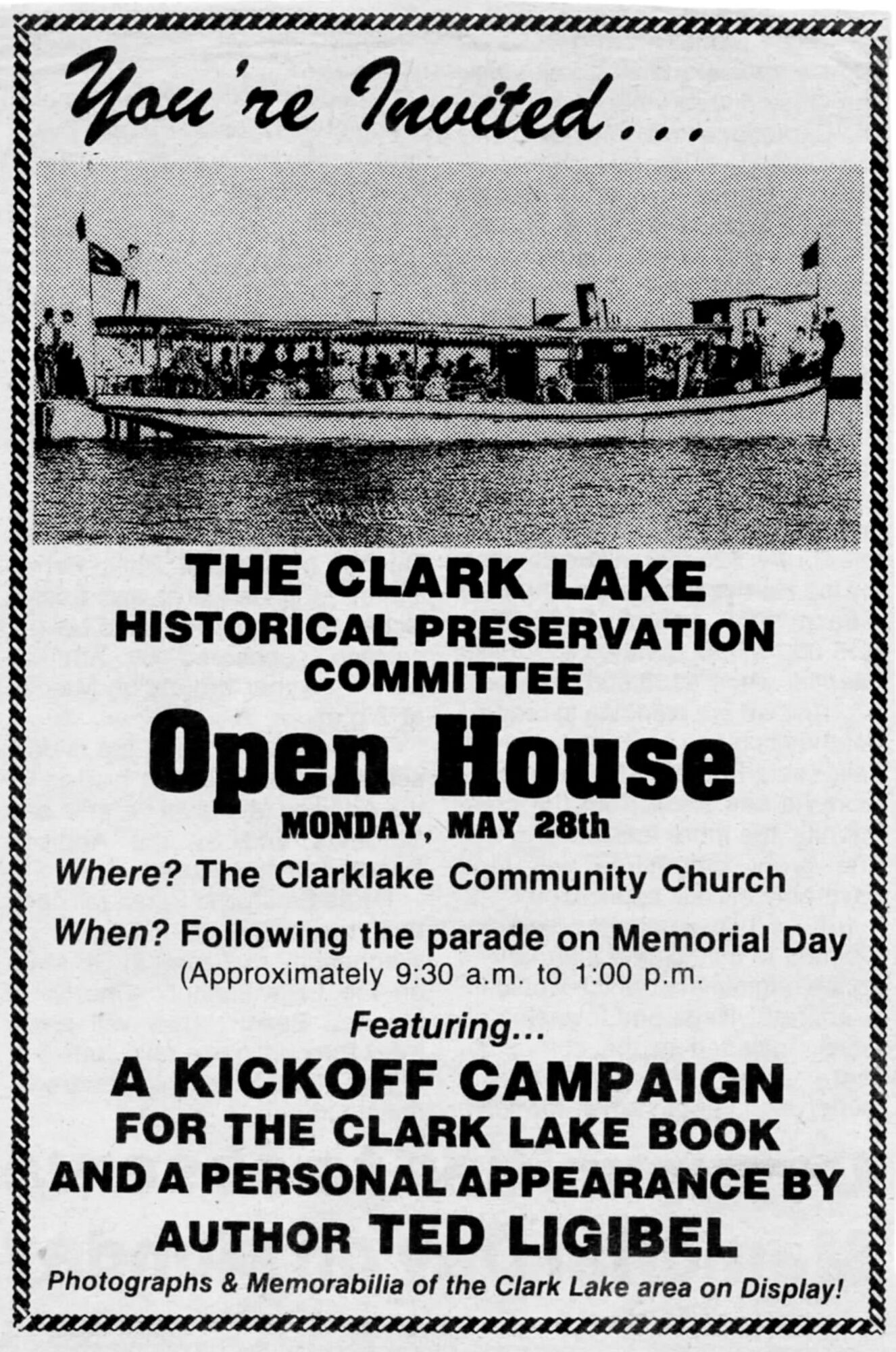 Photos were gathered. Initial photocopies were made of the photos and owner information was transcribed. When Ted needed a photo, he contacted the owner to borrow the original. Concurrently, Ted conducted a dozen oral interviews so personal stories could be shared and memorialized in print.

The timing of the printing enabled the book to become a favorite Christmas gift in 1991.   “Clark Lake, Image of a Michigan A Tradition”, is still available and can be found at Doyle’s Market.

This website features many stories about Clark Lake’s past.  Under the History section, you’ll find My Clark Lake Story, Historical Perspectives, Tributes, and Fleet 58. 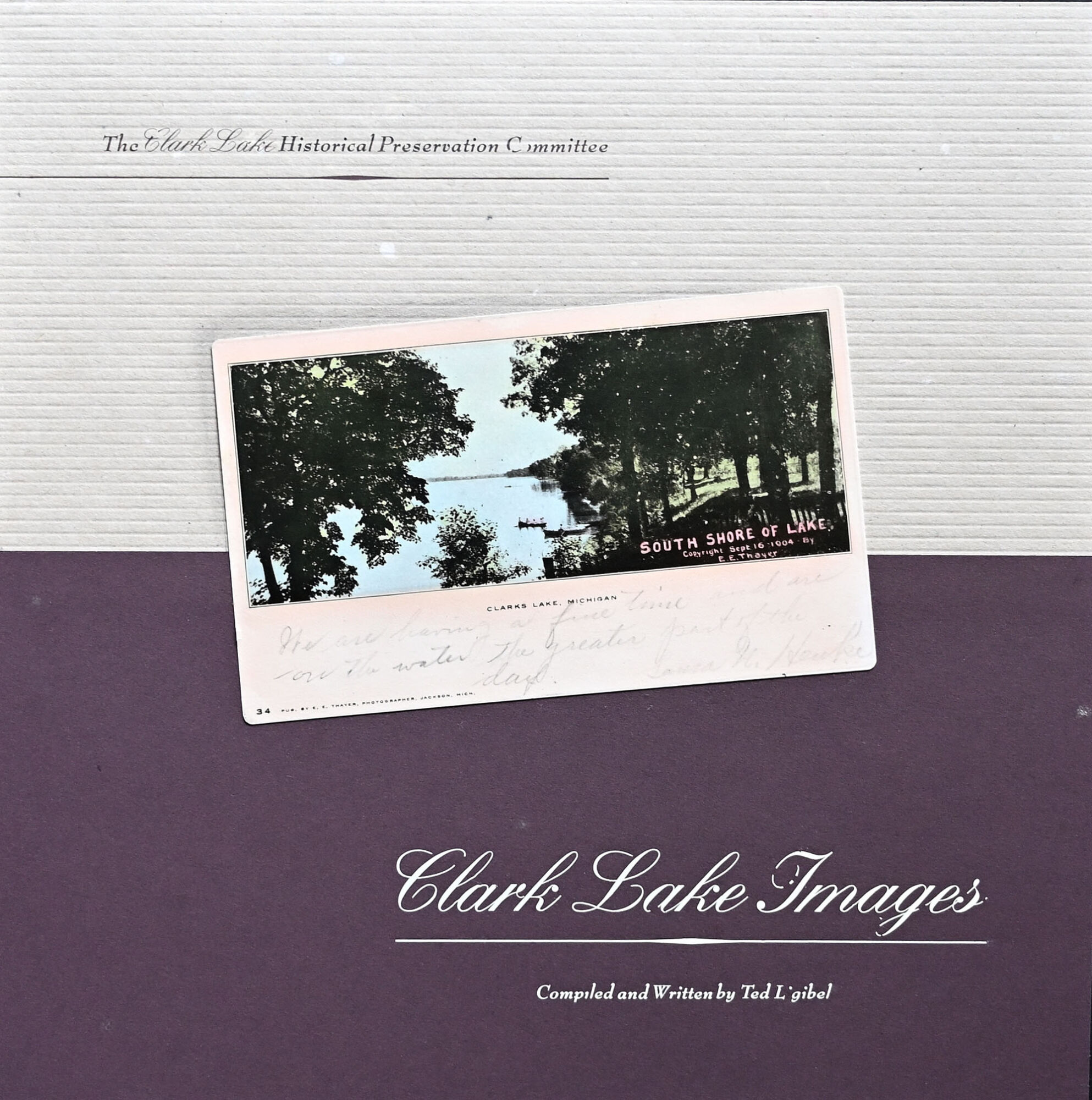