Getting to Know the New Chief

Growing up at Clark Lake, Jay Niles never dreamed that this is where he would become Chief of Police. “As my law enforcement career unfolded, I looked to the day I would serve as chief, but little did I know that it would happen in Columbia Township.”

After his 19 years on the Columbia Township Police force and 10 months as its acting chief, the Township board made his leadership of the department official and named him Chief of Police.

Jay grew up on Hyde Road, attended Columbia Schools through 7th grade, and then entered the parochial school system starting in the 8th grade. On his route to the Columbia Township department, he made stops for academic degrees and training.  It was at Jackson Community College where he received his first associates degree.  At Grand Valley State University, he received his Bachelor of Science degree with a major in criminal justice and sociology minor.  From there, Jay attended the police academy at Kalamazoo Community College, receiving a second associates degree in law enforcement. Before arriving at Columbia Township, his police duty included Homer, Leoni and Somerset Townships, and working as a deputy assigned to the jail division for the Calhoun County Sheriff’s Department. 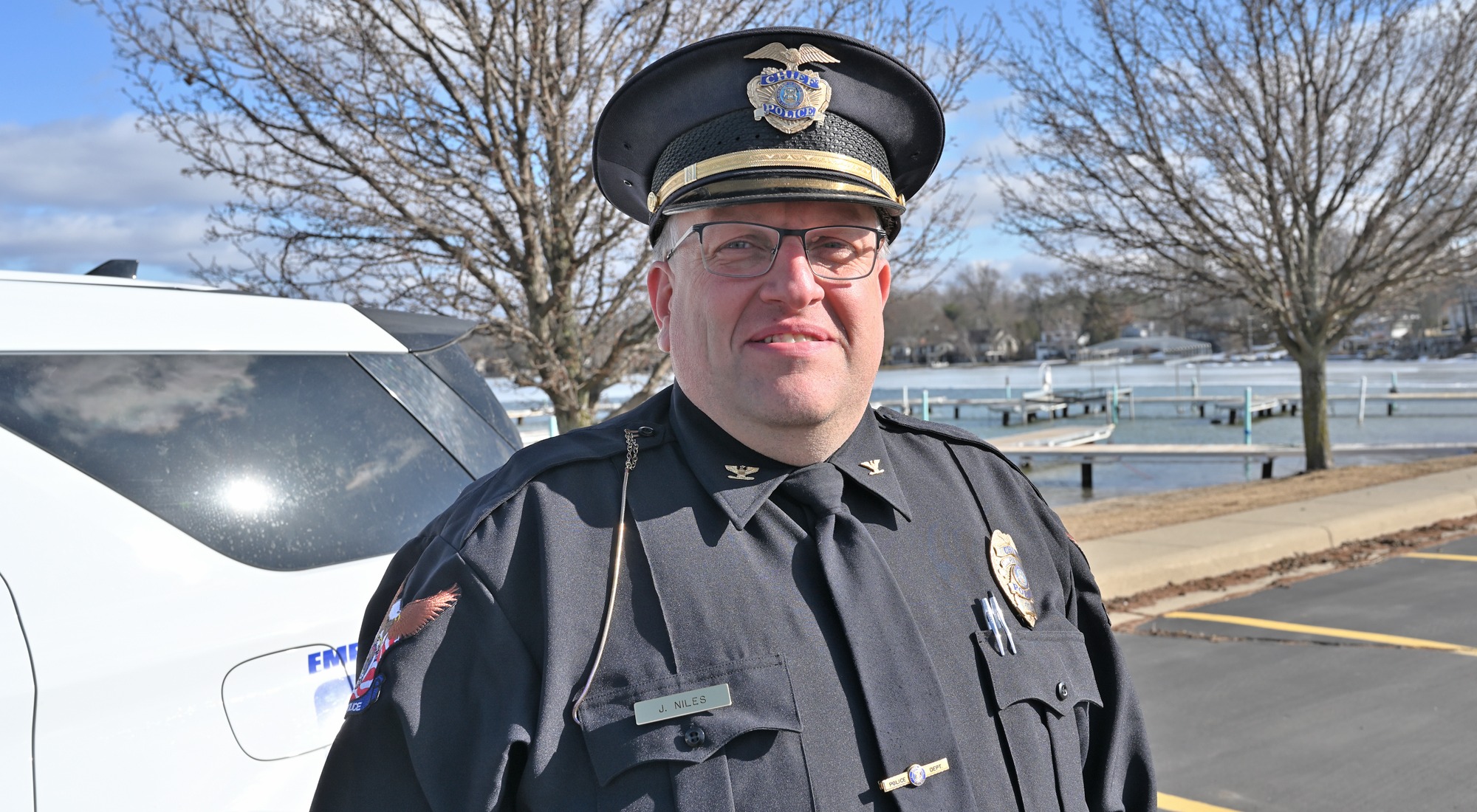 How did Jay Niles decide on a career in law enforcement? “In high school, I was interested in art, but when I got to college, I knew I wanted something that would be more of a challenge.” You never have the same day twice in Law enforcement, according to Chief Niles. “When you put the uniform on the morning, you never know what the day will bring.” Additionally, investigations are like a putting the pieces of a puzzle together, “and I like pursuing them to the end.  It’s a new challenge every day.”

What are those challenges? They could range from rescuing a cat in a tree to investigating or solving a complicated crime. One of those was a murder/suicide case. “While on routine patrol, I was dispatched to a residence in Brooklyn. When I arrived, I found a deceased 12-year-old girl who later would be determined to be the victim of a murder. The suspect was an 18-year-old man who had been babysitting. He was discovered 250 feet away in the woods, also deceased.”  The suspect was Christopher David Charles Seffernick, and this February 2003 event was well-documented in the news at the time.  Sad events like that do occur in Columbia Township, but thankfully they are the exception.  The new chief adds “our department is well trained and prepared to respond to whatever the day’s events deliver.”

What does the other end of the law enforcement spectrum look like? Jay Niles offers this off-the-beaten path story. A young lady called the police from Lansing. Earlier that day, she and her family had been in Brooklyn.  One family member nonchalantly scooped the trash out of the car and put it in a public trash barrel by Shady’s.  By mistake, an uncashed check went with it.  Jay told her, “I will help.”  It was getting late, but still light enough. He arrived at the spot, took the top off from the container, went through the contents, and sure enough there was the check. “I cleaned up the mess, went back to the office, washed up, and called the lady. She said it was the ‘most fantastic thing ever.’” So, along with police work comes some dumpster diving.  “And everything in between.”

Anyone who follows the news knows police face danger. Chief Niles notes “it’s a chronic thing. A traffic stop or domestic dispute could be the last thing I do.” Was there a loaded gun under the seat of the car, or was the person having an argument unstable and armed? Columbia Township is not isolated from criminal activity normally associated with big cities. Jay Niles says “As an agency we train extensively to prepare for our daily task.”  Officers in the department are required to wear Kevlar while in uniform.

What’s ahead for Chief Niles and the department? “Columbia Township is a wonderful community. Our department looks forward to providing 24/7 professional police service. We are fortunate to have an outstanding group of police officers employed by the Township.  We look forward to building and strengthening relationships within the community.”    What else? Going forward, he also remembers, with a twinkle in his eyes, his days as a kid on the lake— swimming, boating, and water sports.  “Every day I feel my roots in Clark Lake and Columbia Township.  It’s great when I see folks out and about that I’ve known for decades.  This is a great place to be.”