Those who sailed in Fleet 58 will never forget the experience.  As Clark Lake prepares for the Fleet 58 Reunion and Regatta on July 6th, some are retelling stories of those days. After all, at one time, Clark Lake had more Hobie Cats than any other inland lake in the United States.  Sailing a Hobie was part of the Clark Lake lifestyle!

On Sunday morning early on a Hobie Cat race day, we looked out in front and saw beautiful Clark Lake, a sheet of perfect glass. It was bad news for us though. I thought, “another freaking drifter!” 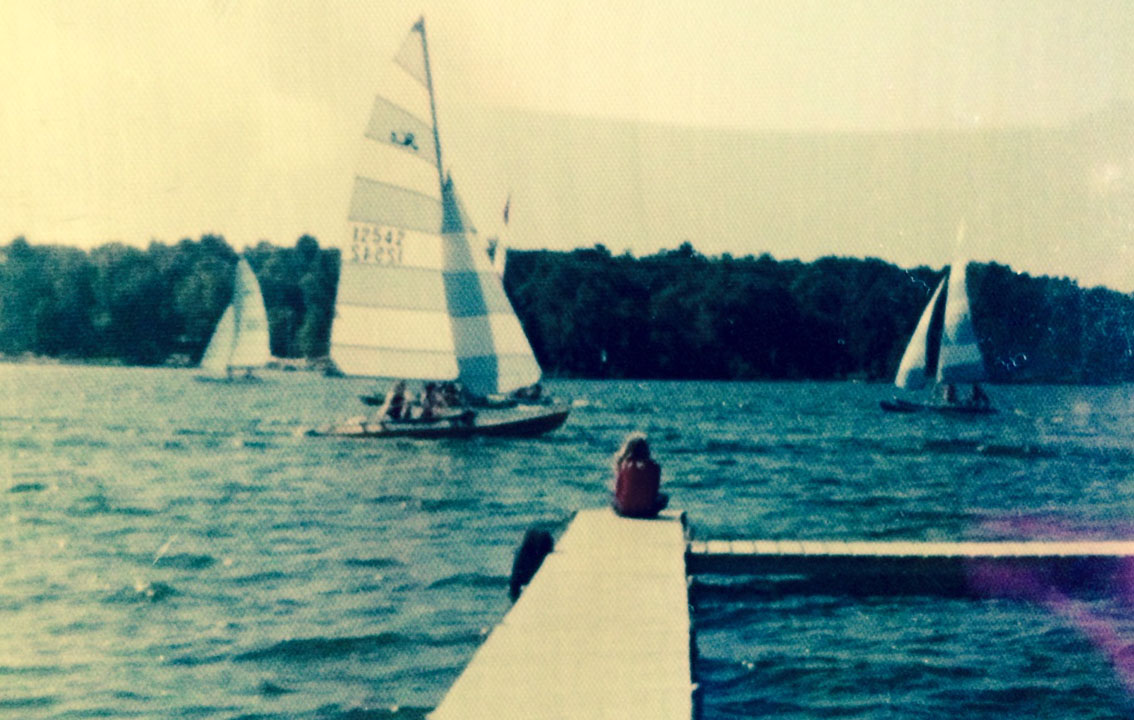 Photo from Becky Burdick Consonni of their boat in Fleet 58. Do you have a photo? Email to clarklakespirit@gmail.com. Thanks!

My brother and I paddled our way to the starting line. When the horn sounded, off we went–sort of. There was a little wind over by Eagle Point. We made it with the other Hobie 16’s to the east end of the lake. We were all at a standstill just bobbing up and down and listening to our halyards bumping against the aluminum masts. BORING.
It was times like these that you would swear under your breath that you had better things to do than sit in a drifter race like this. The sun was beating down and some lucky sailors had friends that were bringing them cold drinks from their motorized boats while we just sat there dehydrating.

It seemed like a lifetime to my younger brother and me—remaining in a stall. Then through some mysterious force, Bruce Clark, who was behind us, all of a sudden caught some wind that seemed reserved only for him. He was the only boat moving! His boat danced around the whole group of 16s. As he moved into the lead, he sang a little tune to us: “Bye, Bye! Been Nice to Know Ya.” He pulled into the lead and was about 25-feet ahead when we heard a sickening sound. SNAP! That was the sound of one of his stays giving out–and instantly his mast fell. No longer upright, it was laying over the water. Luckily, no one was hurt.

Somehow that wind finally arrived to our sails. As the rest of us started to move, and pass his disabled Hobie, my brother and I were biting our tongues. A mast disaster is something you NEVER want to happen during any kind of sailing endeavor. Luckily my Dad, Bob Burdick, was nearby on our raft and helped Bruce.

I never liked those drifter races–but there is no comparison to the exhilaration of sailing a Hobie when there is even a light breeze. You just take off like a rocket.

About the day Bruce Clark’s mast fell, we never spoke of it again–until now. I wish he were here to talk about that fateful day and be part of the Fleet 58 Reunion. We miss you, Bruce.