Altercation in the County Park

This evening (Tuesday) two men in the County park exchanged heated words.  Next, the fight. 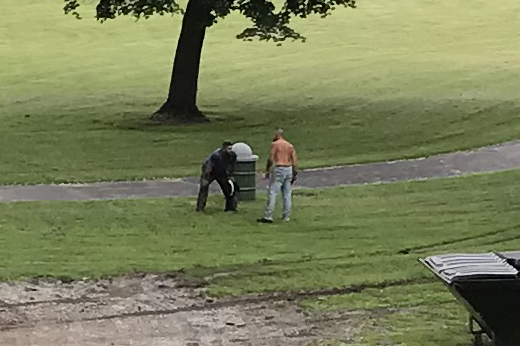 The two confronted each other and fought at the scene near where two vehicles had come to rest as you will see in this video.

According to Columbia Township Police David Elwell, two men “arrived in separate vehicles to ‘talk.’  Things got physical, one went to leave in his car, the second man chased after him with his truck.”

Chief Elwell said there were no injuries, but indicated there may be damage to the lawn in the park.  He added “I believe both vehicles may have been damaged.”  And the driver of the truck was lodged in jail for “felonious assault (motor vehicle).”

The photo and video were taken from the Community Center porch.  The men and vehicles were at the west end of the park, just north of the Spirit Trail.

Several police cars arrived on the scene.  More details as they become available.