A New Level of In Depth Coverage

In-Depth Coverage: I Have to Level with You
by Andy Wilson

In the fall of 2013, having added another boat to the family water-toy collection, I recall taking measurements of the water depth at the end of my dock to determine where I should place a boat lift. I wanted to be able to float on/off the lift without undue effort or the familiar ting-ting-ting when prop and pebble meet.  As with many of these decisions, like buying a boat – the fun doesn’t end there. I had to buy another 40’ of dock to reach water deep enough for the lift, and the financial commitment I had already dug myself into – a challenge many Clark Lakers take on at one time or another.  Since this occurred in the fall, I knew the lake level was seasonally low and unlikely the level would be lower, or so I thought.  Yet, for subsequent years, usually in late-summer/early-fall, I noticed from time to time the boat was stubbornly sitting on the bunks of the lift even when fully lowered, creating a game of onboard musical chairs, shifting passengers fore and aft to nudge the craft off the lift (never unload the beer in this situation).  Undoubtedly a victim of fluctuating water levels and perhaps overzealousness in just wanting to get the boat, lift, and dock in place (enough already). But it raises the question… how much does Clark Lake water level vary?

I speculated the water level of Clark Lake varies by several inches, highest in the spring and lowest, what I call “pool stage”, in August or September.  My novice guess, often accompanied by a studious gaze towards my rocky seawall, and reflecting on bike-ride-rest-stops at the Palmer Dam, was that the lake level varied about three or four inches between high and low levels throughout the year.  Or so I thought.

Depth Perception: That boat is now gone, but fast forward to the massive amounts of rain we had five months ago, in May, with localized flooding of parking lots, homes, and roadways – and my observation that my dock was looking more like the edge of an infinity pool as the lake level kept rising.  Cue up Eddie Money’s “Walk on Water” (RIP)… I wanted answers. 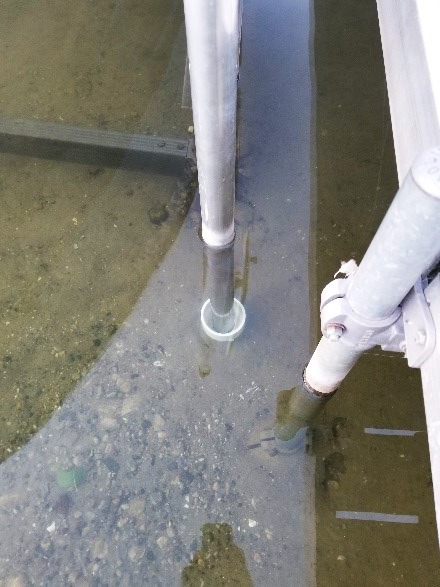 On the level: As occasional pandemic-produced insomnia allowed my mind to wander, a wave came over me and I conjured up a water level gauge, hit the interwebs with credit card in hand, and thus began a train of UPS/FedEx deliveries bearing supplies.  A final trip to Pittsford, MI for a “permanent auger”, and in late July I finished making water level gauge ver. 1.0.  Designed to be removed in the winter when the ice arrives and reinstalled in the exact same spot in the spring to measure water levels throughout the non-ice season.  The permanent auger was twisted into place in the lake bottom, fitted with a removable aluminum tube that houses a series of floats, and a polycarbonate measuring rod that rises and falls with the water level.  A second clear poly tube provides easy readability at the top lip.  In the event of a complete disaster causing the bottom auger installation point to change (ice flow, propeller damage, or perhaps a raucous game of Beersbee – anything could happen, right?), a subsurface elevation was recorded and marked on a nearby land-based concrete foundation.  This mark can be used as a reference point for accurate post-disaster auger reinstallation.

My First Date: To create a point in time to reference how much the level has increased or decreased from its installation date, I choose August 1st as the “Zero” date, setting the gauge to “0” at that point (gotta start somewhere, Charlton Heston would be proud).  I suspected the lake was near “pool stage” on that day and, besides, it is easy to remember going forward.

Within three days after installation, we received .92” of rain.  This, combined with the runoff from surrounding areas, raised the lake level 1.375”.  Intriguing.  It will be even more interesting to see what happens in bigger rain events, long spells of drought, etc.

Low Tide: Several weeks later, the lake reached new lows for the season… creating a quandary – do I reset the “Zero” mark to the lowest level of the non-ice season, or keep the August 1st date as the benchmark?  I’ve decided to take a wait and see approach.  I think this is somewhat how the Fed adjusts interest rates. 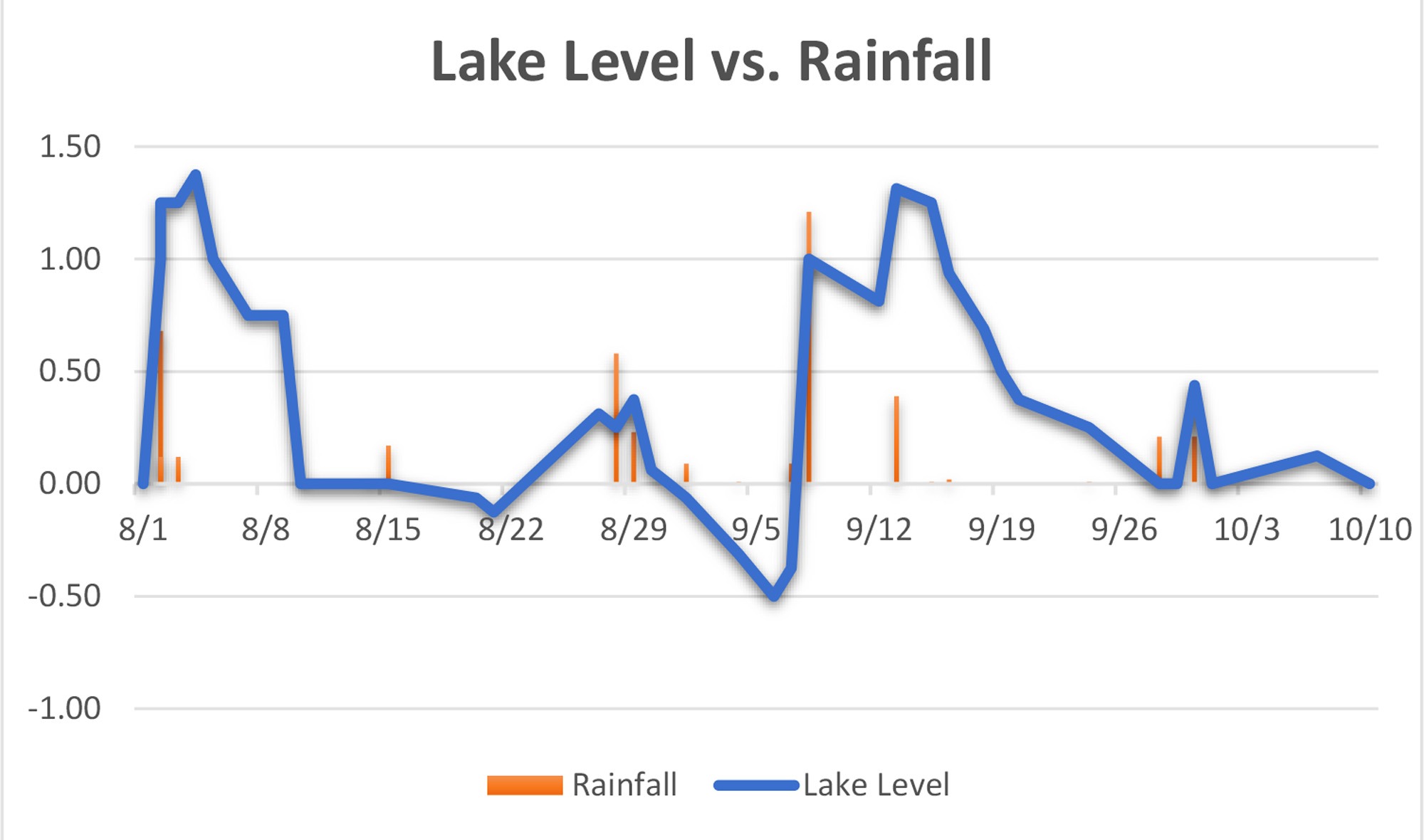 Size Matters: Incidentally, I did make a visual note from pictures of the lake level during the high water in May, and the lake is down 8” from that high point. That 8” is equivalent to 126,000,000 gallons of water, almost 4% of the lakes volume.  To visualize, that’s about 190 Olympic size swimming pools… or, if you had a container, the base of which is the size of the Beach Bar parking lot, it would be filled 386 feet tall – more than twice the height of Jackson City Hall.  Hard to fathom.

Water Over the Dam: I began to think, what’s really in play here that changes the water level?  Certainly, more than rain/snow – in, water over the dam – out.   Water comes in from the changing aquifer pressures in the form of our artesian wells, conversely, we lose water from evaporation, lawn irrigation, etc.  I’ve learned that some areas adjacent to Clarklake were originally fitted with drains approximately 80 years ago.  Over time, the drains have failed, some have been replaced, but many have not.  Rather than directing runoff to the lake, some areas may have regained their swamp-like properties, perhaps yielding less drainage to the lake, as these areas revert to the natural retention-ponds they once were.

This is Deep: There are other points to observe as well.  Bodies of water like Lake Michigan have very evident oscillations called a seiche (sēch), often driven by the wind, where a standing wave changes the water level near shore.  Essentially for Clarklake, a day with strong winds from the west could mean higher water levels on the east side, lower on the west side. If you look at an aerial view of Clarklake, the easterly sweep of Eagle Point’s tail, and the visible hammer-shaped flare appearance of the far eastern shoreline, could indicate that 10,000 years of wind and water played a role in these shapes.

Though Clark Lake is minuscule in comparison, I have wondered if the east – west orientation favors a measurable seiche during prolonged winds events.  To measure this, adding two more depth gauges, one to the east end and one on the west end would provide some data.  A winter-based water level gauge could be placed within the bubbler zone at Eagle Point to provide year-round level data.  As I begin to understand the nuances of the measurements and the gauge design, it would be informative to add east and west gauge locations – maybe with willing spotters, in the future. 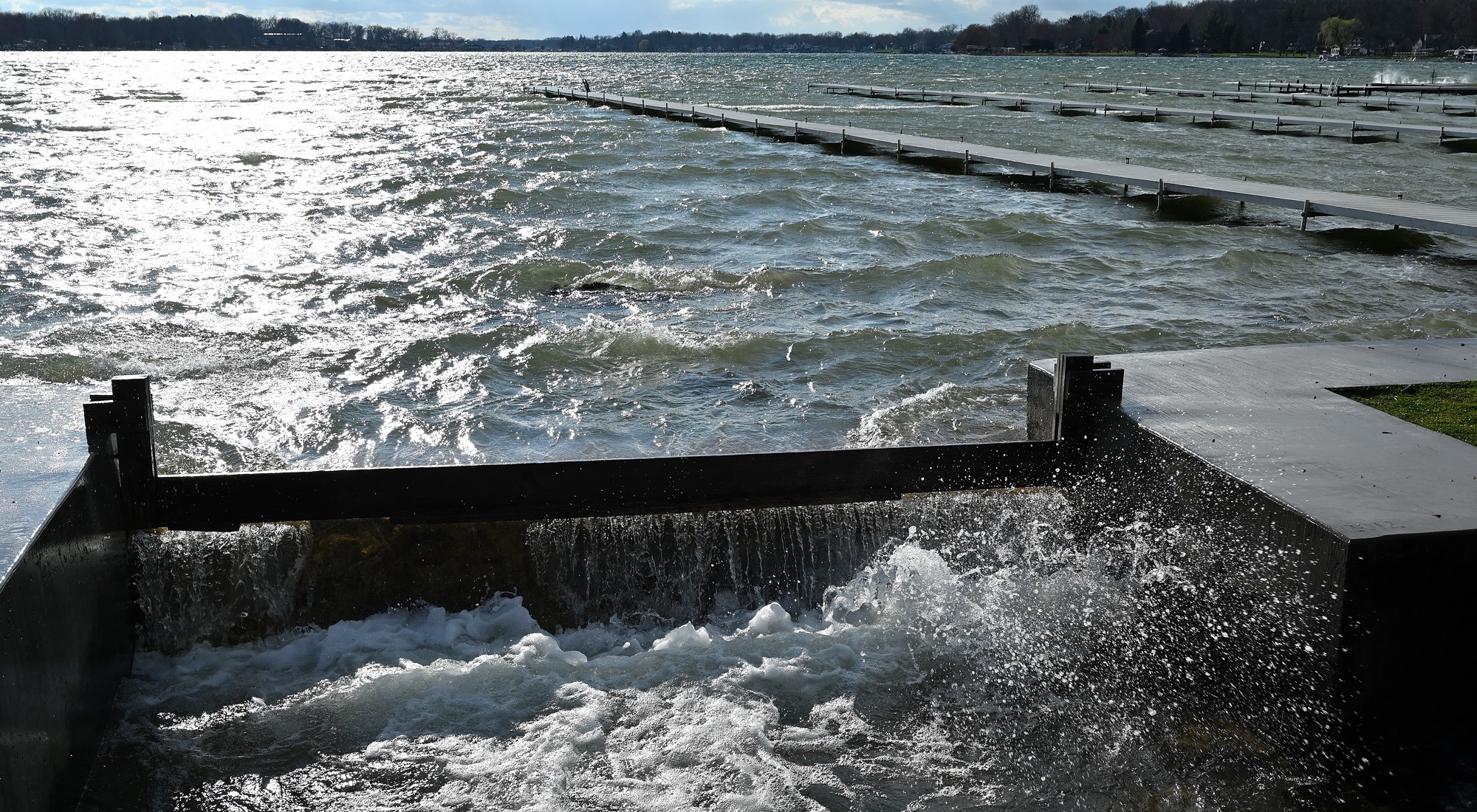 In a piece published yesterday, read about the abnormally low lake level in 1953, including what may have triggered it.  The article is in the Historical Perspective section of this website.