Not too unusual to hear fish stories around lakes, and Clark Lake is no exception.  The Eagle’s Nest has several, and the origin for this one occurred not in Michigan, but found its way to Clark Lake.

When you enter the Eagle’s Nest from the parking area, take a sharp left turn.  You can’t miss the giant marlin on the wall.  The Clark Lake story behind it began 4 ½ miles off of Kauhi, Hawaii where Dan and Donita Baker were fishing.  They counted their good fortune as they caught several amberjacks 12 to 15 inches long.  Then, the surprise of a lifetime.  Donita’s line went taut, there was thrashing in the water. Donita had hooked a 16-foot marlin.  Whales and sharks circled, other boats gathered for the show.  Several hours later, and after several attempts, they brought the tired-out fish to the boat.  What to do with the catch?  Donita decided that such a beautiful creature should be allowed to go free.  So, they released it.

The marlin you see in the Eagle’s Nest is a 10-foot replica that Dan and Donita commissioned to commemorate the adventure.  But the fish story doesn’t end there.  Now on its way to the Baker’s Clark Lake home, the large delivery truck couldn’t make the sharp curve on Woodland Drive.  Dan and Donita’s kids loaded the crate onto skateboards to push it home.  Their kids joked that when their dad died, the replica would become his coffin.  When Dan passed away in 2015, that didn’t happen.  But the fish story lived on, and offered a smile at a time when it was needed.

When Donita moved to her new home, the fish moved to its new permanent residence at the restaurant.  But how to get it to Eagle Point?  This being Clark Lake, it happened on the water.  Donita borrowed Susie Creech’s raft because its sea legs offered stability.  Donita’s neighbor, John Rousseau, helped Donita load it onto the raft, and away they went to the Point.

The marlin is brought through the door. 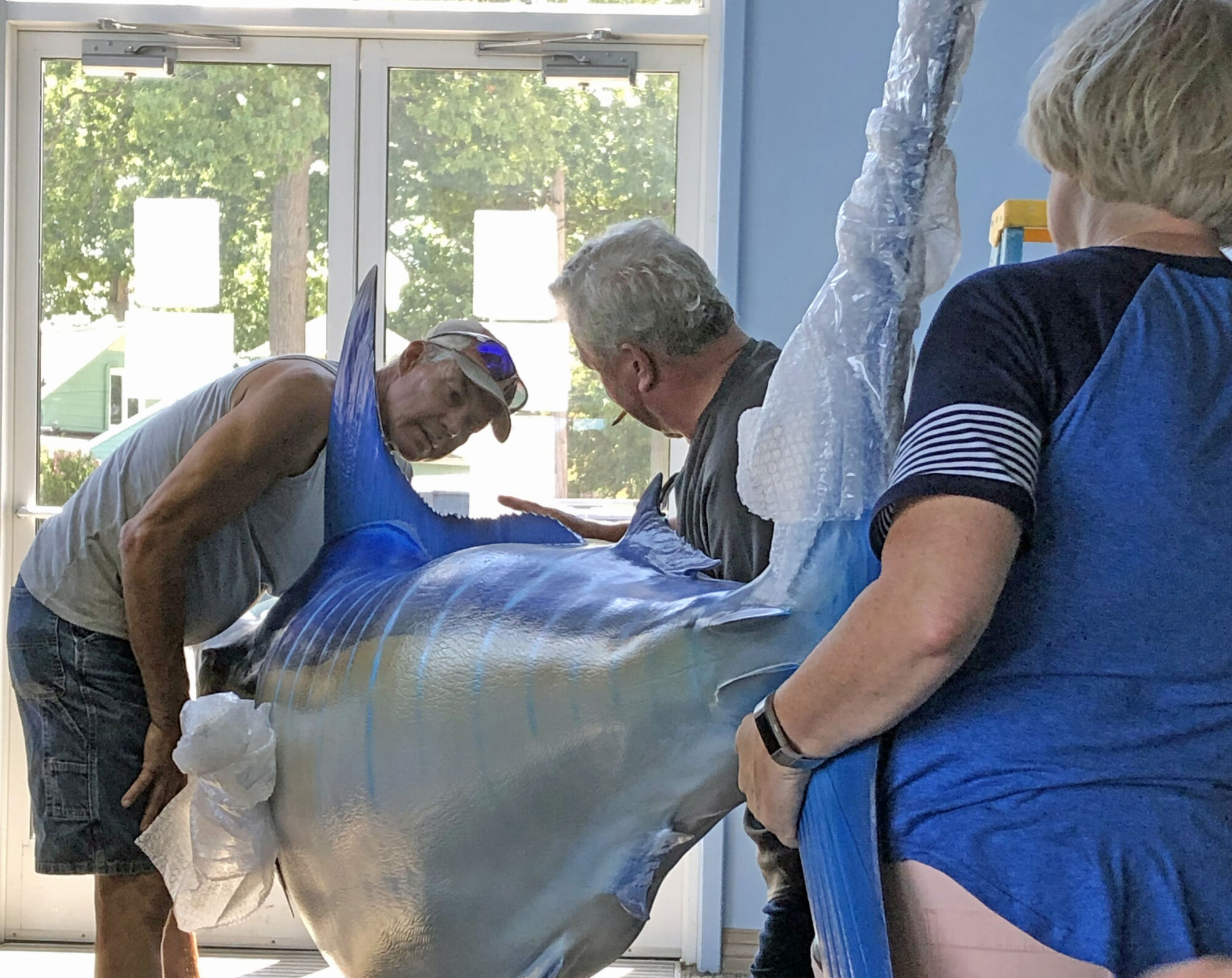 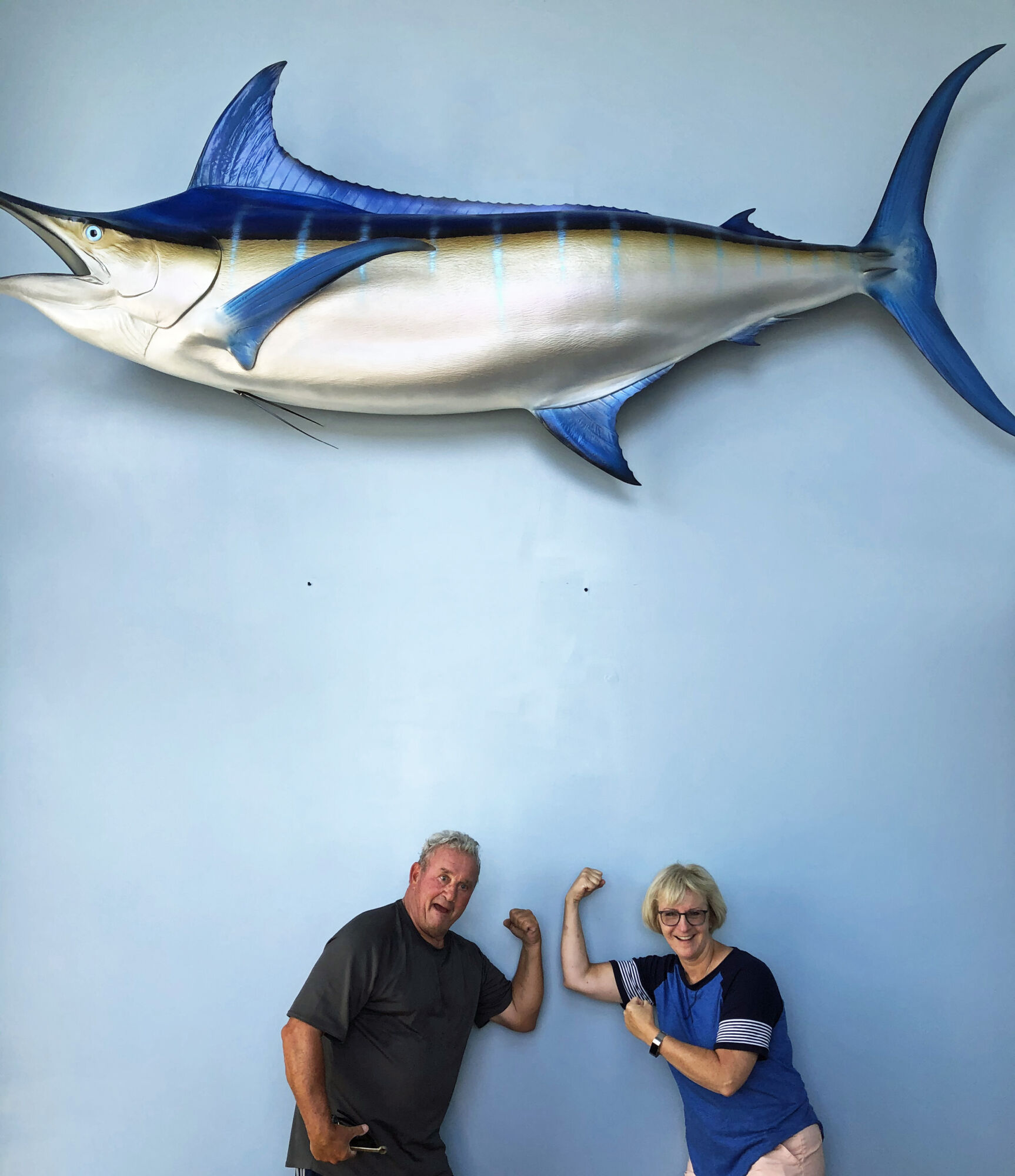 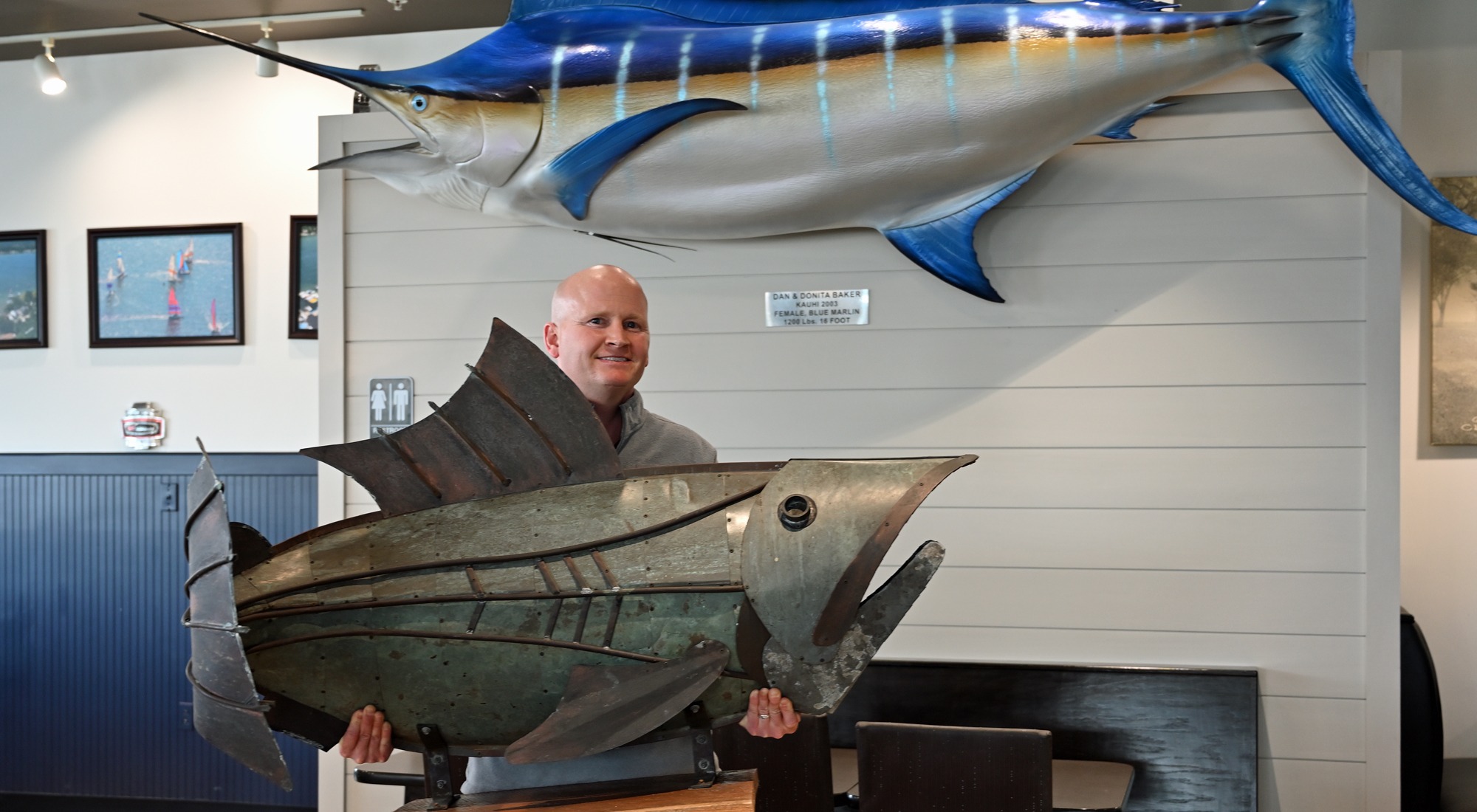 Recently a sculpted fish returned to the Eagle’s Nest after five years.  Mike McKay had secured it during the restaurant’s previous transitions and had been on display at the M-R Builder office.  Now back home, here’s Eagle’s Nest owner Blair Huff with the fish. 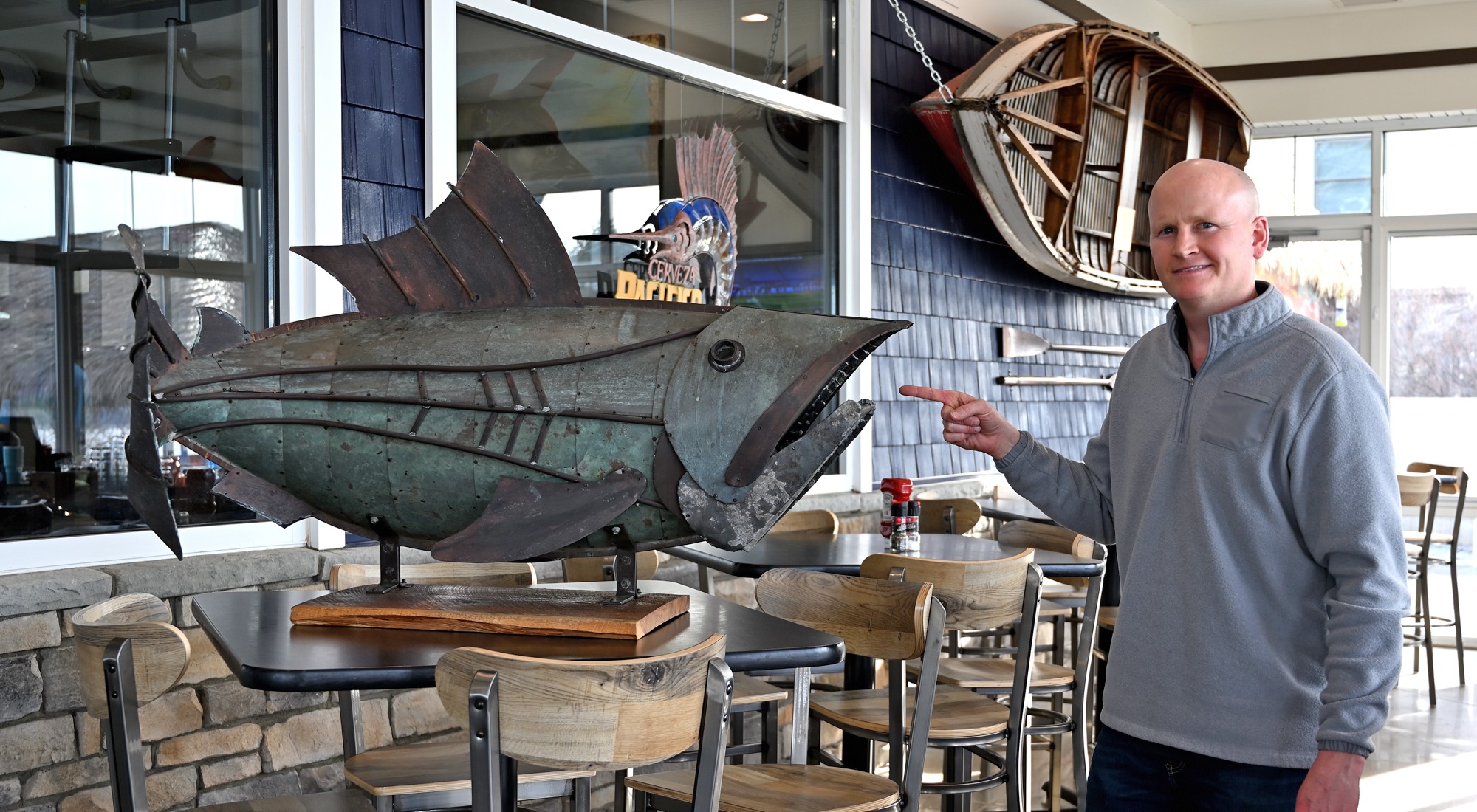 But as Blair has said, “it’s a fish with no name.”  So, he is offering a 50-dollar Eagle’s Nest gift card for the best name (a drawing will decide if more than one entry comes up with the name chosen).  Blair says email your idea to namingthefish@gmail.com. 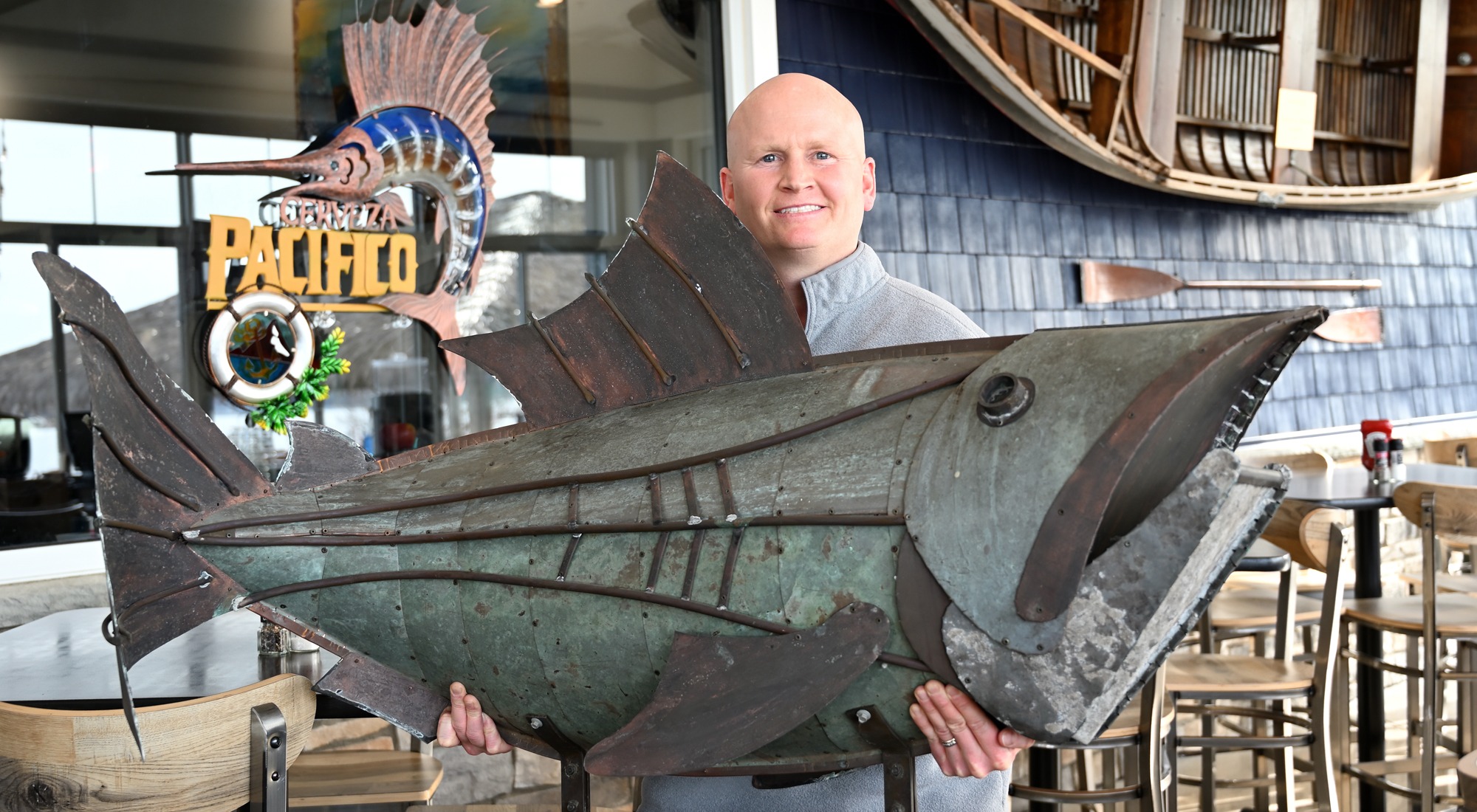 Does the fish story end here?  Nope.  The artist who created the fish with no name worked for awhile in a studio at Clark Lake.  Jim Simpson also created the three fish that hang outside near the parking lot entrance. 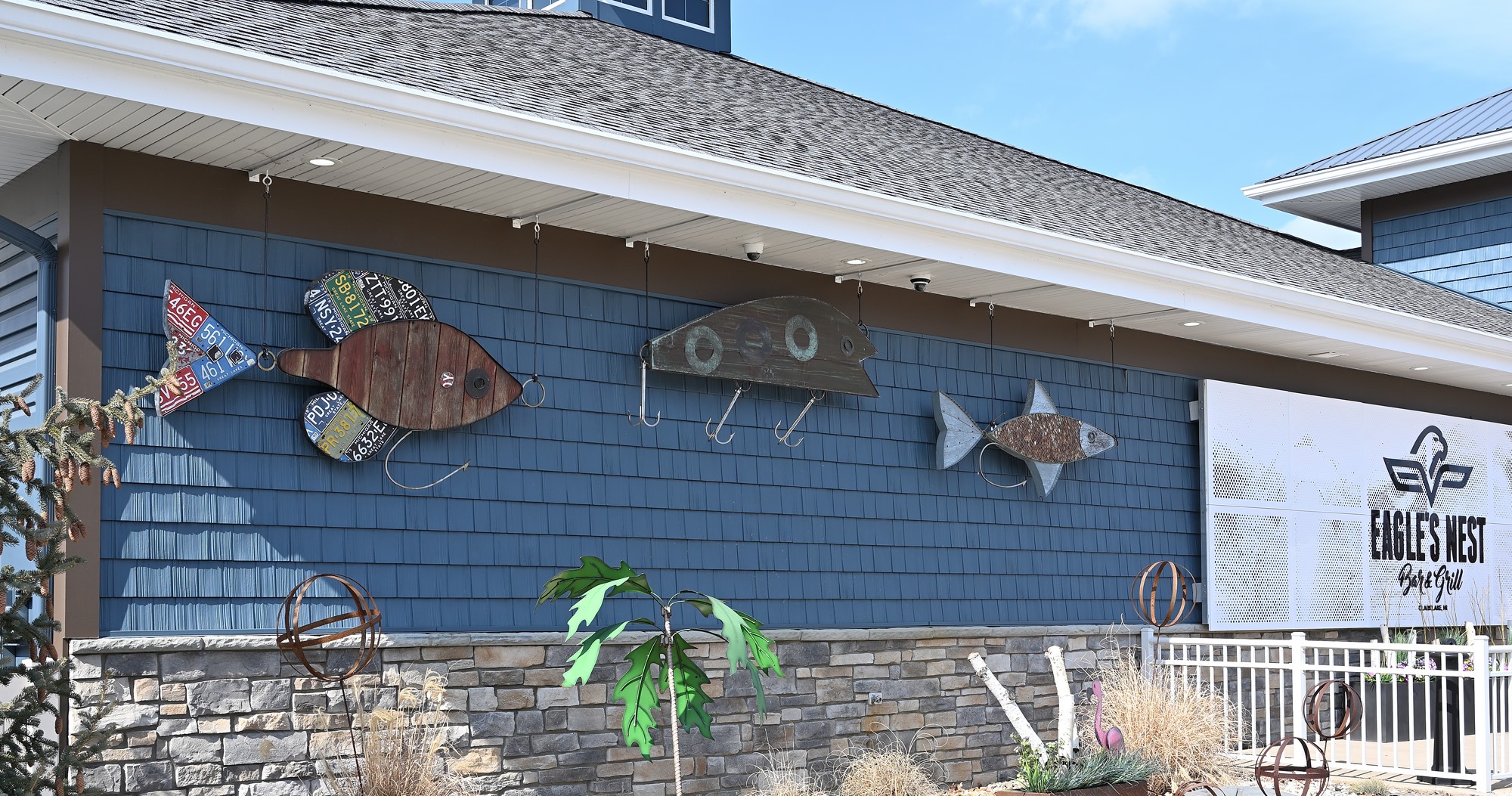