This is a true tale, written by Rick Belcher who lives at Clark Lake. He grew up in Toledo, attending elementary and high school there.  He spent every summer at the most wonderful place in the world–the lake. 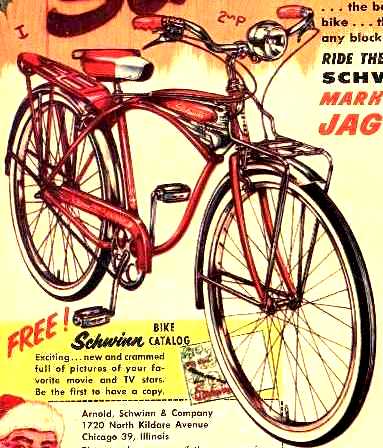 Schwinn Jaguar Corvette Mark II in all its glory

I had become fascinated with bikes, and one bike in particular. In my mind it ran circles around any other bike that ever existed. The bike I had fit me okay, but my dad had bought it from a neighbor. It had big fat tires and no gears. And it wasn’t cool. The bike of my desire, on the other hand, was HOT! The Schwinn Jaguar Corvette Mark II had no match, and it was no surprise that it was also the most expensive.

I had fallen in love with this bike on the mile walk home from DeVeaux School. There were several ways home through the Hampton Park neighborhood, but at this point only one existed in my world. I stopped every day at Lester’s Bike Store to feast my eyes on this beauty. It was deep red—opalescent red–and absolutely glowed. It also had plenty of chrome that reminded of me of some cars that I admired—the Buick Roadmaster or Cadillac DeVille (they all had lots of chrome AND electric windows!). This bike had a light on the front and a very special one on the back. There was a three position switch. In the on position, the light brightly shined. When you put it in the third position, it turned on when the bike sensed that you were slowing down. BRAKE LIGHTS ON A BIKE! Of course it had a horn, and it was cleverly part of the chrome/deep red affair that fit over the strut between the seat and the handlebars. The tires weren’t fat like the ones on the ugly green bike that I had. They were the new narrower kind, not the so-called English tires, but the new in-between models, much like on hybrid bikes today. And to top it off, it had white walls.

As I went to sleep at night, I would contemplate owning this bike. And during such moments, I realized there might not be much need for tires, because this bike could FLY. In cases where you were on the ground, though, the tires would work just fine. And most importantly to get you up to take off speed, you could change gears. There were not two, but THREE positions. No one I knew had a bike like that. No more struggling to pump that fat-tire bike up a hill. If I had the Schwinn Jaguar Corvette Mark II, I could downshift! Definitely the best bike any kid could have. 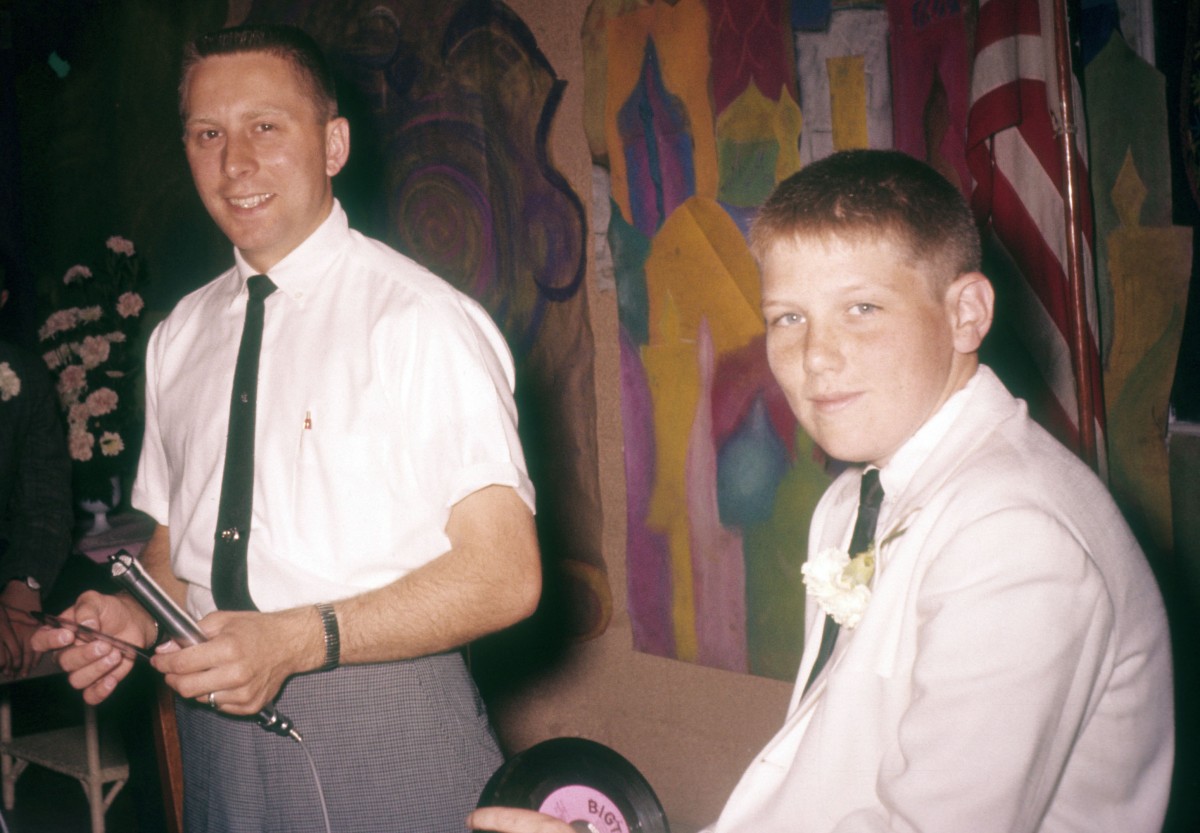 My parents knew I wanted this bike in the worst way, so it was definitely at the top of my Christmas list. But as I said, this Christmas was “complicated.” I also had become fascinated with radio. I would wake up listening to Chuck Parmelee on WSPD’s Alarm Clock and drift off to sleep listening to Rendevous with Lou on WTOL. Lou Fiedler would begin telling a story and suddenly the song would start at the point where the lyrics would carry the story forward. The only thing that got in the way of that was dastardly Cleveland Indians baseball games. Ugh. But there were alternatives. There was also Ted Barbone in Your Microphone on WOHO. He did something that was amazing that I hadn’t heard on the radio before. He sometimes would go from one song to the next without talking. How did he do that? I always imagined that in the studio, the DJ would have a set up like I saw at West Toledo Y dances. The DJ there had a microphone and a turntable. While he was talking, he would put another record on his turntable. So when Ted Barbone played two in a row, I concluded that he had a tape recorder handy on which he had previously recorded a song. When one song ended, he would play the second one from tape. My love of radio was fierce. I had built my own radio station in the basement. I had absconded with my sister’s record player from her bedroom and my father’s Voice of Music tape recorder. I, too, could do “twin spins.” 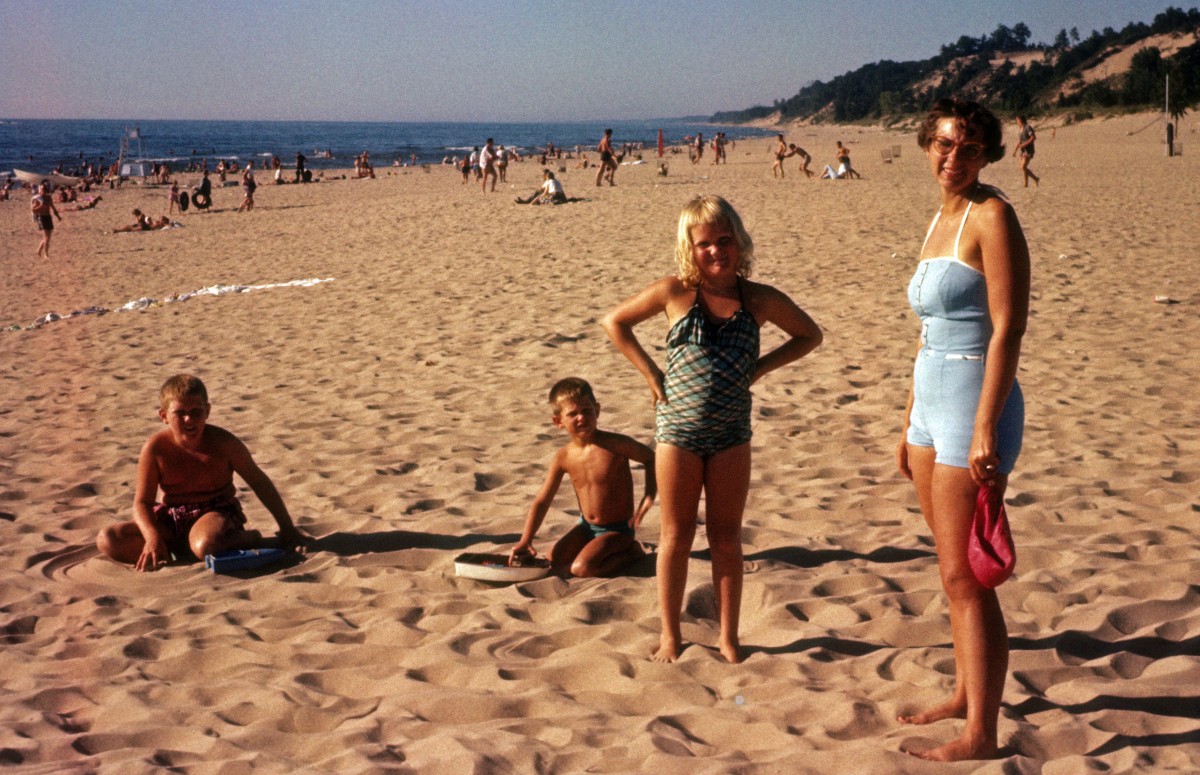 The trip to West Michigan. Left to right: Rick, Buzzy, Amy, Mom. The toy boats in front of Rick and Buzz were heavily used at Clark Lake. Because they were favorites, they became part of this Lake Michigan adventure.

Then came the moment of enlightenment. On a family summer trip to West Michigan beaches, we were riding in the car one evening after dinner. I spotted a radio station and started to work on my dad to stop there and take me in to see what it was like inside. It took some of my best persuasive skills but it worked. It was after hours so my dad rang the doorbell. My father was accustomed to having things go his way, and this was no exception. His years of selling expansion bolts finally came to mean more to me! He spoke to the DJ and convinced him to invite us in.

I watched with the ultimate intensity. And I now I knew the truth. Not just one turntable, but three! And some tape players called cartridge machines (something like an 8-track) that he used to play commercials. As the DJ started to read a newscast that he had pulled off the teletype machine, he started one of the turntables and it continued to run. A sound effect of a teletype machine! “Here are the top stories on WFUR, Grand Rapids…” Okay. Now I knew what I needed to get. I already had the tape recorder, one record player, but I needed a second turntable so I could do twin spins like Ted Barbone. And by the way, it had to be a turntable, not a record player. I spent hours scouring Allied Radio and Lafayette Electronics catalogs and found the turntable that would do the trick. I had an inkling that I might not get the bike, so I also asked for the turntable. At least that could save Christmas!

It seemed like the morning of December 25th would never arrive. But it did. Early that morning, the three of us were at the top of the stairs. Dad and mom, grandpa and grandma were downstairs. Then dad gave the signal, and down we ran. The tree seem to have endless bounty around it. It was a very good Christmas with many, many gifts. But no turntable, much less a bike. I had given up on both. After most of the gifts had been unwrapped, there was one package wedged behind the tree. Dad told me to reach under the tree…and it was for me. I opened it, and it was the turntable! Wow! I now had the ability to do twin spins, and that was very cool. Thanks, mom and dad! What a great Christmas! Then dad took me aside and said quietly “there is package in the garage for your mother—it has her name on it. Go out and get it, please.” So in my bathrobe and slippers on that cold Christmas morn, I went out to the garage, opened the door, AND THERE IT WAS. The SCHWINN JAGUAR CORVETTE MARK II. The coolest bike in all West Toledo! Of course it was winter, not a good time to ride a bike. There were days, however, to try it out. After that, bike riding was never the same. And for a while, life was not complicated.