Elaine Ibold Heile’s Clark Lake Story comes in the form of a letter written at Christmastime, 1991.  The letter was addressed to her nieces and nephews and told of her family’s experience at Clark Lake.  Part of this Christmas gift was Ted Ligibel’s Clark Lake book.  The recipients were Fritz Wilger, Michael Wilger, Ellen Hiltz and Emilie Dressler.  Fritz provided the letter for this My Clark Lake Story, and he has included references in brackets for further explanation.  Today, Elaine lives in Vero Beach, Florida.

Clark Lake has fans from all over the country, and many established permanent connections here.  In the late 1800s, the Cincinnati Northern Railroad made Clark Lake as a vacation spot for those looking to escape the heat and humidity of the Cincinnati and Kentucky region.  And there were other reasons as you will learn.  Through the years, those connections strengthened for some.  This story tells how the Ibold’s/Wilger’s first came to Clark Lake along with the memories that came with it.  Today, Fritz Wilger and his family look out on Clark Lake from their cottage on the north shore, east end.

[After your grandmother, Lee Mackentepe] married Walter Ibold, and children arrived, the time came to look for a summer place.  She was most definite about wanting a safe small inland lake, where her children could swim and boat in safety.  Your grandmother and her father took off on a tour of inland lakes, and after visiting several, decided Clark Lake was the place.  This was, I believe in 1932.

The first two years, we rented a cottage down by Eagle Point, from Rollo and Virginia Every.  It was a very simple cottage, three bedrooms, a bath, kitchen, and living room with a porch.  There was no hot water heater, but we had a stove, and an ice box—and the ice man came by horse and cart.  The ice was cut from the lake and stored in sheds, scattered around the lake.  The Newburg cottage was originally an ice house.

[Newburg  was the name of the owners of the home that sits just east and back from the lake of the Petykiewicz home.  Petykiewicz home sits on the same lot as the cottage that that Fritz’s grandparents, Walter and Lee Ibold purchased in 1955 at 2168 South Shore Drive. It’s where his family spent summers though the mid 1980s.] 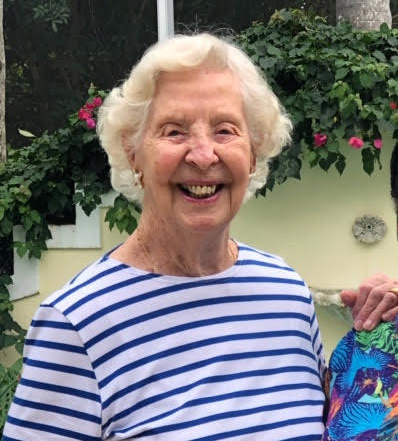 After two summers, we moved and rented from a family by the name of Buchannon from Cincinnati, Ohio.  The cottage was the fourth cottage, west of Hayes cottage.  It has since been torn down and replaced by a round cottage [The cottage isn’t actually round. Because it doesn’t sit parallel with the shore, it appeared to her to have that shape.] Mother always said it was an air conditioned cottage—the air flowed in and out.  It was one board thick, and in spots, you could look right through it.  We all thought it was wonderful.  There was a summer kitchen, that had a cement floor, lattice and screen for the walls and a roof.  This area had a sink, where the dishes were done, a refrigerator and a hot water heater—joy!  But it was subject to the weather.  The stove was in the kitchen, which had a table and chairs and where all the utensils were stored.  There was a dining room, living room, fireplace, big screened porch, one bedroom and a bath downstairs.  We had four bedrooms upstairs.  Mother and Daddy slept downstairs, which was just as well, as a lot of shenanigans took place upstairs.  All the bedrooms upstairs had double beds, and the spare room had two double beds.  The walls of the bedrooms only went up about seven feet, which didn’t allow much privacy, but we had a lot of fun tossing things over, such as crawdads, worms, turtles, and dead fish.  Poor Marion was usually the victim, as she hated anything that crawled.  Carl Berger was usually the instigator of such pranks, which made it more fun, because if it had been me, I would have been killed. 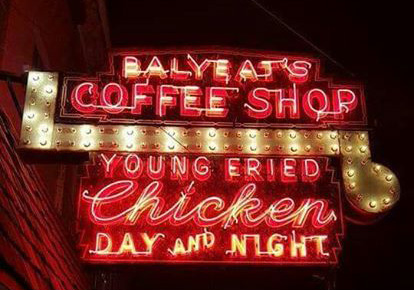 There was much preparation getting ready to go to the cottage.  We had to bring our own sheets, blankets and towels, plus our clothing.  School was out. [The first Friday of June and within a week], we were headed north.  The car was packed the day before we were to leave, with the usual lament—it will never fit, we don’t have enough room, etc., etc. We were up early and on the road by 8 am as it was originally a ten hour trip, eventually shortened down to five hours.  Mother would drive, the maid and Marion in the front seat, and the dog and I were wedged into a tiny space in the back, with all the blankets and linens.  We always, always stopped for lunch at Balyeat’s [Coffee Shop] in Van Wert, Ohio, and the dog would sit under the table.  Daddy would wait until we were all settled at the cottage, then come up later, always bringing a guest.  Our first guest was always Margaret Grote, mother’s best friend.  She was always coming for just a short visit, but always stayed the whole summer.  We loved her dearly and called her Aunt Margaret.  Now Aunt Margaret was used to purchasing huge quantities of food for her parents and brothers, so whenever a vendor would come to the door or she would go to market, nothing less than a bushel basket of each item would be bought, and unfortunately green gage plums were her favorite—not ours.

Food was purchased several ways.  In the early years, vendors with horse and cart would come to the door.  We also had Jackson’s finest–Henry’s Food Market, which delivered twice a day, and the old reliable stores around the lake, plus also the vegetable stands—in later years. The only trouble with Henry’s market was—we had no phone!!  Mother’s good friend Mrs. Smith who lived three doors away allowed us to use her phone.  Not us children—only Mother.

The favorite meal, and served quite frequently was grilled steak.  Mother grilled steak before it ever became popular—also lamb chops and hamburgers.  I remember one evening—the maid started yelling, and when we all ran to the back—there was a huge bull staring at the meat on the grill.  He had escaped from Hayes Farms. 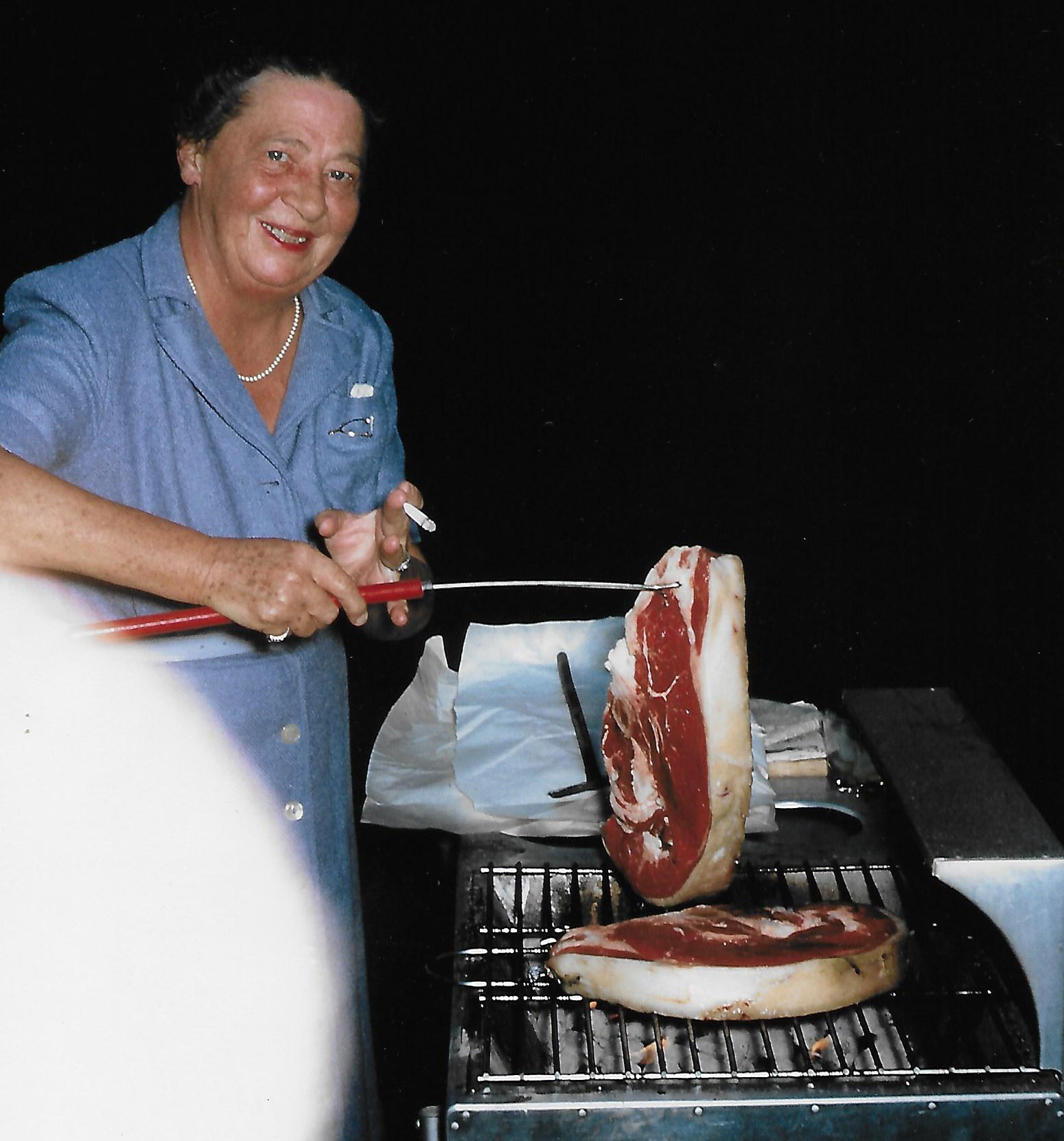 All the laundry was taken to some woman, on the way to Brooklyn.

Since we only had one bathroom, it was requested that people please use the outhouse, connected to the garage –out back.  Marion hated it, because there were always spiders in it, but we all used it, and decorated it with cartoons, which were changed frequently, which kept us all returning.

We always had guests and relatives visiting us.  Since all the beds were double, we were always doubling up to make room for everyone.  One year, the Unnewehr’s came to visit, Aunt Lottie, Uncle Ed, Margie [Marge later married Charles Schott and later became the infamous owner of the Cincinnati Reds. She was a cousin of Fritz’s mom and Aunt Elaine].   They arrived with sweaters, mittens and snowsuits!! Uncle Eddie had heard Michigan was cold—so they came prepared.  Carl Berger was a frequent guest, always fit us in with his business trips. Always the first morning he was there, we would get up at daybreak and go turtle hunting!!  We’d always return with about 40 or 50 assorted sizes and species.  Most we would release, but we had to keep a few to toss over the rafters at night.  Marion’s revenge was to “French” our bed—or let turtles loose in the cottage, and announce it hours later—which meant I had to get on my hands and knees and do a thorough search for the critters. 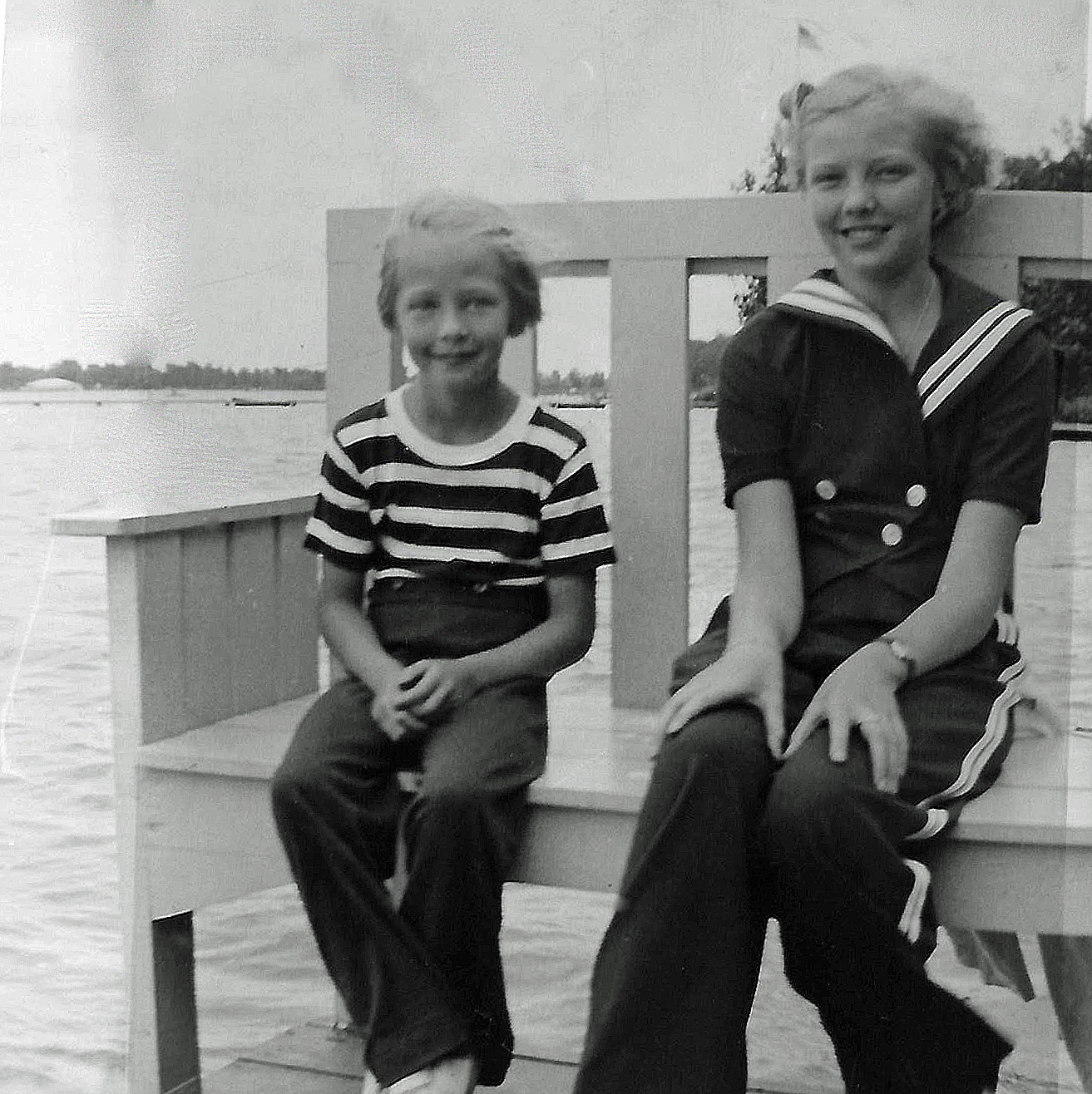 Elaine, who wrote the letter is on the left.  Marion Ibold Wilger, Fritz’s mother is on the right.  This photo was taken in the early 1930s, and you can see the Ocean Beach Pier in the distance.

Marion was always surrounded by boys, and there were a lot of them around.  On her 16th birthday, she had a great party.  On that day, Daddy arrived driving a black convertible, with red leather seats and a white top.  Marion was sensational in it, but Mother always claimed Marion’s birthday was just the perfect excuse for Daddy to buy himself a convertible.

At some stage, Marion had a crush on Randy Arksey, whose father owned the hardware store.  Marion and Mary Geisler Burns would make daily trips to Brooklyn to bother Randy.  The only thing they could think to purchase were fishhooks.  We had large, small, medium, huge and tiny ones.  We had more fishhooks than everyone combined on the lake.  Daddy always threatened to sell them back to Arksey.

During all these wonderful summers, there were terrible epidemics of polio in the cities.  Mother felt we were safe at the lake away from crowds.  So when school started, we remained at the lake for a few extra weeks until it turned cold, before we headed south.  Not until I became a freshman in high school did the nuns ever complain about our being late for school.

The war came, and all the boys disappeared into the service.  Even though gasoline was rationed, we still managed to get to the lake.  It was dull for Marion, but my friends were still around.  Our maid got married, so Marion and I had to share the chores.  During the war years, Jane Bohmen spent the summers with us, and what a ball we had. Marion would help Mother before dinner, and Jane and I would get the clean up detail.  As we would leave the table, we would “time it”, and race to do the dishes, etc., trying to beat the “record.”  All of this was done while singing the latest hit song at the top of our voices.  All this action took place in the summer kitchen and we could be heard for miles, but no one ever complained—except Mother and Marion.

We sailed, we swam, we aquaplaned [water skied], walked down to the Point for hamburgers and malts.  We played a lot of Michigan rummy—read books, visited and had a marvelous time.  Remember—no phones and no TV!!

The war ended, and Gene, [Fritz’s father] started appearing at the cottage, then he disappeared for awhile, and he next appeared, he and Marion [Fritz’s mother] announced their engagement, with a date for an October marriage.  Such excitement—so we hustled around—packed up and raced for Cincinnati, not knowing that we would never return to that old cottage in Hayes Grove. 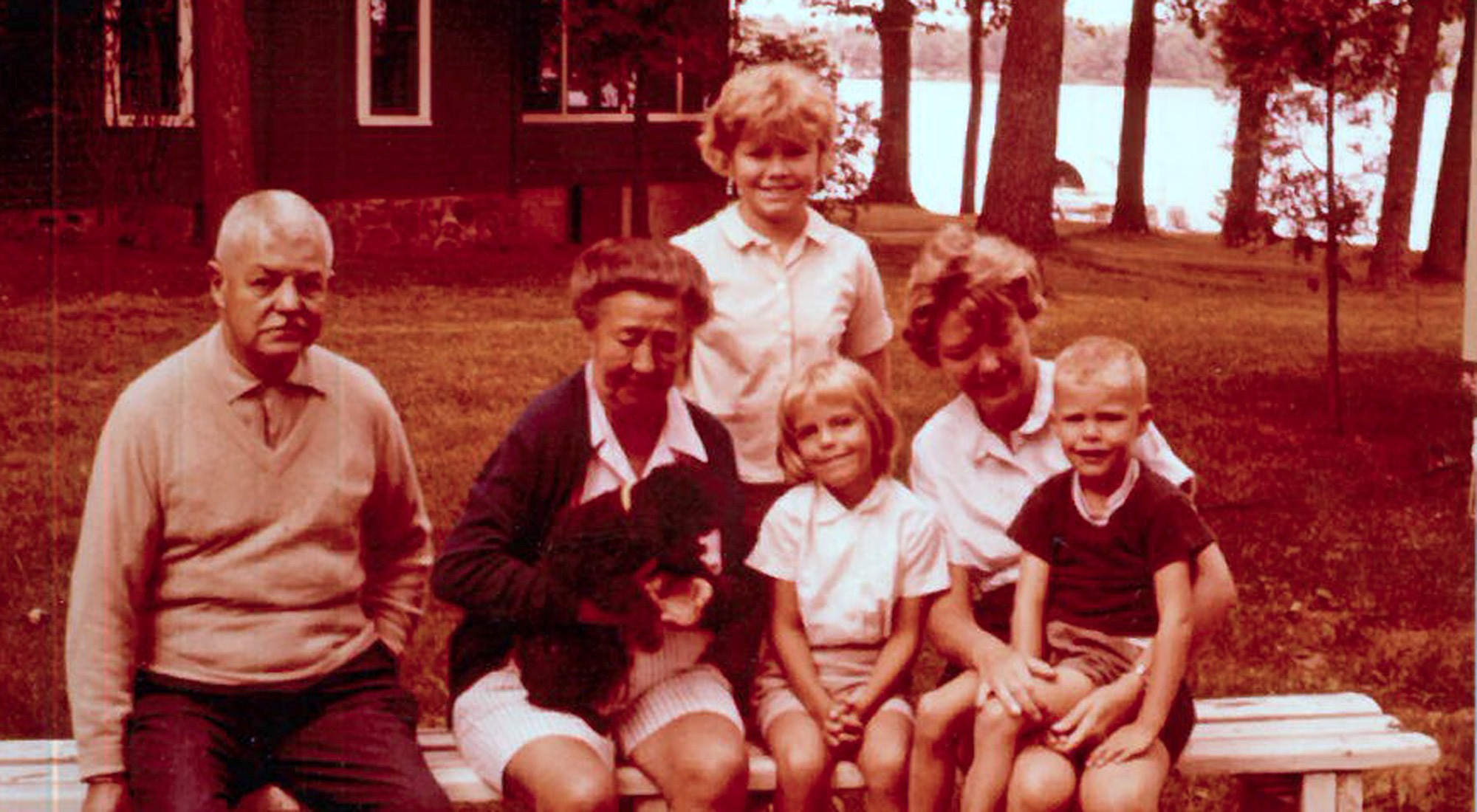 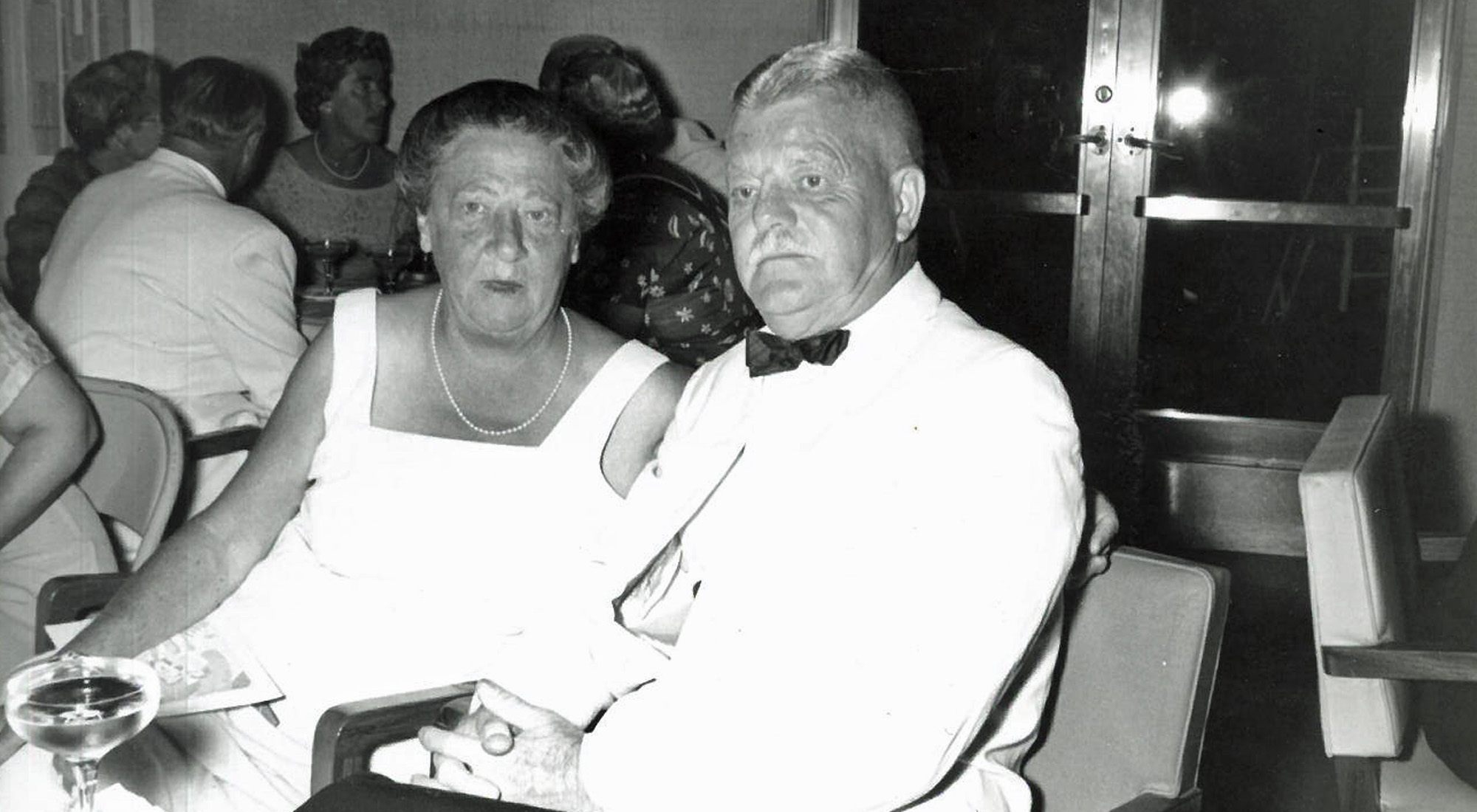