This article is a personal memory/tribute regarding Mr. and Mrs. Eagy, and by no means intended to fully cover the vast impact of goodwill and good works that the Eagy’s had on Clark Lake.

At  the age of seventy-five, I have a hard time remembering the many phone numbers, user names and passwords that are necessary to navigate my way through each day.  However, there is one number that has remained in my mind from the time that I was about ten years of age: 9158.   That number, later expanded to become Lakeside 9-9158, was the phone number of the late George and Myrtle Eagy of Pleasant View Drive, Clark Lake, Michigan.   Mr. Eagy, who was known to all as “Bowser” and his wife, Myrtle, were fixtures at the Lake for many decades, and I was lucky enough to have been among those who knew and respected them.  Bowser and Myrt were legendary at the Lake for their outgoing and welcoming personalities, for their boundless energy, for their kindness and generosity, and for their knowledge of, love for and promotion of everything Clark Lake. Bowser and Myrt knew Clark Lake, its people, its cottages, and its traditions.  They shared their enthusiasm for the Lake with countless folks that they encountered.  Bowser and Myrt made their cozy Clark Lake Pleasant View Drive cottage, and the large adjacent garage, places where everyone was welcome.   Since we never had a phone at our cottage, as a child, high school and college student transiting seasonally and on unpredictable occasions between Toledo and Clark Lake, 9158 was a phone number that  I could call to leave messages for my parents, for airport pick-ups and for many other kindnesses. 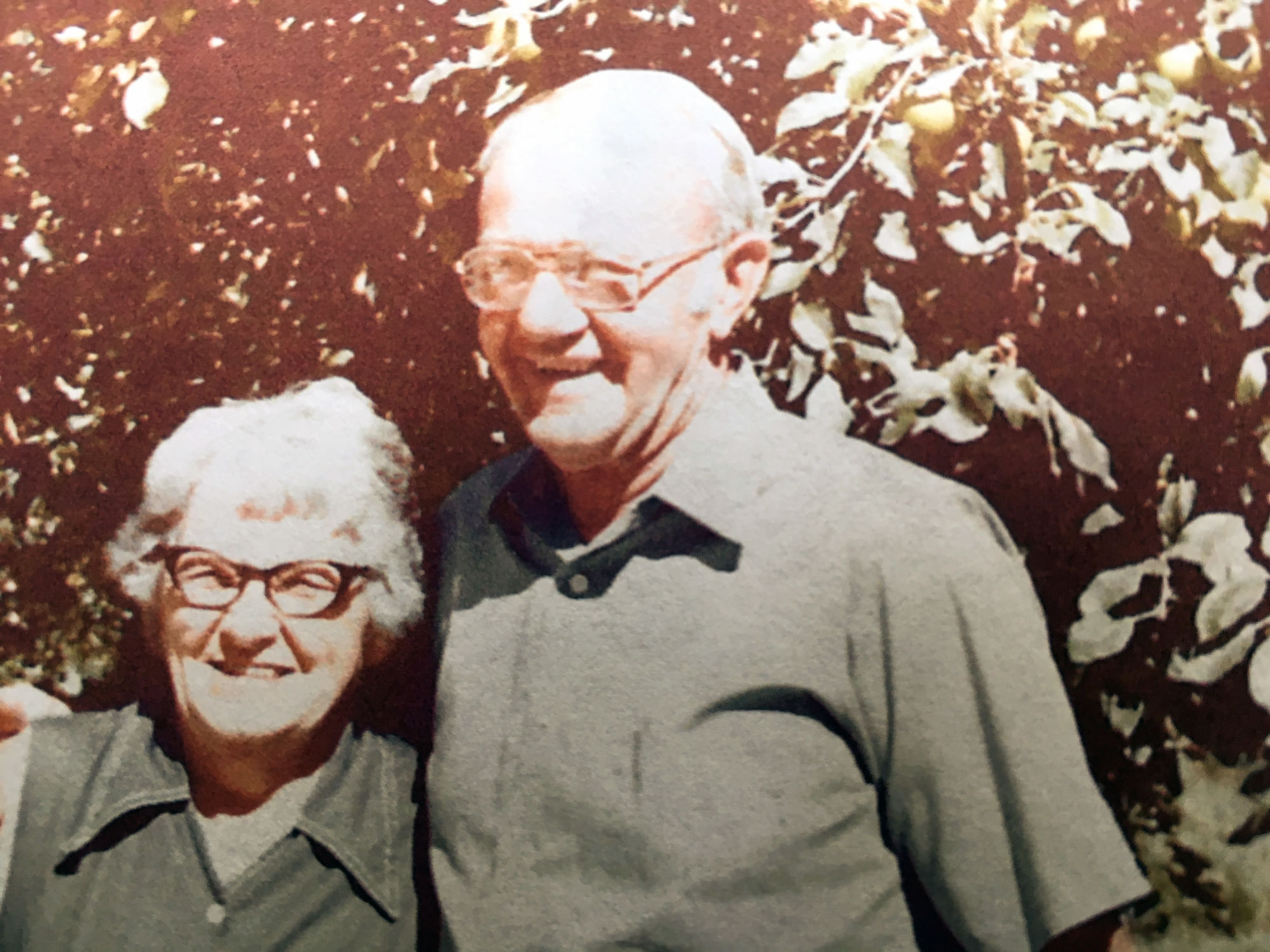 For years Bowser was known to many as the “Unofficial Mayor of Clark Lake.”  He and  Myrt were the constant ambassadors of the Lake.   I remember so well  as a grade school youngster reading the framed article from a very early 1900’s Jackson Citizen Patriot , that hung in the living room of the Eagy cottage.   The headlines of that article extolled “Beautiful Clark Lake and its Resorters.”   From the first time I saw that article hanging in the Eagy living room, I knew that Clark Lake was a very special place, and that Bowser and Myrt had an unwavering love for the Lake . Bowser  and Myrt proudly showed that article to their many visitors. New visitors to the Lake, who stayed too late talking and enjoying their first experience of Clark Lake’s summer life, were graciously offered a bed for the night in one of the Eagy cottage’s bedrooms, or on the enclosed porches on the first and second stories of the front of the cottage.  Many a child spent nights camping out on one of the bunks located in “Bowser’s Garage.”  Likewise, Bowser and Myrt were a consistently present and welcoming fixture for those who had known the Lake for many years and returned to the Lake summer after summer. 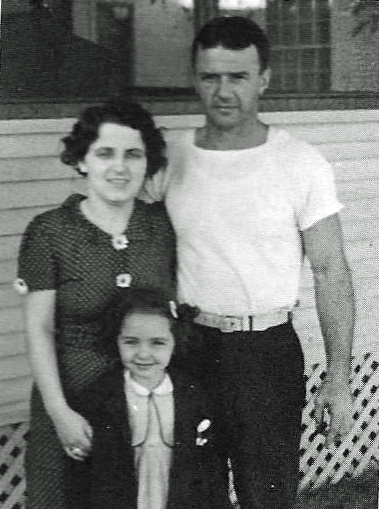 Who was Bowser?   First of all he was the devoted husband of Myrtle, the proud father of Glenna Mae, and the doting grandfather of Beth Ann.  Bowser was a devout Episcopalian and attended the early service at the beautiful All Saints Episcopal Church in Brooklyn every Sunday morning.

As a young man, Toledo, Ohio native George Eagy worked as a navigation pilot on the Lake Erie Steamer, Greyhound.  Being a captain was a talent thoroughly ingrained in George Eagy.   As one of the earliest owners of a pontoon boat on Clark Lake, Bowser named his raft, Greyhound II.  Having been custom constructed by himself in the late 1950’s, Bowser’s Greyhound II was a large, solid and distinguished  looking craft, and one of the first pontoon crafts that plied the waters of Clark Lake.  Bowser piloted the Greyhound II with the skill and care that he had learned on its much larger Lake Erie namesake.  Bowser was one of the original organizers of the Raft-O-Rama, which continues today as one of the highlights of the Clark Lake summer season.

Aside from his presence as an early Clark Lake rafter, everyone knew Bowser as a competent master plumber.  Before the era of copper, PVC or PEX, Bowser was an expert in the “old school” plumbing practices that involved the use of molten lead and oakum stuffing to seal cast iron drain pipes, threaded galvanized steel water pipes and other heavy duty hardware items.  A board in the laundry room of the Eagy cottage housed the keys for most of the cottages on the North Shore Pleasant View area.  Even after Bowser performed the annual spring “opening” or fall “closing” routines for those cottages, he was often called upon to trouble-shoot plumbing and other cottage problems.  As a plumber Bowser left his mark on numerous residential projects as well as on large industrial and institutional projects such as the dormitories at Siena Heights College in Adrian, Fields and Jacobson’s Department Stores and Consumers Power facilities in Jackson. 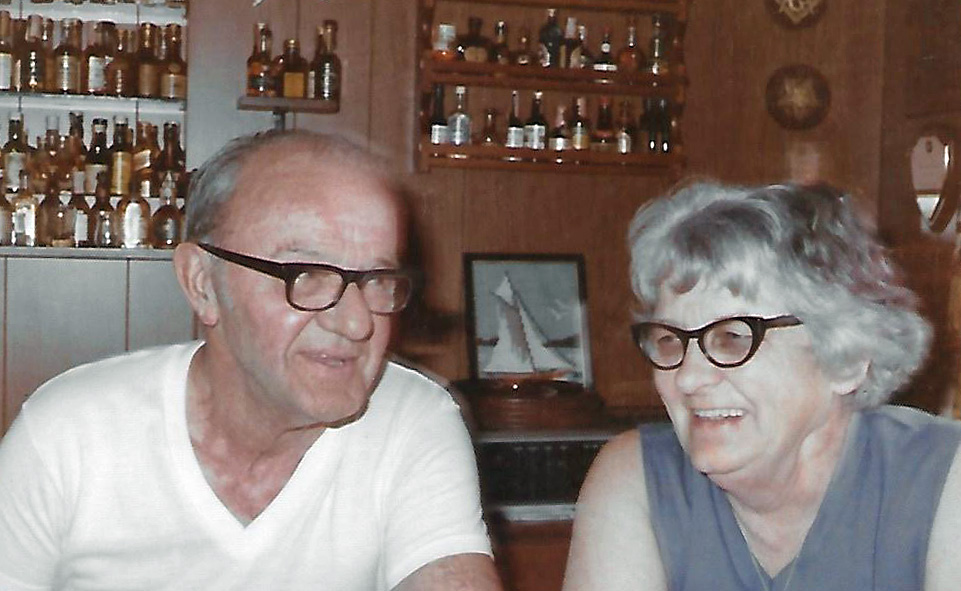 Bowser and Myrt’s cottage, which was never locked, was the ultimate in coziness.    The living room was decorated in a nautical motif, and appropriately, the  glass surface of the dining table covered a huge navigation map of Lake Erie.  In the 1950’s Bowser’s garage was as much of a Clark Lake institution as any of the Lake‘s hotels, pavilions or restaurants.    Bowser’s garage was a long flat roofed structure that was built in the very early 1950’s.   Bowser explained that the roof was designed to be flat because the structure was originally intended to have a second story living space added to it. The garage housed more tools and parts than were available in any of the hardware stores in Brooklyn.  It was also the original man cave.  At the rear of the garage was a full bar with a beer tap.   For years Bowser’s garage was a genuine Clark Lake gathering place.  Adjacent to the bar was an old round oak table, where games of Euchre or Hearts were regular features of summer weekends. The garage or the picnic tables and chairs outside the garage served as the original meeting place of the Pine Riders Water Ski Club.  The garage also provide winter storage place for sailboat masts and rigging.  Every year after Labor Day, my sailboat was taken out of the water, and the mast and rigging were stored overhead in the rafter’s of Bowser’s garage.

One example of the kindnesses that Bowser and Myrt conveyed took place in the summer of 1957.  With new ownership and management, the formerly staid Pleasant View Hotel had just been transformed into the updated and more hip Clark Lake Lodge. The Tap Room had been completely renovated, and for a few years both the hotel and the Tap Room became the weekend destination for hundreds of Clark Lake resorters and visitors.   For the summer of 1957 musician entertainers were hired for the entire summer season to perform several evenings each week in the Tap Room. Those entertainers, who appeared on stage in formal attire, stayed in an early version of a rock star’s motor coach that was parked on one of the vacant hotel lots adjacent to the Eagy cottage.  Bowser and Myrt generously connected the entertainers’ rolling home to their own electricity, water and septic systems. 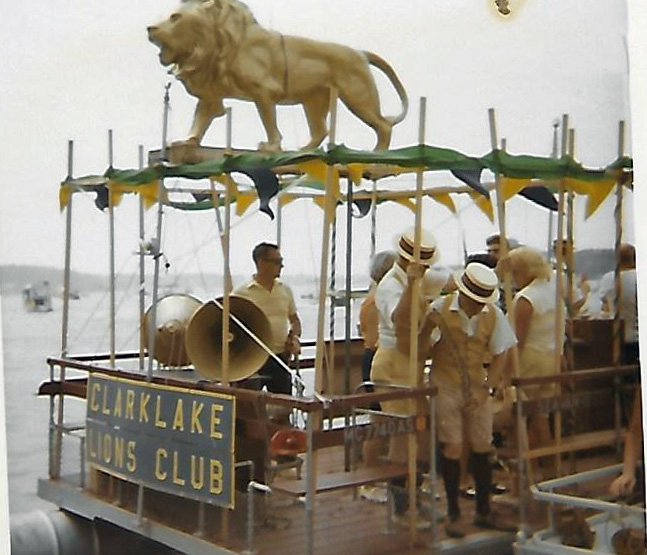 It was Bowser who initiated the annual Fourth of July boat count. Starting at daylight on the Fourth of July, Bowser and my father, Bob Ryan, drove the Greyhound II around the entire shoreline of the Lake tallying, rowboats, outboards, inboards, rafts and sailboats in the water. The boat count custom survives to this date.  An early organizer of the Clark Lake Lions Club, for many years Bowser volunteered to deliver gum balls to all stores and dispensing machines in stores, restaurants and gas stations in the Clark Lake area.

Another vivid memory of the kindness of the Eagy’s  centers around a 1950  Nash Rambler convertible that Mrs. Eagy had in approximately 1960.  I was 16 and had a new driver’s license.  Most weeks during the summer I  stayed at the lake, and my parents came to our cottage only on weekends.  I fondly remember that little dark maroon Rambler, with its canvas top that had to be rolled back manually.  Myrt allowed me to drive that car for evening trips with my Lake friends to the Star Theater in Brooklyn or to the Jefferson Road Tastee Freeze.  One time we drove to the Star in Brooklyn, and I inadvertently left the car’s headlights on while attending the movie.  When we emerged from the movie, of course, the battery was dead, and the car would not start.  We pushed that little stick shift Rambler down the hill behind the Star, and it easily jump started.  However, I forgot to turn the lights on as we headed back to Clark Lake.  We were promptly stopped by the Brooklyn Police, and  fortunately were given only a friendly warning.  How kind of Myrt to allow a sixteen year old to use her car, and to provide me with many early driving memories. 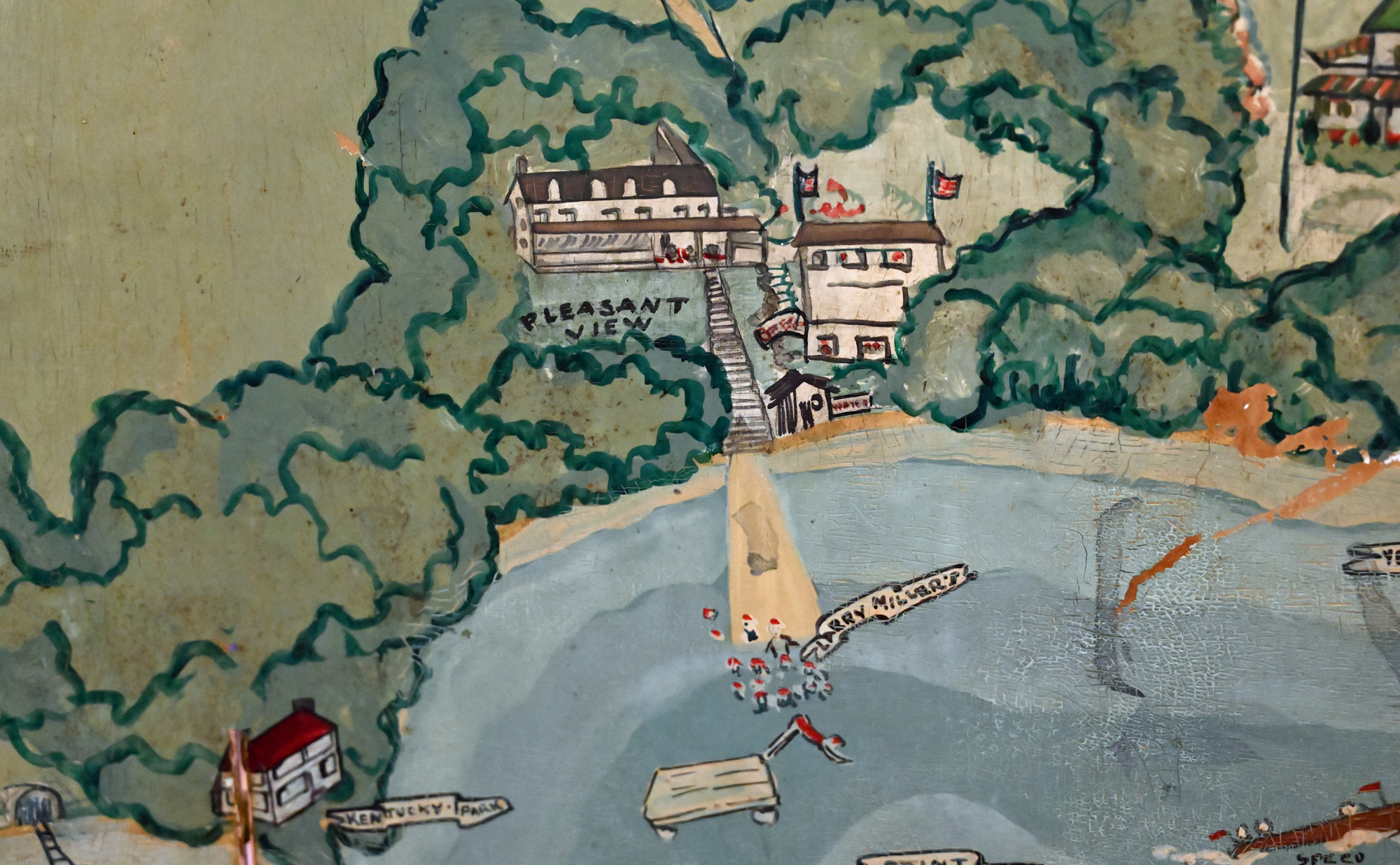 Another memory of the kindness of Mr. and Mrs. Eagy centered around my father’s annual early December trip to the Lake to pick up a load of Avis Apples that he distributed to business associates as holiday presents. Every year, after the beautiful gift boxes of those magnificent MacIntosh apples were loaded into a station wagon at the huge red Avis barn, Myrt served a bean soup lunch.  Every year my father looked forward to that trip and to Myrt’s bean soup lunch.  Myrt was a great cook, and could tell when a visitor was hungry.  On summer weekends something was always on the stove in Myrt’s cozy galley style kitchen. 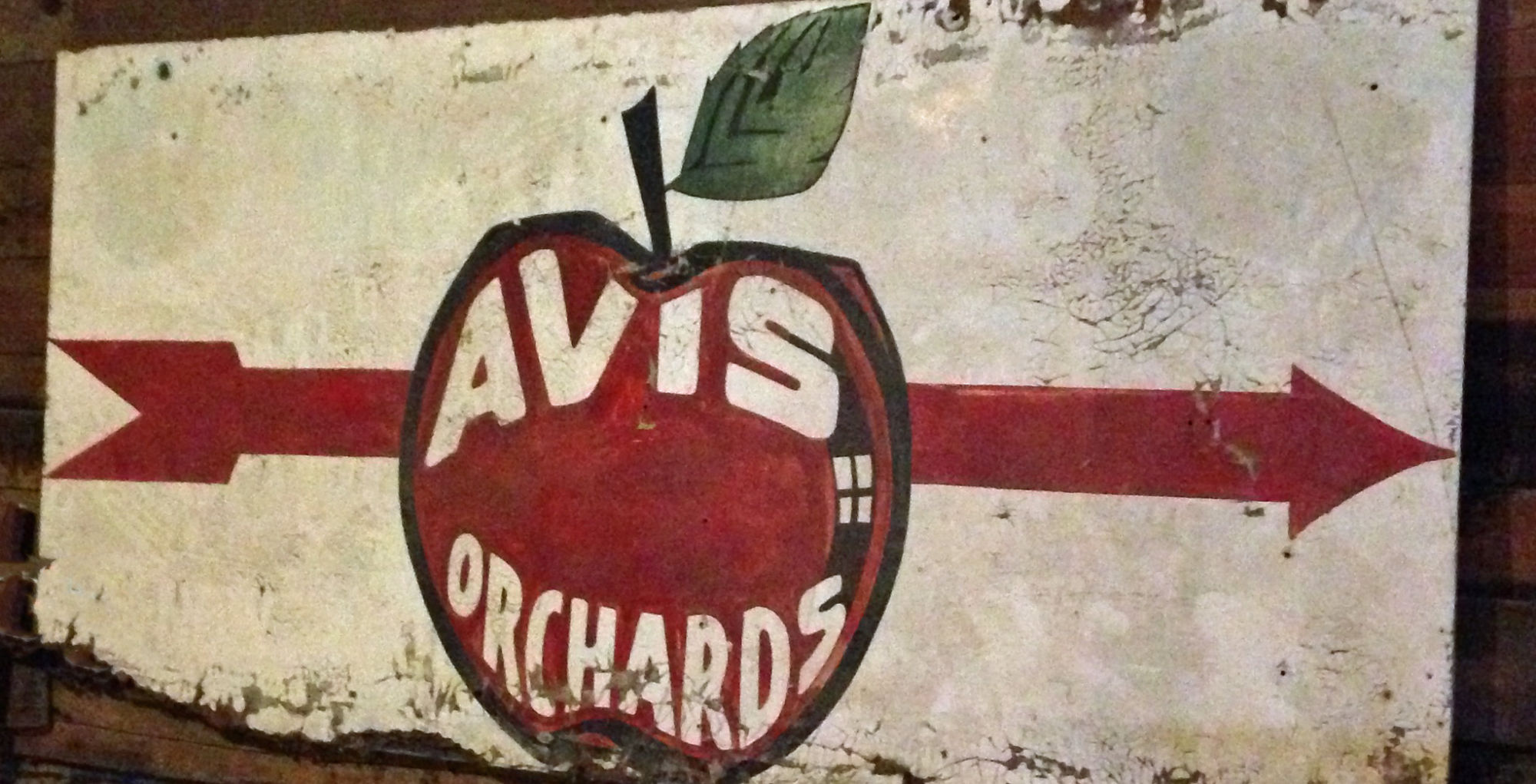 I also remember imposing on the hospitality of the Eagy’s, when as a high school student I was invited by some summer lake friends to a post-Christmas ice skating party of the Hungerford cottage which was located in the Kentucky Park area, a few doors west of the former St. Rita Chapel.  I recall so fondly and vividly the cold stillness of the Lake and only occasional lights along the shoreline.  What number was it that I called to arrange a place to stay the night after that party?—Lakeside 9-9158.

The Eagy’s home is no longer a part of the Pleasant View Drive streetscape.   The garage was razed in the late 1980’s, and the cottage was razed in 2017.  I am so glad that I have so many fond memories of Bowser and Myrt. 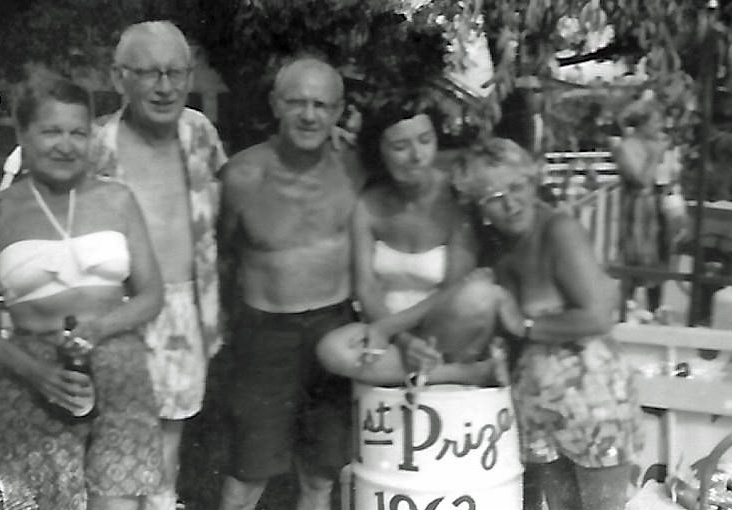 The author, Larry Ryan, has written two other retrospectives on life at Clark Lake.  One centers on growing up in the Pleasant View area, and the story also tells of the relationship with the Eagy’s.  The second story takes you to the days when St. Rita’s Catholic Church was located at Clark Lake.

Thanks to Linda Reynolds–some of the photos were digitized from her collection.