Ever Fly a Bomber over Clark Lake?

I turned my head to see who had tapped me on the shoulder. “Would you or Bob like a ride in that B-17 parked outside the Richmond Brothers hangar?” It was my old friend and fellow pilot who had orchestrated landing a restored B-17 bomber on the new runway at Jackson County Airport. The event was to celebrate Kent Maurer’s retirement after 18 years as airport manager. Bob and I were seated in an audience of 300 listening to speeches that yawned on and on from the Federal, State and County officials who had funded the construction of the new runway. 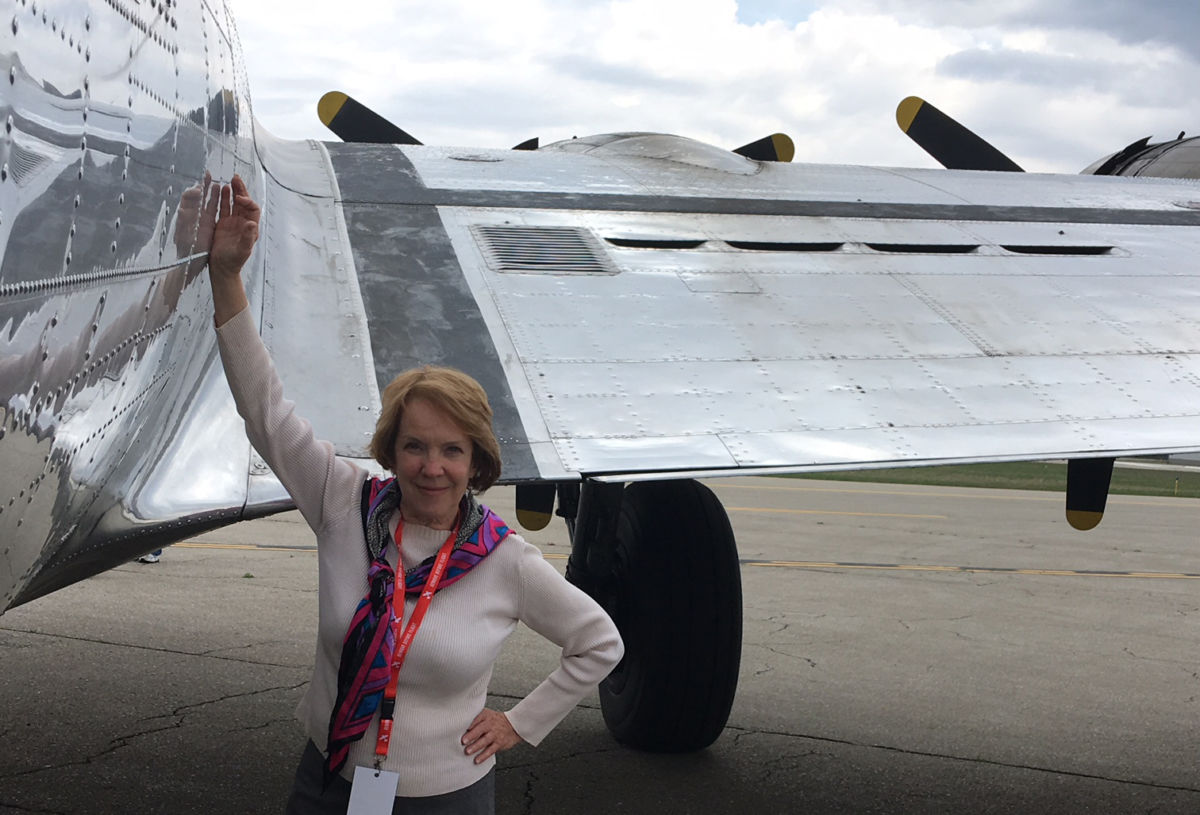 “What fun! Sure.” In no time I was standing in line on the tarmac amazed at my luck to get a 35-minute ride on this 73-year-old warplane. The Yankee Lady is one of only 10 Flying Fortresses that remain airworthy of the 12,731 built by Boeing between 1936 and 1945.

“I have a place for two passengers in the bombardier’s nose cone,” the attendant in charge said. Two millennials standing in front of me took them.

An old-timer was next in line. “Where would you like to sit,” the attendant asked. “I’d like to fly the old girl.” It occurred to me this man was the age of my brother-in-law Jack LaZebnik who flew B-24s out of Italy in WWII.  This old guy was the right age to have flown a B-17, perhaps this plane, the Yankee Lady. The attendant laughed. “You can have the radioman’s seat,” and the old man crawled up the ladder and disappeared inside the fuselage. 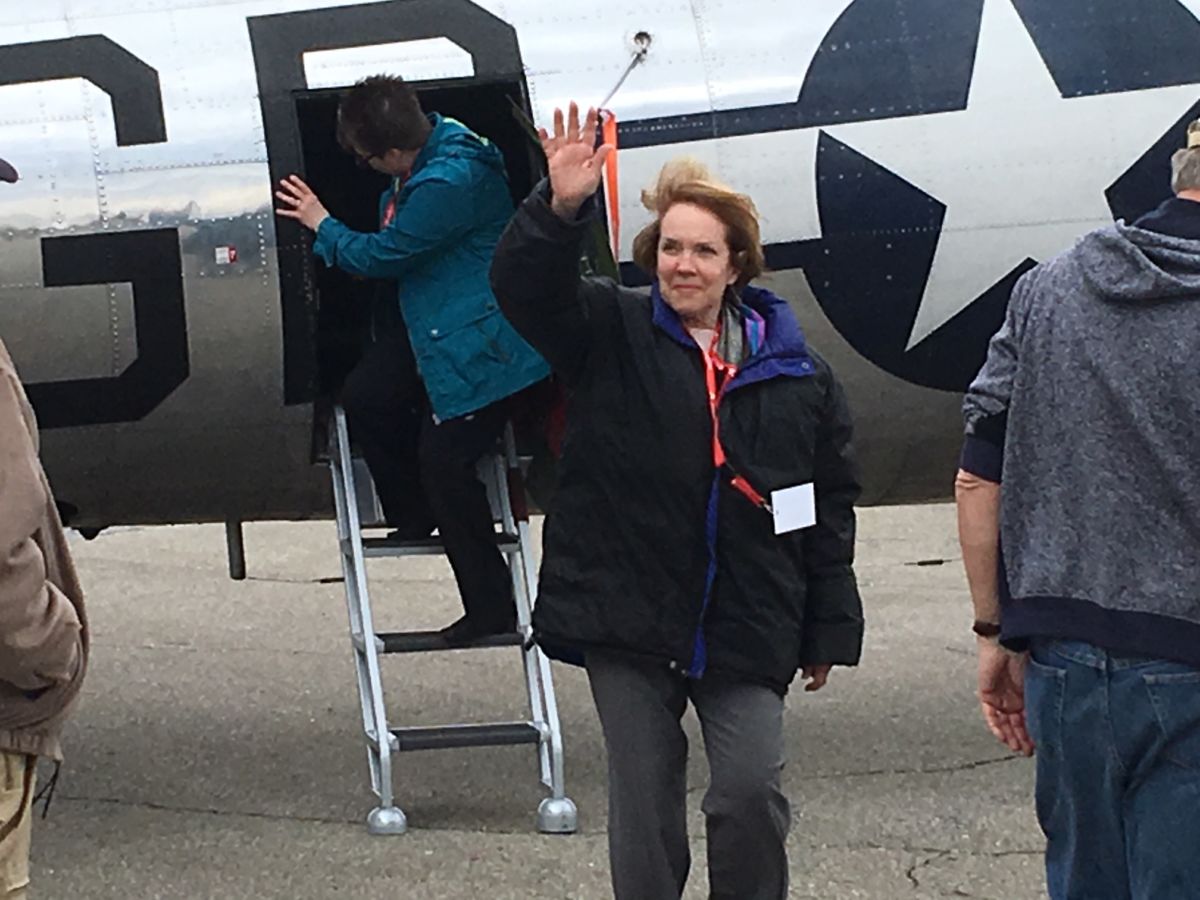 “Next. I have one place available behind the co-pilot.” I raised my hand, and the attendant pointed toward the removable ladder. As I climbed aboard Jack’s stories of WWII bombing raids over Europe ran through my mind: the artillery shrapnel that came through the thin cockpit wall of his B-24 and was deflected by his helmet; the forced landing in Yugoslavia on empty fuel tanks when his crew were greeted by patricians instead of the Nazi occupiers. Flying wartime planes took courage. Cowardice was never an option.

The fuselage on this B-17 was a dark narrow tube, high enough for a man to stand and wide enough for the 10-man crew to operate the 12 Browning M2 machine guns in the nose, the tail and on each side of the plane. Belt-fed ammunition was still attached to these guns capable of 750 rounds a minute. This was a killing machine compared to the single engine plane I learned to fly on sunny summer days at Jackson’s airport. The B-17 carried a maximum bombload of 10,000 pounds and was reported to have dropped more bombs than any other WWII aircraft.  Flanked by Allied fighter plane escorts, more B-17s made it back to base than any other WWII bomber despite extensive battle damage.

I wondered how many airman’s bodies had been carried back to base full of shrapnel that had not been deflected by helmets. War takes a terrible toll, on both sides.

WWII was over before my husband was old enough to join. He went to art school instead. Jack came back after the war, rented a plane and took his kid brother up to show off.  The survivor of 23 bombing raids flew barrel rolls, spins, and figure eights over the skies of Jackson. He did a nose dive over a playground to watch the children scatter.  The inappropriate joy ride was over when the tower ordered him down and he had to face his father, an immigrant and son of a family who barely escaped the Holocaust. 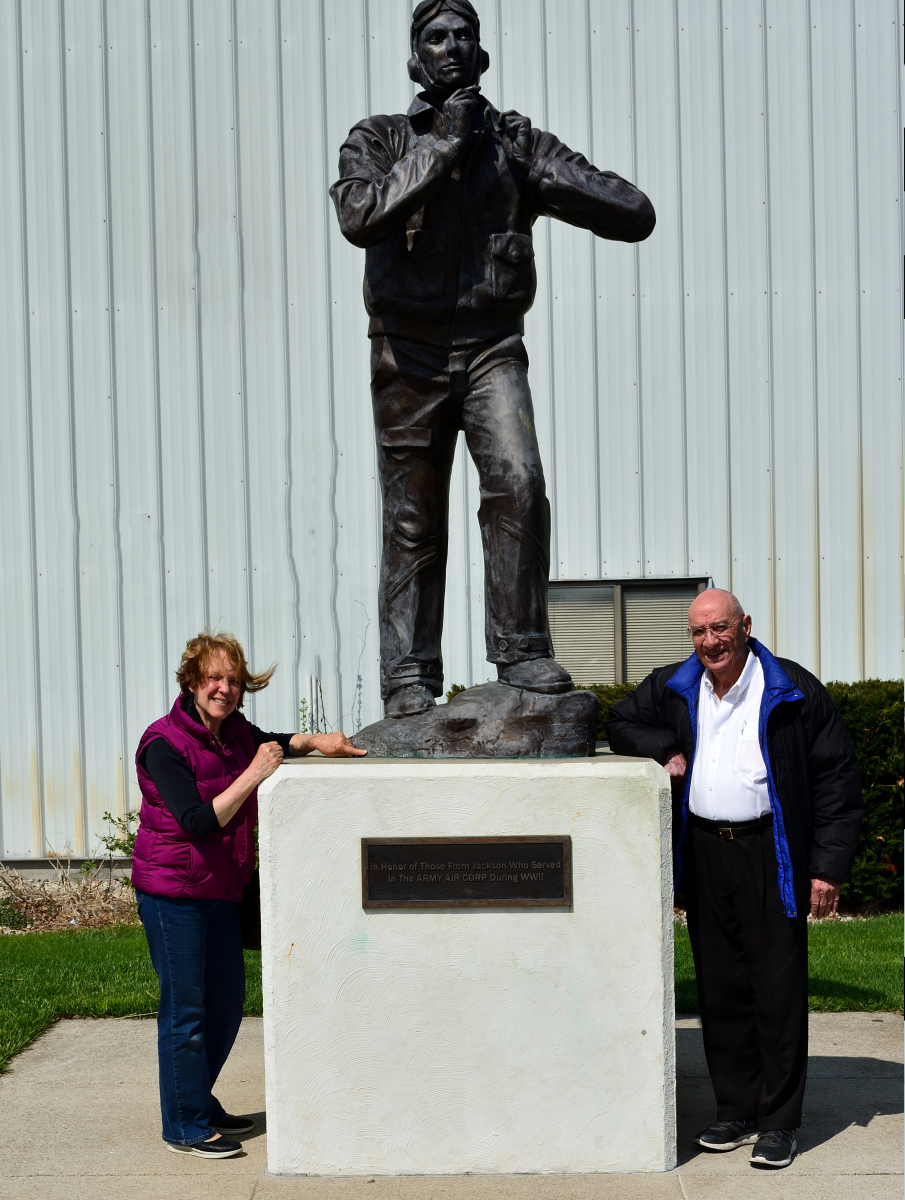 Bob’s fascination with aviation and art eventually melded and he commissioned three sculptures for our airport’s Aviation Heritage Park–a bronze sculpture of an airman that looks suspiciously like his brother, a Fokker tri-wing like the Red Baron flew in WWI, and an Ornithopter, one of the first flying machines designed by Leonardo de Vinci in 1505.

I passed the radio operator’s seat where the old man was fastening his seat belt and crawled through a tunnel onto a narrow plank that separated the bomb bays, eerily open to the ground below. I found my seat, formerly that of the flight navigator. Over my seat was a plastic dome with a machine gun mount, but no gun. This Flying Fortress had a reputation for being tough, the crew for being patient and slim. The wartime flight crew had no bathroom or in-flight food service.

I told the pilot if either he or the co-pilot ran into trouble, I was right here behind them ready to help. “I am a licensed pilot.” The co-pilot turned in his seat, looked down and asked what I flew. I told him a Cherokee 150, low wing, single engine and was licensed for VFR flying only. I added that I hadn’t flown in years but was sure it would come back to me, like riding a bike. The pilot turned in his seat and said, “If we get down to one engine, you can come up here and take over.”

Prior to takeoff we were encouraged to tour the plane. I crawled through a tight tunnel under the cockpit to sit in the bombardier’s plastic bubble. This airman’s station hung off the bottom of the nose with a full view of the ground below his chair, an easy target for an enemy gunner. The bombardier had access to machine guns on both sides and a bomb sighting device in front. I crawled back to the navigator’s seat and watched out the side windows as the four engines began to whirl, smoke and then rattle. Each of the noisy engines burned 50-gallons an hour.

The captain signaled. It was time to sit down. The pilot perched in the cockpit above looked back at me from where he was strapped in and smiled. “I’m not going to come down there to help you fasten that seat belt.” I told him thanks but I could figure it out myself, and I did. As we taxied down the runway I watched white lines on the tarmac flash by until the bomb bay doors closed and we were airborne.

We cruised at 182 mph from 200 to 2000 feet off the ground.  It seemed dangerous for an aircraft to fly that slow, an easy target for enemy fighters. I learned that for safety the B-17 squadron flew in combat box formation at altitudes topping 35,000 feet with gunners at every post. The Luftwaffe learned if they picked off a couple B-17s on the formation’s edge the entire group would become vulnerable. When Messerschmitt’s flew straight at the nosecone of a B-17 and killed the pilot the Allies were short one more long-range bomber.

The flight took us south over Jackson College, and then east until Clark Lake came into view. I tapped the pilot on the shoulder and told him I lived down there. He said, “I’m happy we’re able to give you a look at your house.” We were too high to see anyone looking up and happily waving hello. I thought of how intimidating this warplane would be as it flew over Europe. 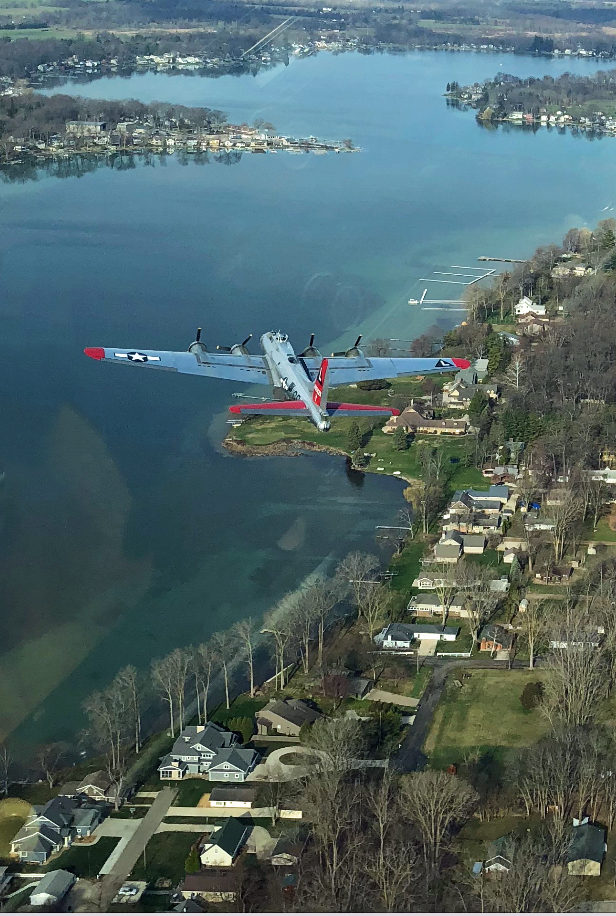 Pilot Tony Hurst and Karen Barnes followed the B-17’s flight and took this photo as it passed over Clark Lake. Thanks to John and Elaine Stewart who made it available for this story. 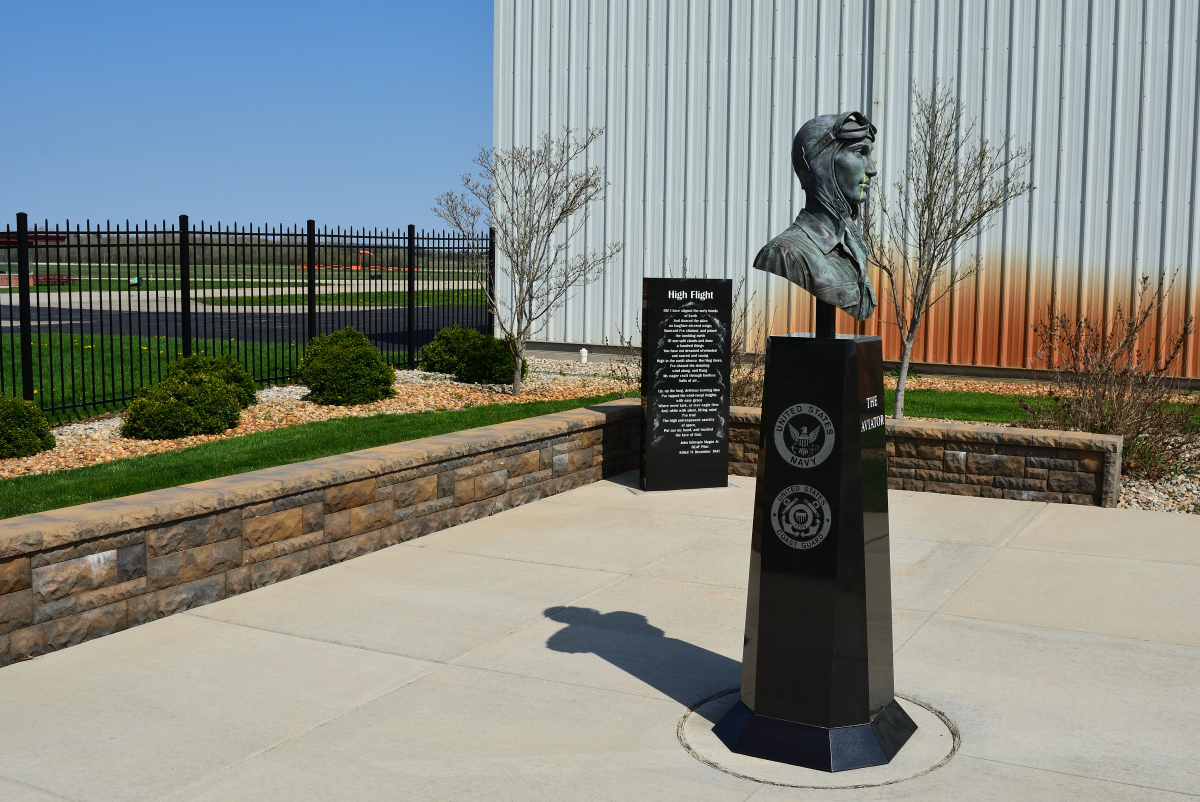