As someone who writes regularly about Clark Lake, I was asked by the Irish Hills Chamber of Commerce to tell about the lake in a publication called the Resorter.  The Resorter was included in a recent issue of the Exponent, and is available now as a handout at various locations in our area.  The Chamber wanted the article to speak both those who are familiar with the lake and those who know little or nothing about it.  A challenge.  I thought you might be interested in how it turned out.

It’s true.  A visit to Clark Lake can be life-changing.  Not for everybody, nor every time, but often enough.

Benjamin and Eliza Graziani were heartbroken. They watched helplessly as their infant daughter lay on a pillow, struggling. A year earlier in 1896, they had escaped the oppressive summer heat of Covington, Kentucky, and this had helped the health of Carlotta’s older sister, Elsie. On the advice of a friend, they had discovered a “newly found paradise”. When Benjamin first arrived at Clark Lake, he sniffed the air and said “we have found the spot.” Sure enough, when the family returned to the lake, with Carlotta, her condition improved markedly. Her sisters thrived as well. Mother Eliza exclaimed “I do believe this lake has magic wind.”  So began the story of Kentucky Point, so-named for where Benjamin built a cottage for his family. Is that 122-year old cottage still at the lake? Stay tuned.

At one time Clark Lake was rural/agricultural—the lake served as a good place to water your cows. The Cincinnati Northern Railroad transformed Clark Lake into a recreational destination. And on April 11, 1922, my own great-grandparents bought into the trend by acquiring a cottage on the Eagle Point shoreline. Great-grandpa William Preece was a Toledo businessman, with an entrepreneurial streak. Seeing opportunity, he bought several more cottages and turned them into weekly rentals. When his grandkids (including my mom) were old enough, they helped maintain them—the girls, inside; the boys, outside. Their reward was escaping the heat of Toledo and cooling off at the lake all summer long. Today I live next door to the original family cottage, still owned by my cousins. My home was built after fire destroyed the one-time rental cottage decades ago. Other Preece descendants, now in the 6th generation, live at the lake. My cousin, Ted Ligibel, wrote a book about the lake’s history–Clark Lake, Images of a Michigan Tradition.  Clark Lake’s hold on families doesn’t stop with Preece’s. Check out the My Clark Lake Story section of this website to discover how deep and wide it goes. 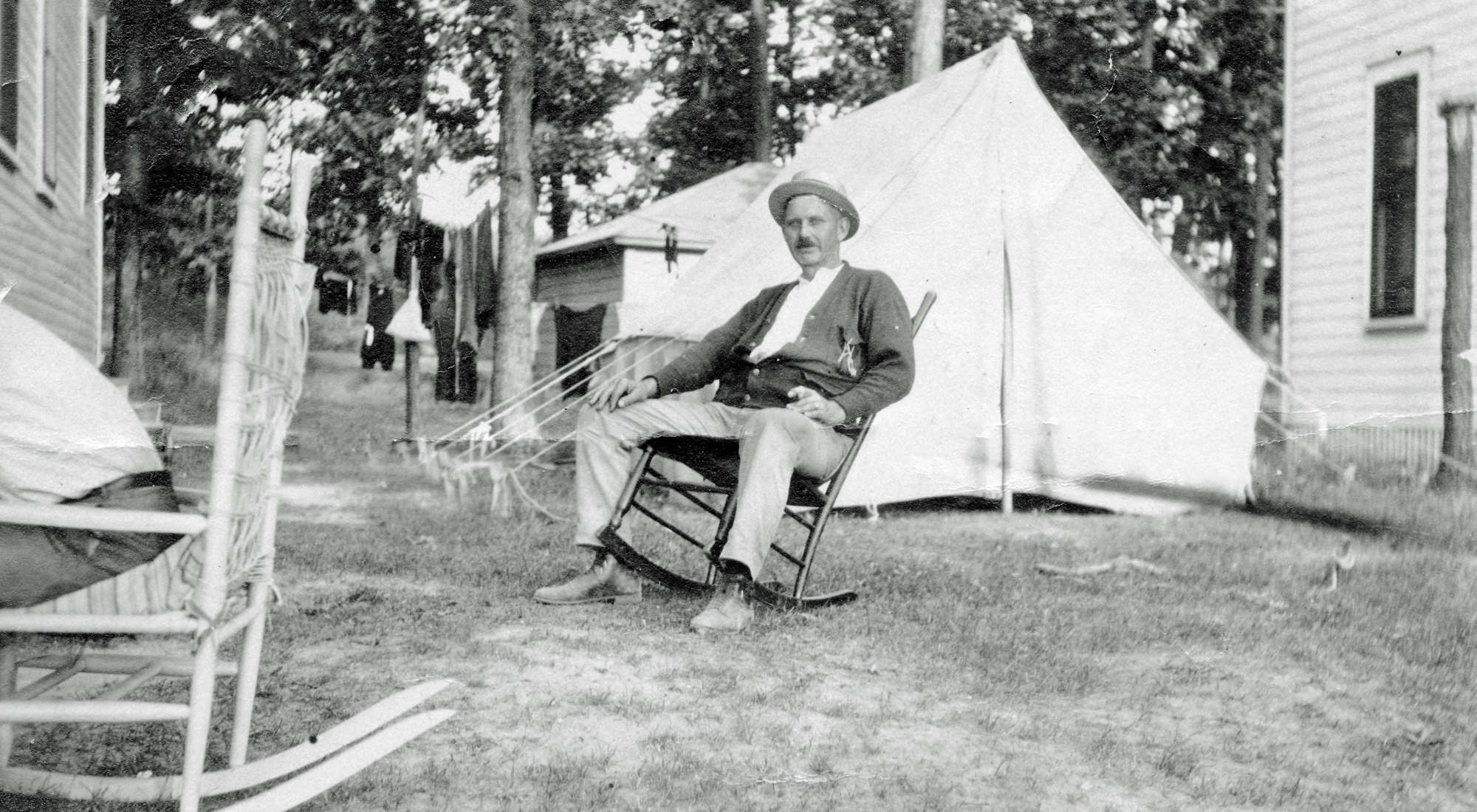 Above, William Preece relaxes between the two cottages.  Fast forward to now for the same scene, below. 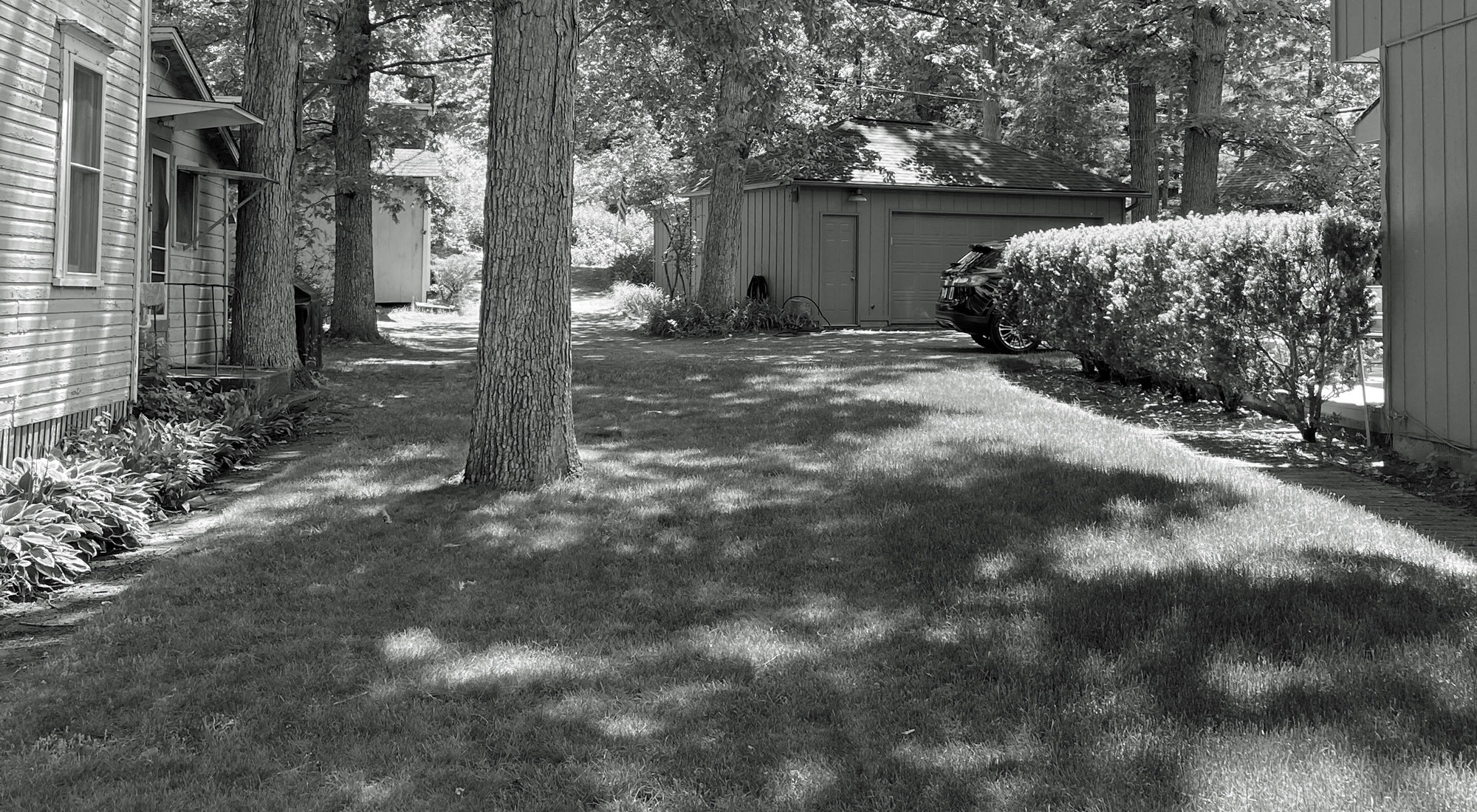 For sale signs are rare at Clark Lake. When they happen, the door opens to newcomers. Take the story of Kevin and Lucia Thomson. Kevin is a well-known Jackson attorney. In the 1990s he purchased a summer cottage for his family and continued to live in Jackson during the winter. But, the lake changed their life. Four years ago, he and Lucia sold their Jackson house, and bought a larger home at the lake. And there’s more. Their son, Daniel, recently married. He and Jamie live next door to Dad and Mom in Clark Lake’s South Woodlands. And, Jamie’s parents, Kirk and Marty Mercer are building a new home in the lake’s Pleasant View section.

Charming original cottages stand next to beautiful new homes created by builders like Mike McKay, who also lives at Clark Lake. What is it that motivates people to spend summers at the lake or to make it their year around residence? It’s more than the spring-fed waters, boating, and natural encounters. The lake serves up a large-sized helping of magic called the Clark Lake Spirit. This unique sense of community permeates the shorelines. Out of it grows projects and events that are rare elsewhere. 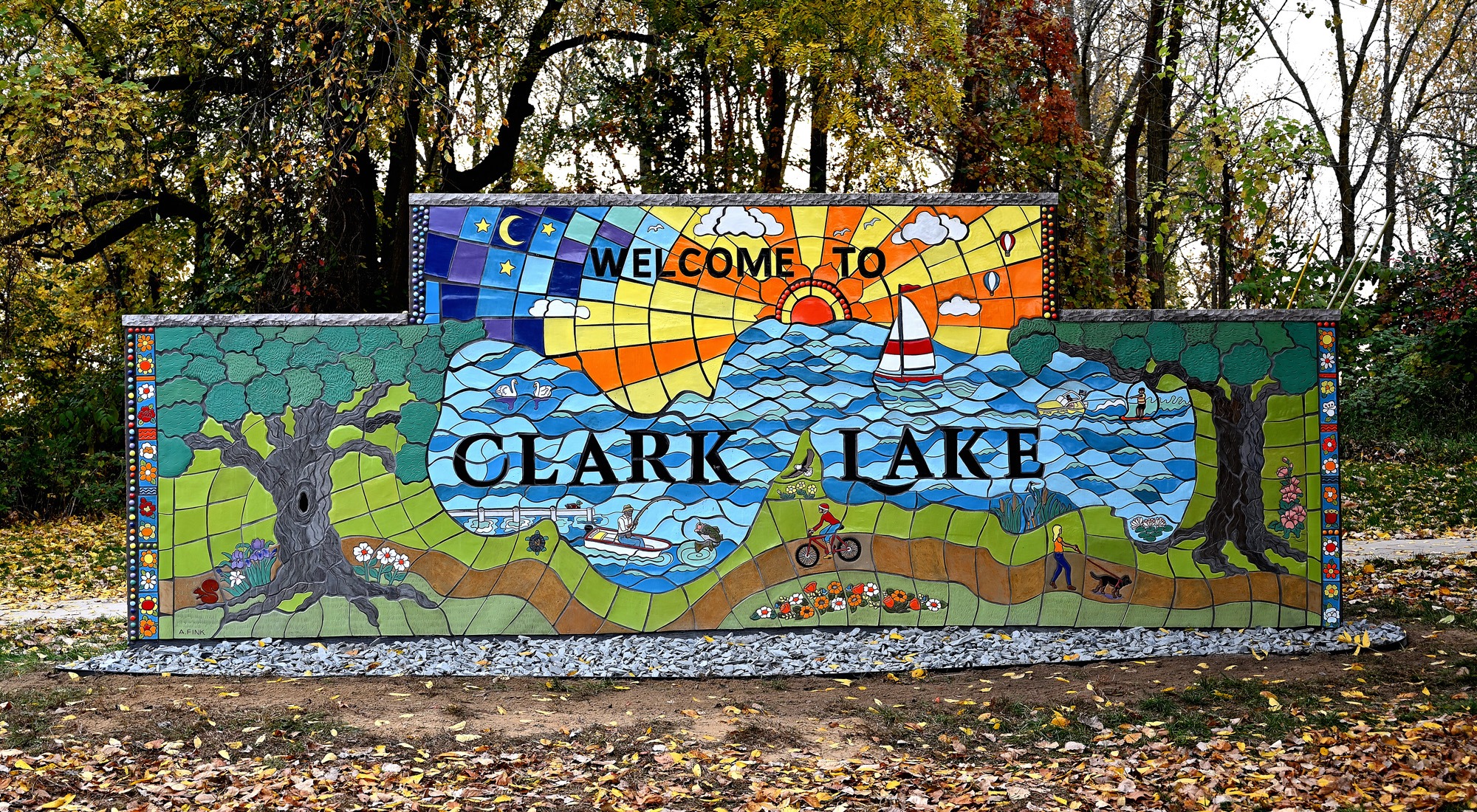 The late Tom Collins, owner of the Beach Bar, inspired one of those projects. In 1996, he said “If common cause is needed as a focal point around which to rally, let us build a PATH…let the creation of a safe, off-road, hard surfaced multi-purpose trail for walking, running, biking, skating, etc., be the vision of the future.” And the community did rally. Today the 7.3-mile Clark Lake Spirit Trail circles the lake. Like other lake endeavors, Clark Lake volunteers maintain and improve it.

At the very same time the Spirit Trail project was underway, the historic Graziani cottage on Kentucky Point was about to be razed. The Clark Lake Spirit came to the rescue to preserve this part of its heritage.

Moving the house to a new location would require cutting down trees and dodging power lines. Engineering genius came into play, and on a day in June 1996, the house floated down the lake on a barge to the County Park. Now, this connection to the past serves as the Community Center. From high on a hill, it stands guard in the County Park, as it did for 100 years on Kentucky Point.

Events play a strong role in the Clark Lake Spirit. Put on by volunteer residents, all are invited to enjoy Raft-O-Rama. If you’re hazy on Raft-O-Rama, here’s some clarity. This summer is its 60th anniversary. Teams, with a passion to win, will decorate their rafts in this year’s theme, the 1960s.

Other annual events include the Crab Races and Run Clark Lake. Up to a thousand participants from all over the country participate in the run. Competitors take full advantage of the Spirit Trail, including the route through the canopied Magic Forest. Late in September, the Clark Lake Yacht Club holds the Fall Regatta, beckoning crews to bring their sailboats to Clark Lake to test their skills against the wind. For all these events, the good-natured desire to win is strong. And sparkling hardware is awarded to the champs.

Not to give you a chill, but winter also happens at Clark Lake. The Polar Plunge embraces the cold.

The events offer fun, and a way to enjoy the lake, all under the wingspread of the Clark Lake Spirit. Is a visit to Clark Lake life-changing? To some, for sure. And they wouldn’t have it any other way.

Note: To those who visit Clark Lake with their boats, please consider carefully washing both the boat and trailer before putting it into the lake. Invasive species from infected lakes can enter the water this way. Clark Lake launched a major effort to defend the lake from crazy weeds–and ask others to support it.