A Slice of Paradise at Clark Lake

It happens in different ways for different people.  But there is one unifying factor, and that is a love for Clark Lake.  Here’s a story about one of the ways Clark Lake became paradise in a way that speaks to four guys you may know. 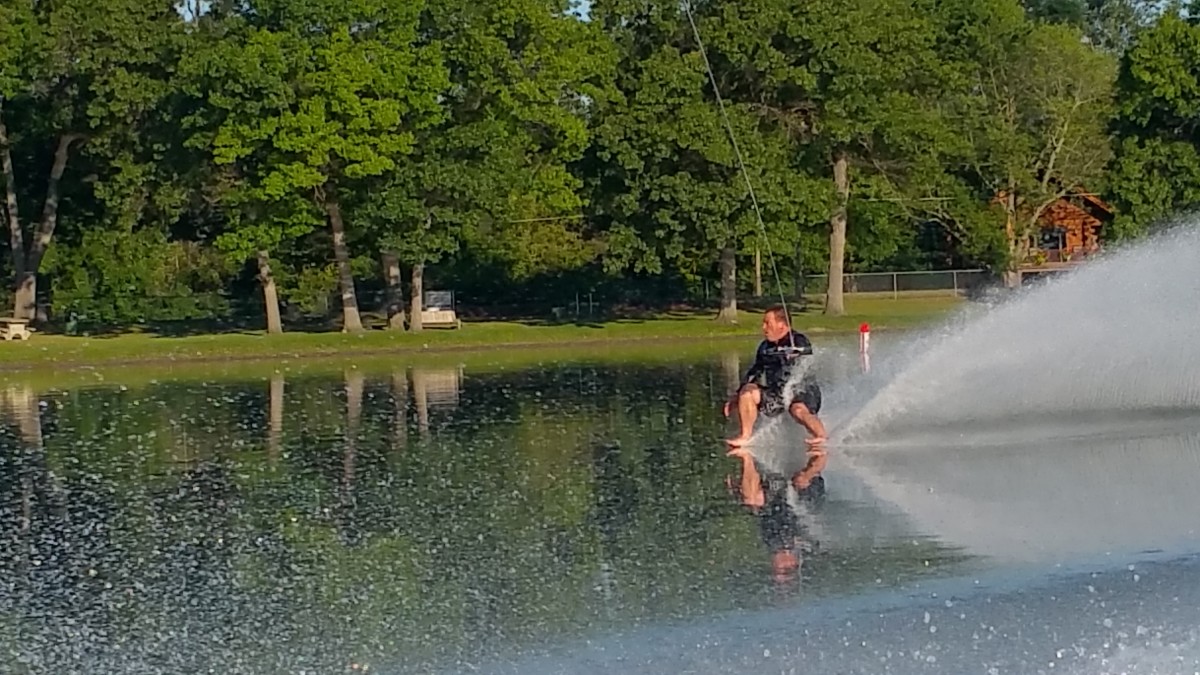 Clark Lake has produced some remarkable water skiiers–Lynn Vermeulen, Lynn’s sisters Linda and Kay, Gary and Tony Krupa, Buzz Belcher, Charlie Timberlake, Jon Broderick, Phil Curtis and several others.  Water skiing’s storied past at Clark Lake reaches even further back.  In her “My Clark Lake Story”, Dr. Mary Bentley writes that in 1928 there was only “one power boat [and it] belonged to Doc McKee, and he was the first one to introduce water skiing.” From there skiing had a firm footing.

Over the years, the sport grew and is still alive today.  No more slalom course or ski jump, but there are those taking barefooting to a new level.  They ask “why use skies when you really don’t need them?”

(To view photos, click on the first one.  Then place your mouse over the right side until an arrow appears. Click on it to move to the next photo) 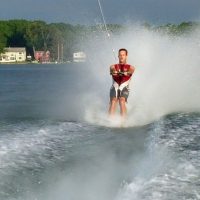 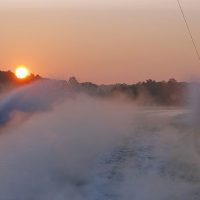 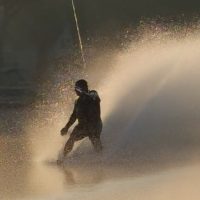 The story of Pat Felgner’s family at Clark Lake began in 1939 in the Ocean Beach Road area.  Today Pat is 42, but learned to ski early.  His proficiency kicked up a notch when he first dropped the skis and went barefoot behind an inboard/outboard when he was 13.

Clark Lake isn’t all that big, and as his interest in barefooting grew over the years, he connected with three others who also love the sport–Ryan Thayer, Jason Kadlec, and Britt Phenicie who range in age from late 30’s to late 40’s.   Barefooting, particularly for those who weigh 200 pounds, requires a fast boat.  Pat Felgner’s Barefoot Nautique with a 454 Chevy engine can put out 50 mph, though 42 will usually do.  And with a boat with that much power, they can double up–two barefooters at a time.  After all, the price of gas may be down this summer, but anyone who has an inboard knows these boat can be gasoholics.

Pat says the best barefoot conditions are found around dawn when the surface of Clark Lake is as smooth as glass.  At the end of a 100 foot ski line, you might expect them to start off on a slalom.  But no, they start with only their feet and stay that way for the duration.  How far do they ski?  “We really don’t keep track,” says Pat.  But the group plans to participate in the Buckethead.  This is a 39 mile endurance race on the Maumee River. It’s a relay race with a course of 19 miles each way.

What’s the attraction and how does it feel?  Comments Pat “It’s a rush! Heart pumping and relaxing both at the same time.”  If the lake is not glass they still ski, but it does changes things. “Sometimes it’s tingly to your feet and feels like a sharp knife slowly pulled across your arch.”  What to do? “That’s when you learn to move your feet around.  When the lake is glass you can lay your feet flatter and stand straighter up on the water. When it’s rougher, your ankles are flexed a bit– more toes up and knees bent–a bit more defensive.”  Pat defines perfect conditions “it is a ripple that dances on the bottom of your feet, enough that you can stand up but not worry about catching a toe.  You must be careful not to relax too much or the next thing you’ll be bouncing off the water.”

Clark Lake means different things to different people.  But the common thread is that you become one with our slice of paradise–whether through a spectacular sunset, kayaking, swimming, decorating a raft, hammock time or barefooting like Pat Felgner, Ryan Thayer, Jason Kadlec and Britt Phenicie.

Below, a barefooting blast from the past from the early 1970’s–Buzz Belcher and Roger Lyons

And before Buzz and Roger came Jon Broderick.  Below is a photo of Clark Lake’s Jon Broderick barefooting.  He was an early adapter of the technique, if not the first to do it at Clark Lake. 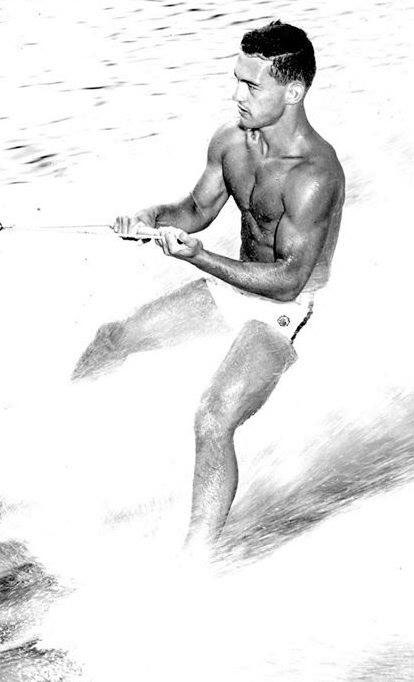