The Raft-O-Rama met today (Sunday) to review over 50 theme ideas for the 2017 Raft-O-Rama at Clark Lake.  And the winner is?  TV Shows!

There are lots of TV shows, and a large variety of genres.  TV shows can be described as creative, humorous, dramatic, and engaging.  And that, of course, fits the Raft-O-Rama spirit completely.  So, on this day in January, the seeds of ideas begin to form, and germinate to blossom fully formed on Sunday, August 6th. 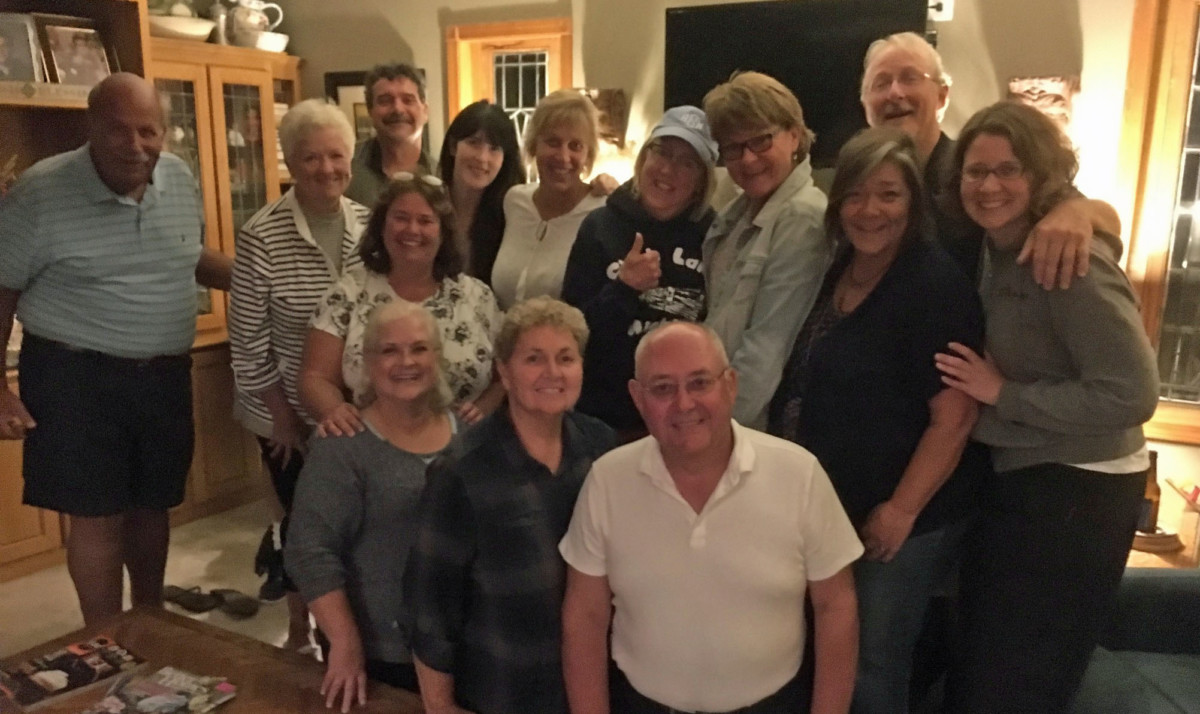 One of Clark Lake’s most iconic events, Raft-O-Rama gets underway now.  Plenty of work is involved.  And without a committee whose members roll up their sleeves, it wouldn’t happen.  From the luminary project to the parade itself, there are lots of logistics.  The good news?  The committee is a wonderful group who love the lake–and they are not opposed to having some fun along the way.  Would you like to join the committee?  Contact Joe Collins at joemcollins@yahoo.com.

To partake in some Clark Lake Spirit (and to reassure yourself summer will indeed return), check out the results from the 2016 running of Raft-O-Rama. 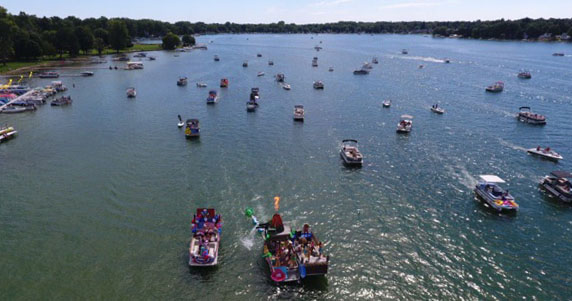 The voting took place by the judges. Spectators at the event submitted their votes for the Peoples Choice award. 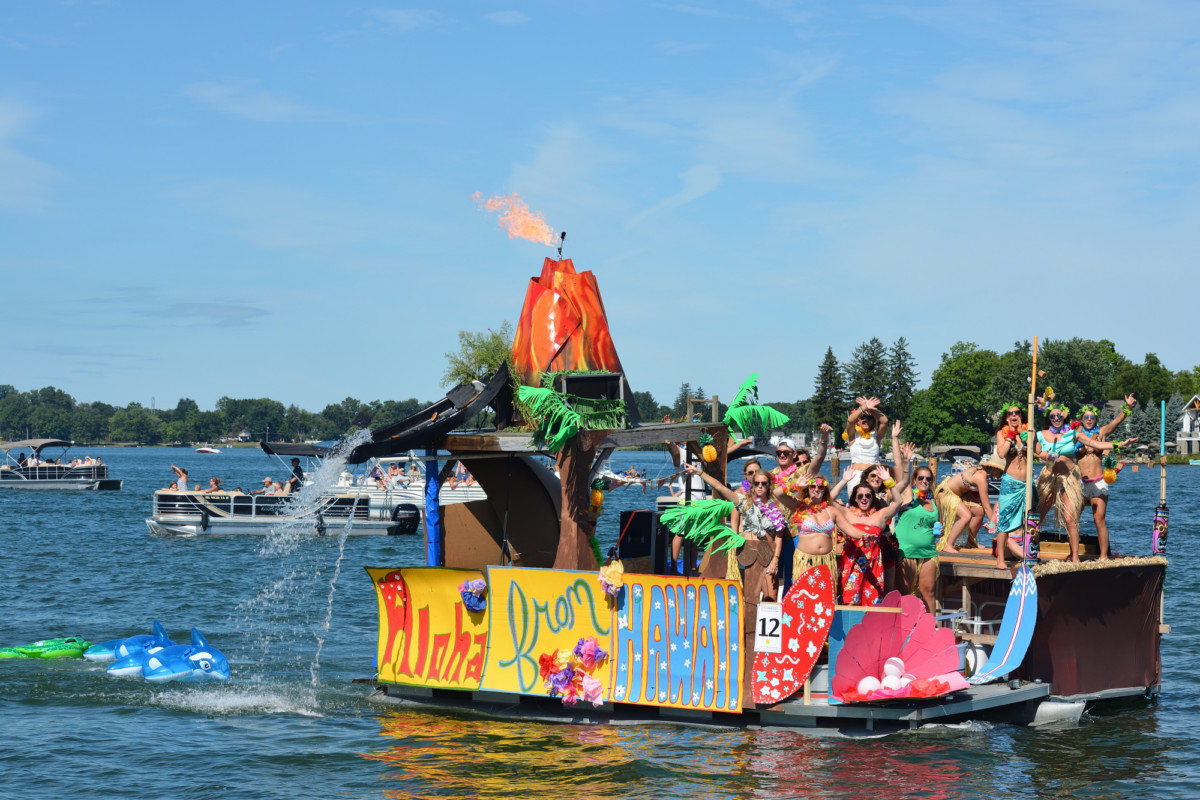 Raft-O-Rama selects judges for their independence.  Here are the awards for each category. 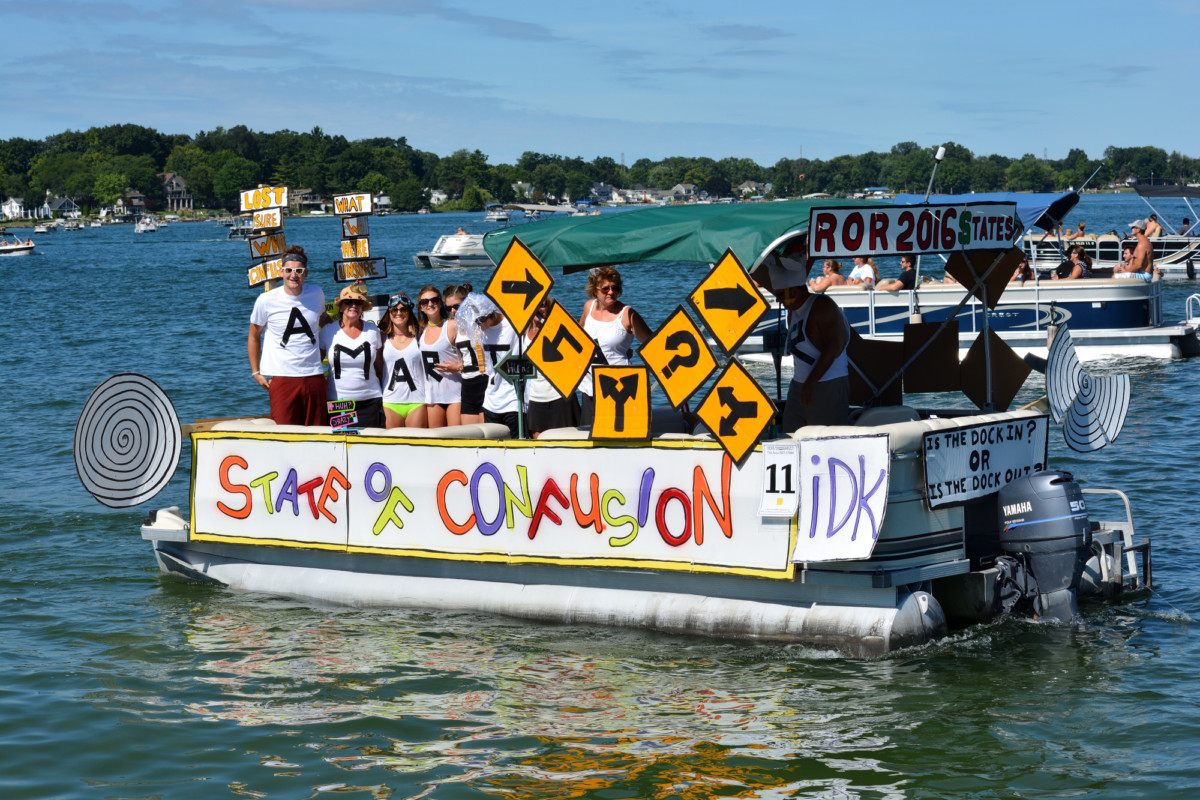 Remarkably, the State of Confusion raft navigated the entire circumference of the lake in reverse! 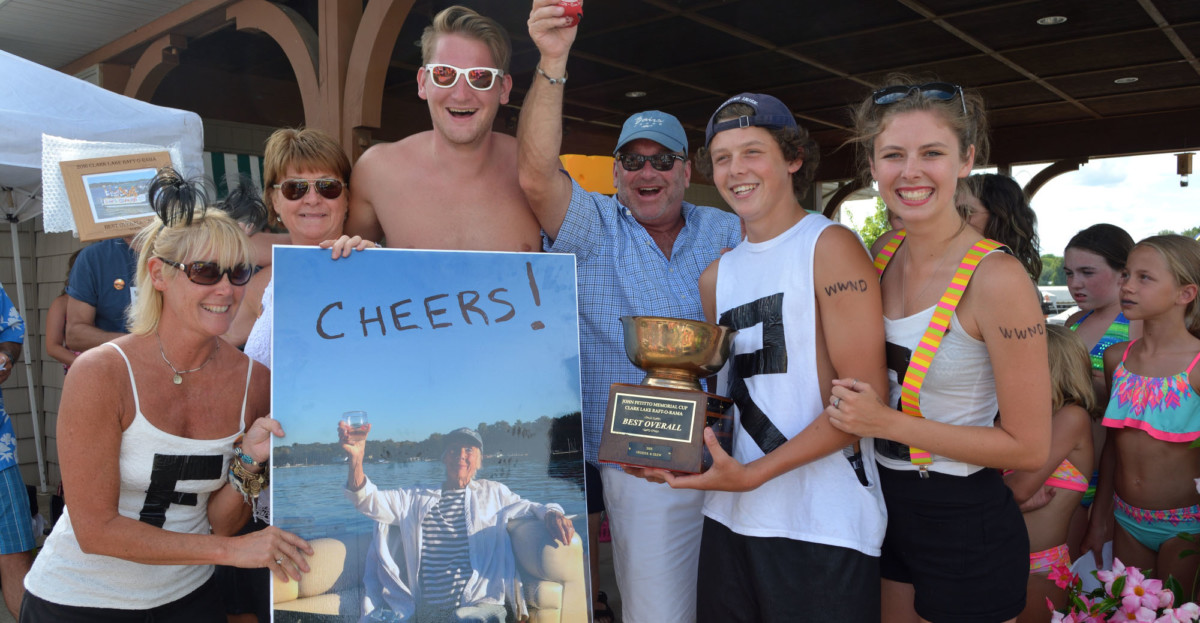 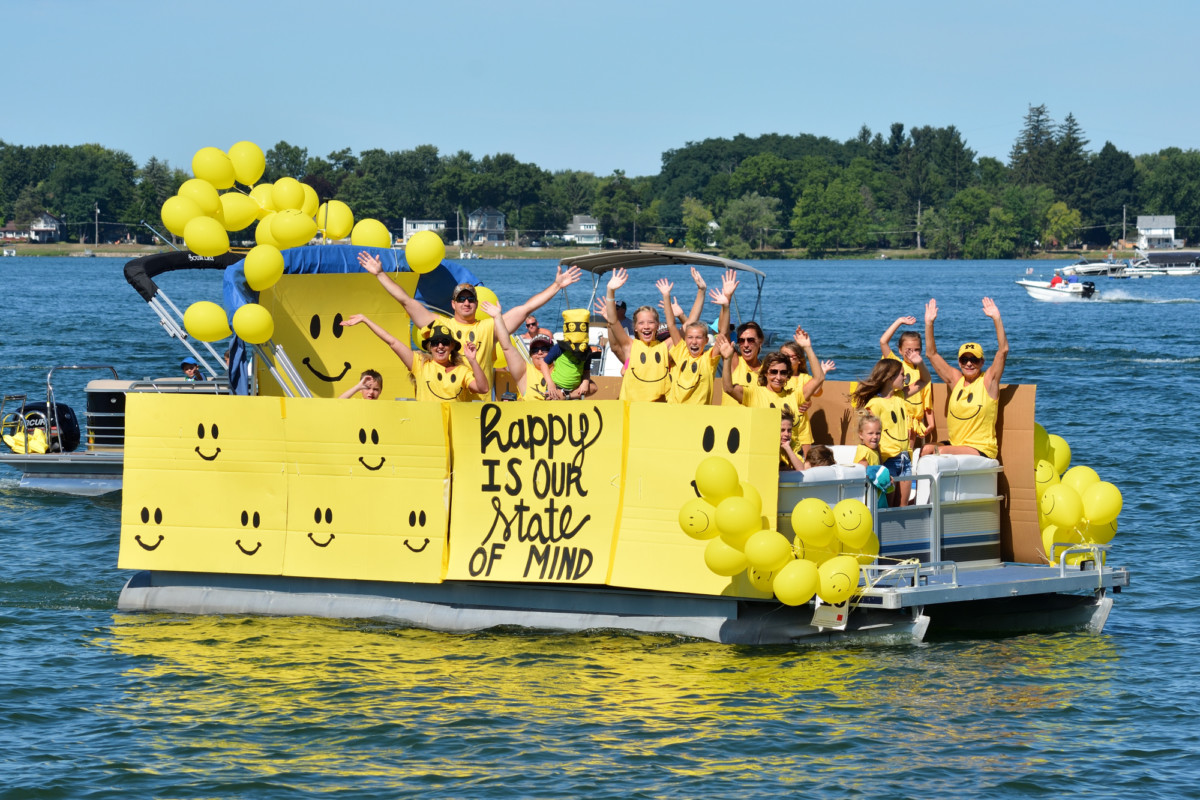 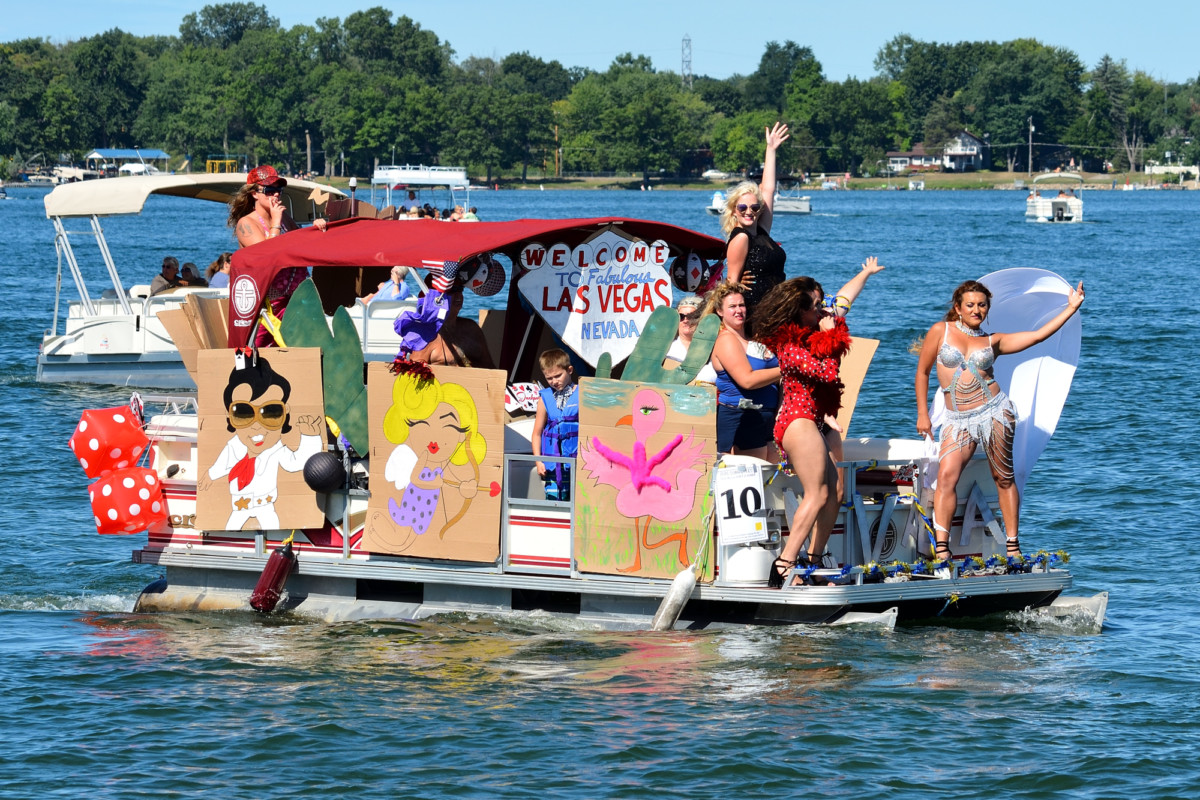 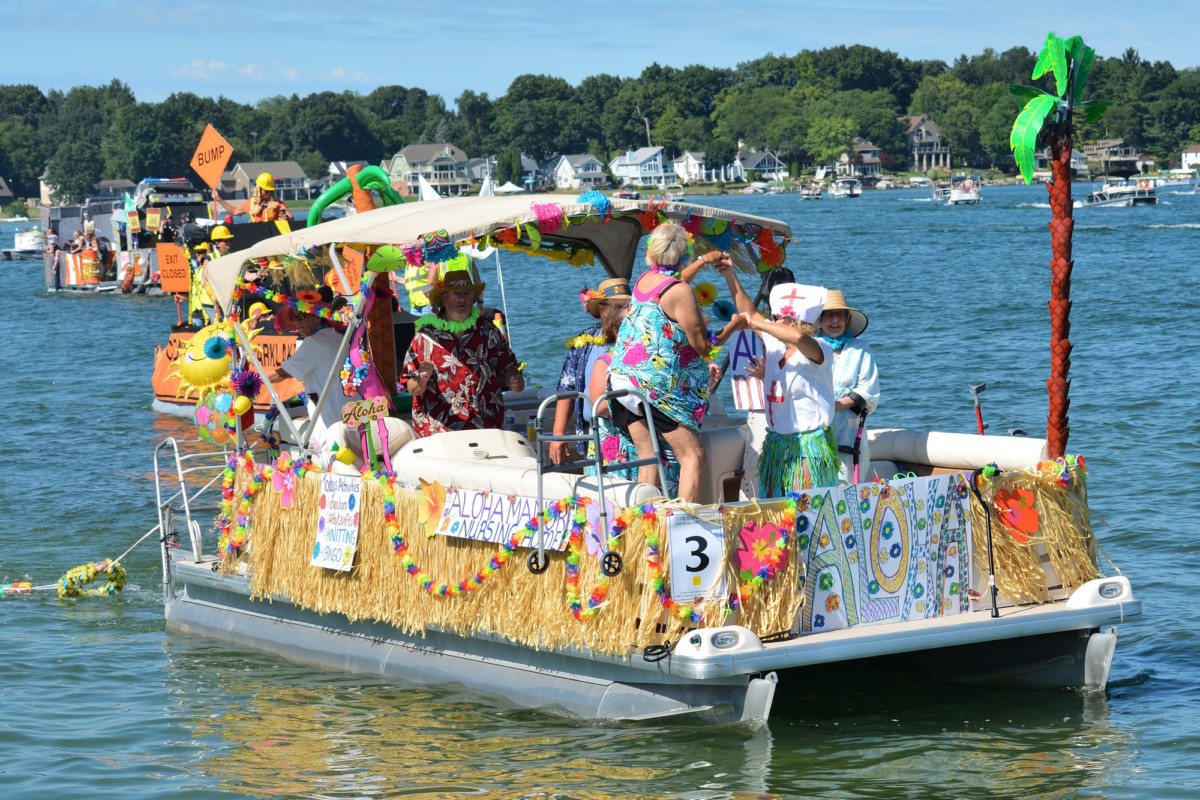 The Hawaiian Manor group won Raft-O-Rama in 1965 and have not had an entry since then.  They decided to change that this year, and won the “funniest” category. 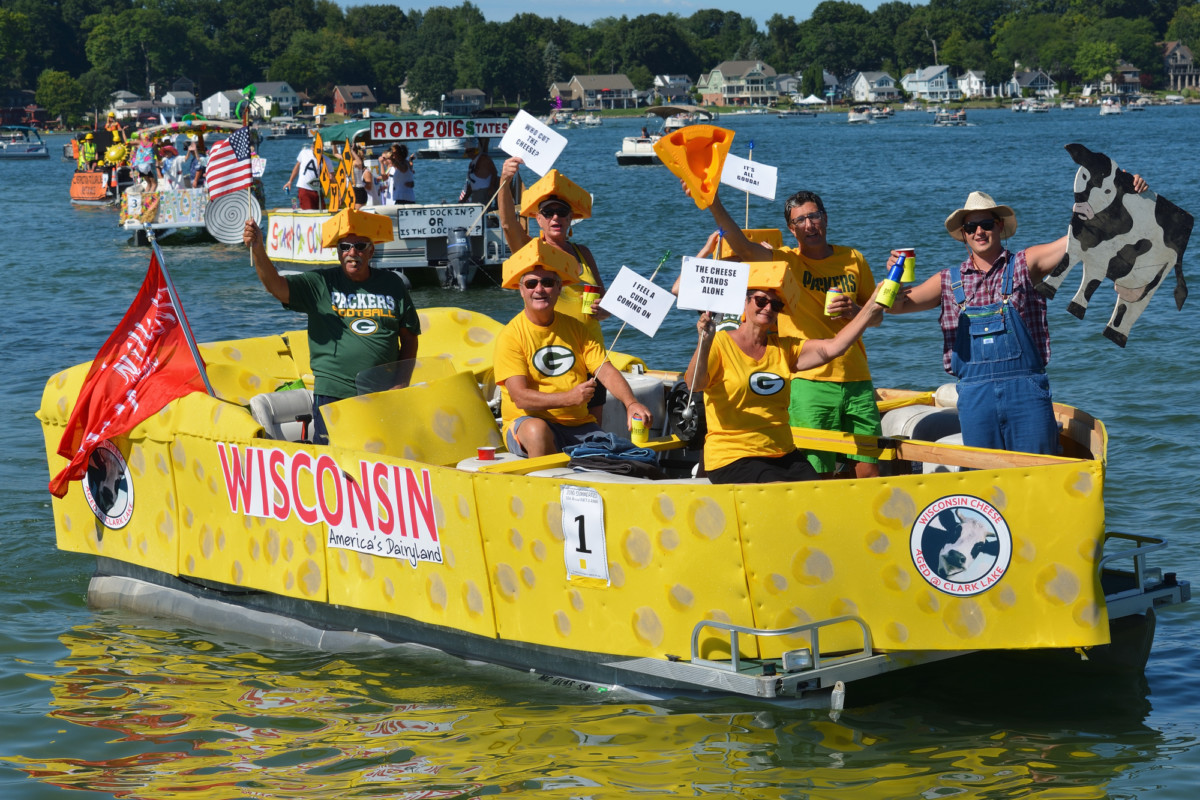 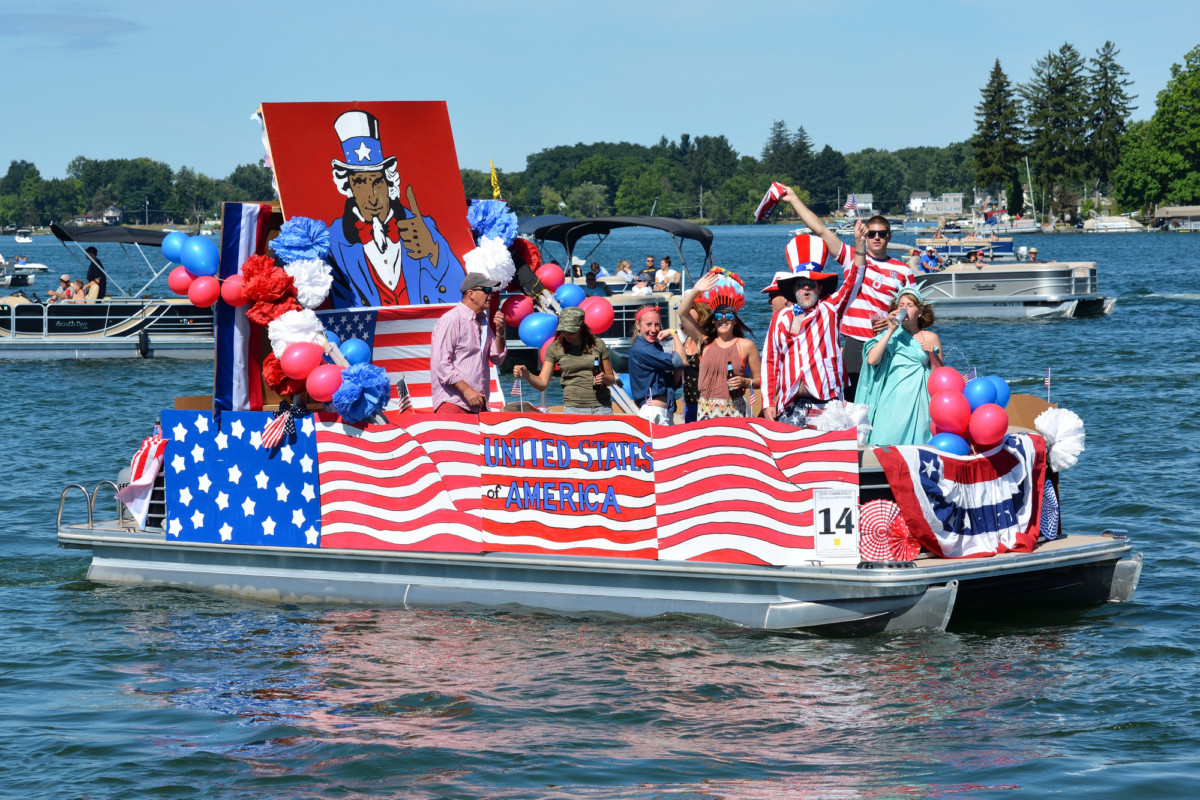 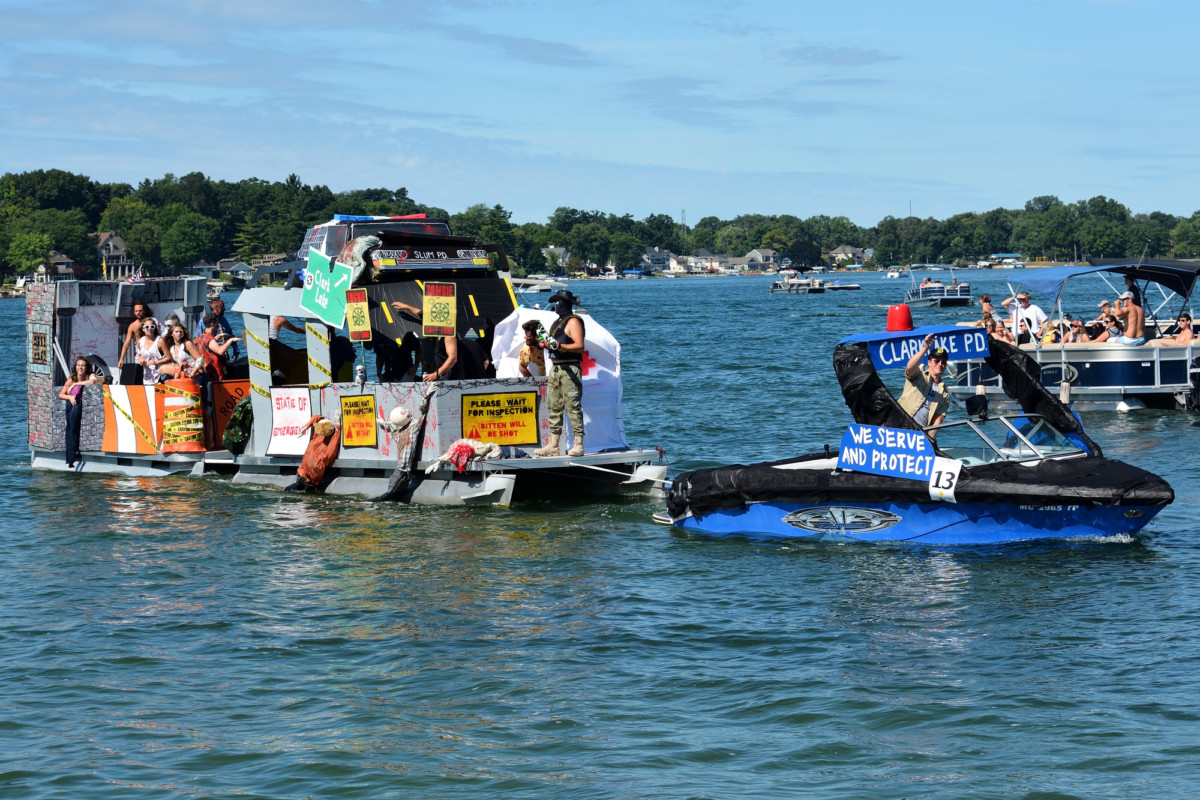 Furthest from Theme–State of Emergency (13) 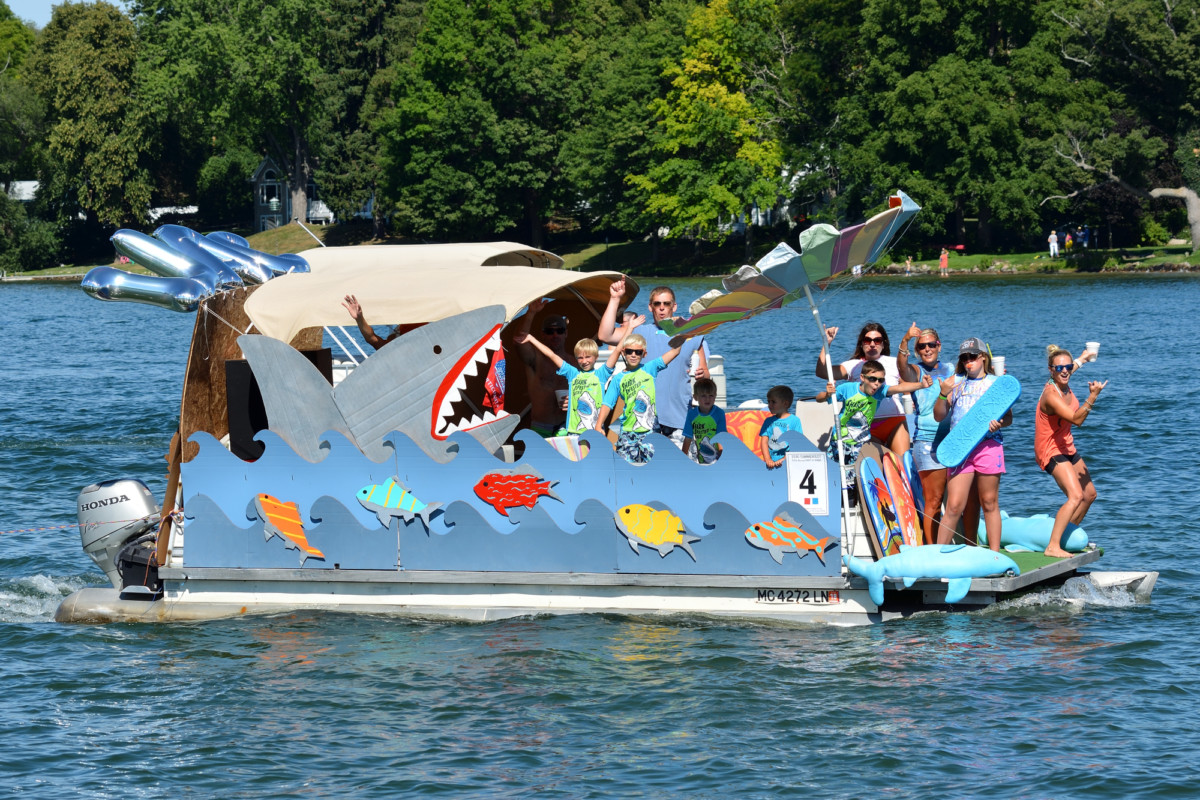 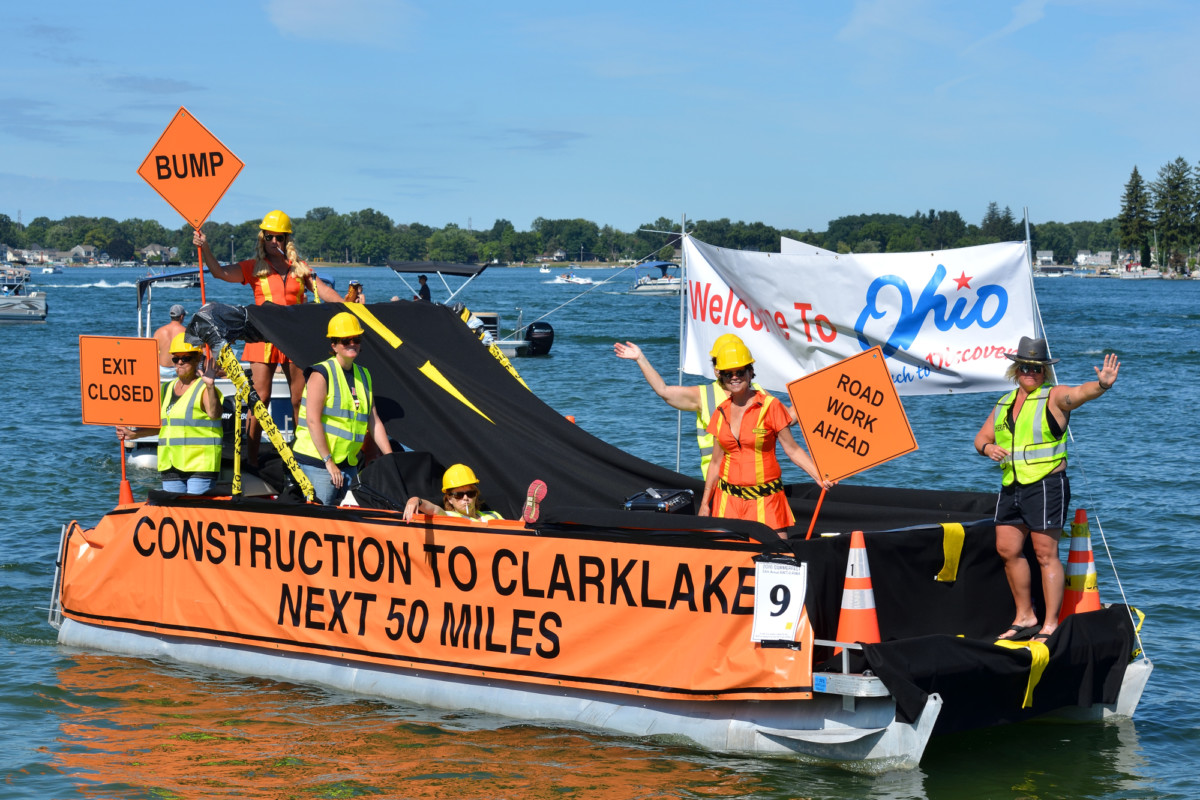 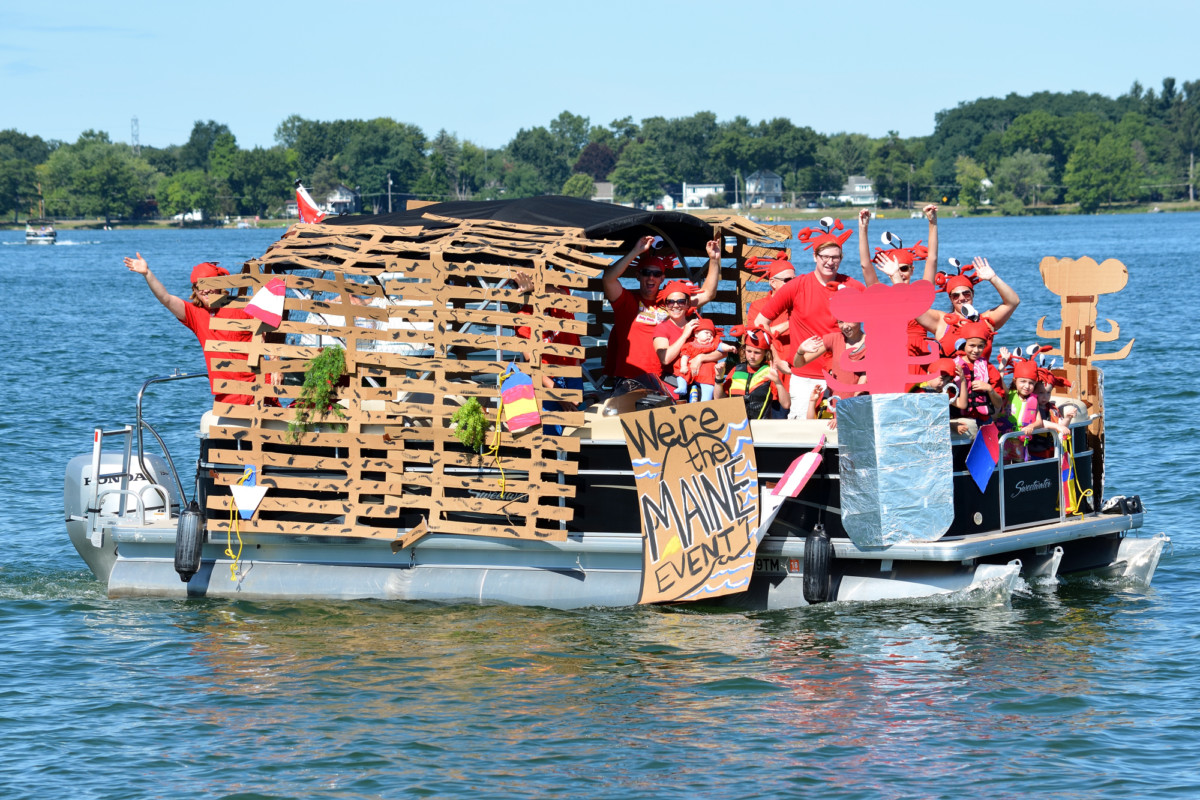 Most Attention to Detail–The Main Event (2) 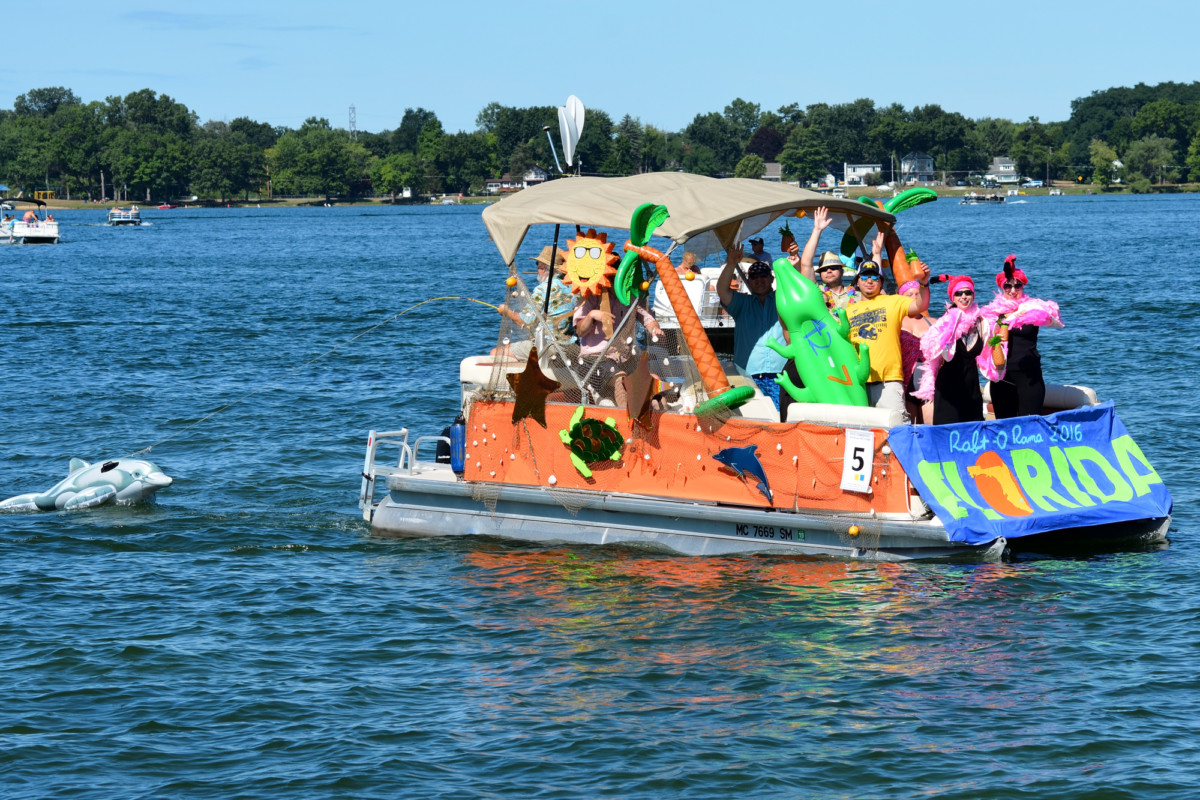 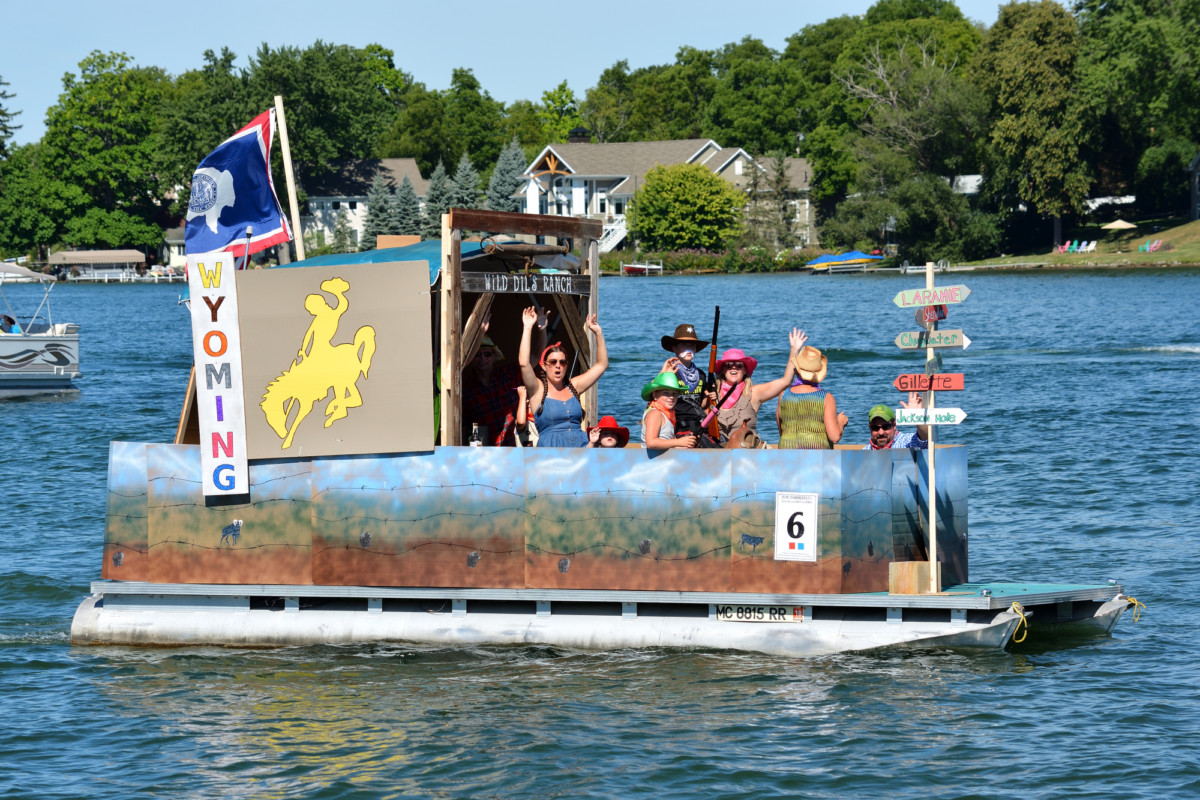 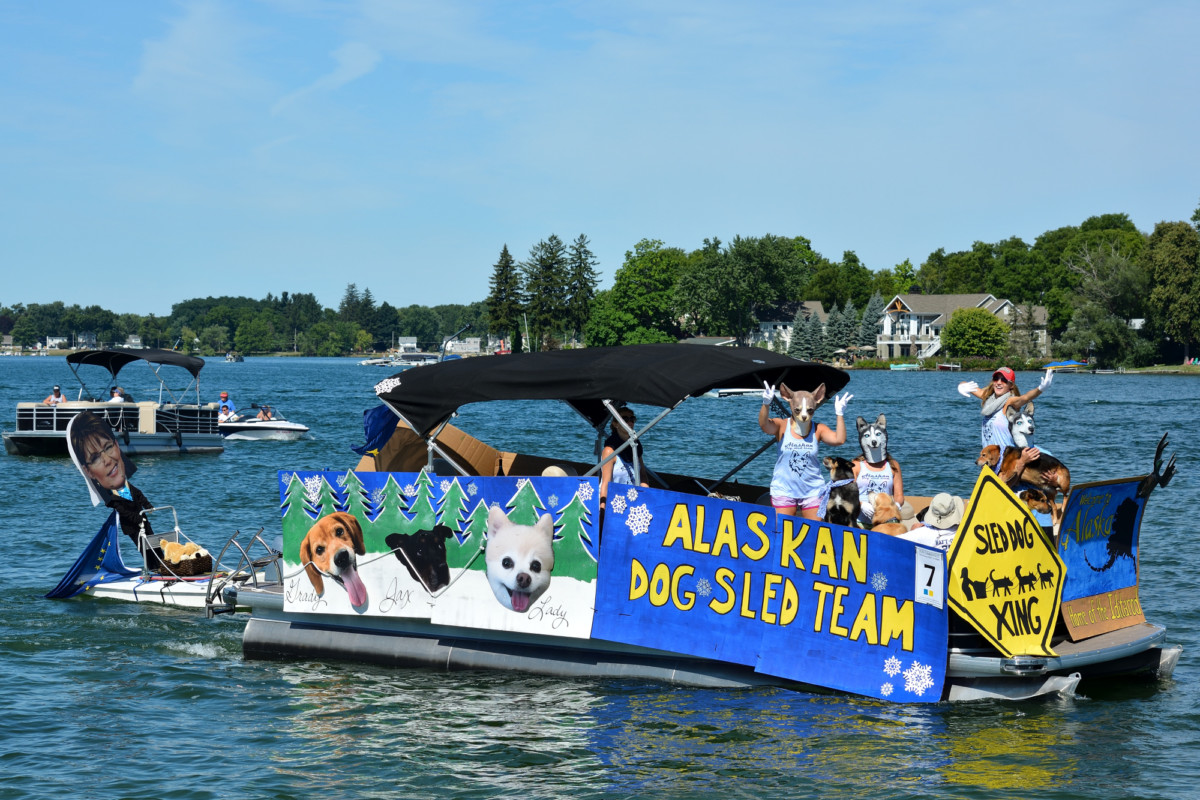 Alaskan Dog Sled (7)
Yes, that is Sarah Palin riding along. 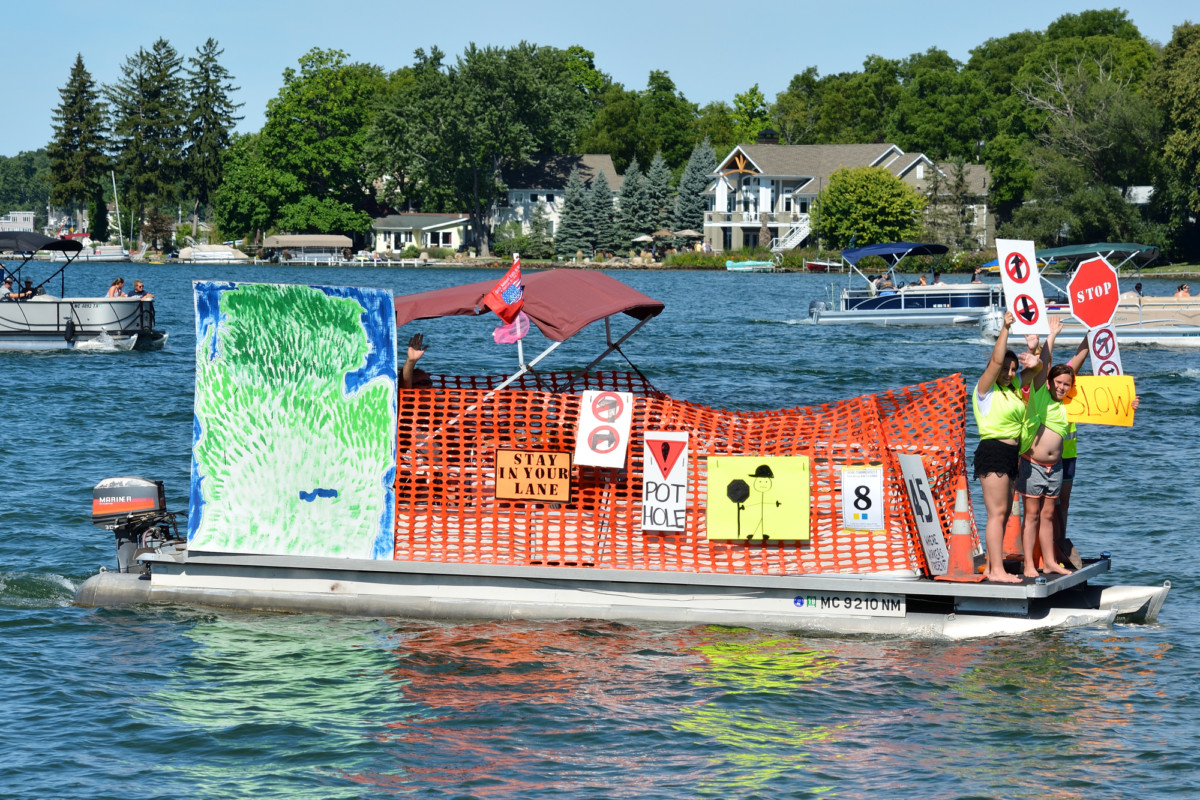 Two winning raft entries honored the memory of Angela Ligibel, who passed away July 30th.  Angela was important not only to family and friends, but the Clark Lake community at large.  She was an avid fan of Raft-O-Rama and participated in it for many years.  Angela was known as “Nana” to her grandchildren and great-grandchildren and thus the raft entry “Aloha Nana.”  Her nickname was “Birdie” in Raft-O-Rama circles, and you can see that recognized on the Confusion raft.

Many of Angela’s family were present at the awards ceremony.  Afterwards they posed for this photo. 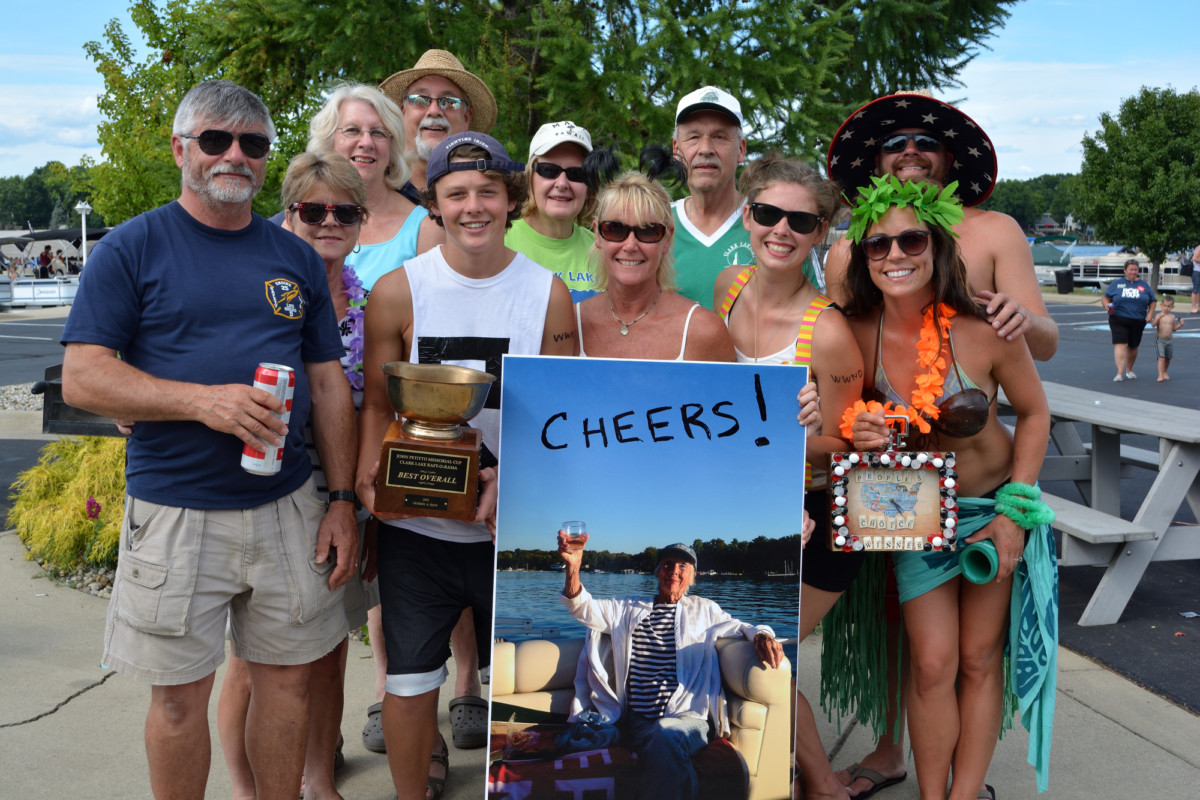 Evelyn Menard, winner of last year’s Mary Reynolds Spirit of Clark, congratulated this year’s winner–Bill Bendele, Jr. Evelyn’s love of fireworks has been her family’s inspiration to present magnificent displays at the east end on the Fourth of July since 2000.  Bill has been involved in many of the building and infrastructure projects around the lake.  The award was presented by Joey Reynolds. 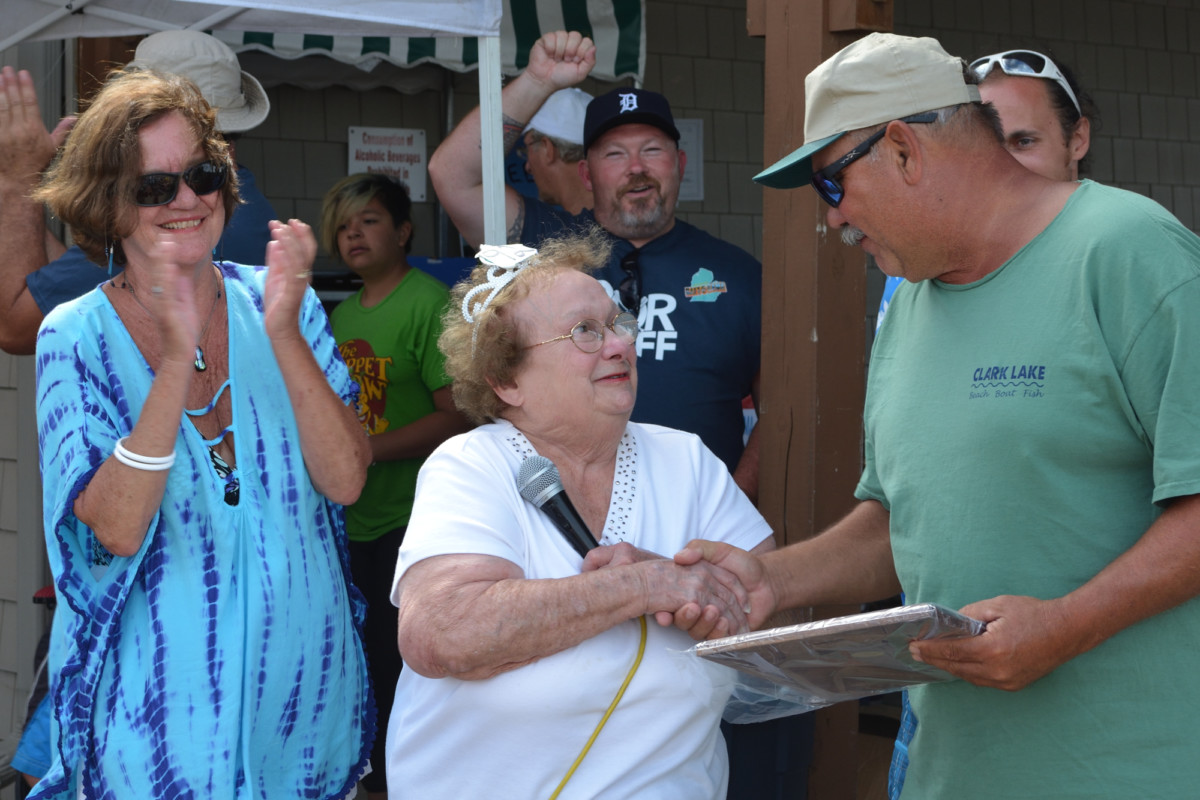 And finally an airborne photo of Eagle Point where lots of the day’s activity took place, courtesy of Andrew Lajdziak. 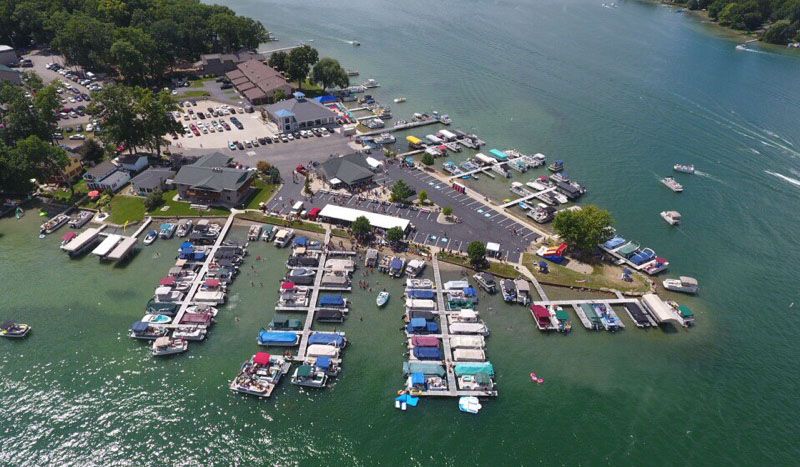