Voters in Jackson County said “yes” to higher property taxes to benefit county parks in an election last August. With the new funding, the Jackson County Parks Department has hired an Ann Arbor landscape architect firm.  On June 10, Beckett & Raeder conducted a public meeting at the Columbia Township Hall to discuss the future of the County Park at Clark Lake.  Among those attending from Clark Lake were those who have volunteered their time on behalf of the lake to learn more about Clark Lake’s two parks, proposed changes to them, seek the views of other Clark Lake residents about them, and to stand up for Clark Lake’s interests.  The group is called the Clark Lake Parks Commission.

After the Clark Lake Parks Commission members discussed what they learned at the June 10th public meeting, they crafted a letter addressed to the County Parks Department.  The letter emphasizes the problems that emerged after improvements were made to the Township Park and what could be done to prevent a repeat performance at the County Park.  With transparency in mind, here is the text of the letter.

“Our group has reviewed conclusions reached at the planning session, sought additional input from others at Clark Lake, and discussed the potential improvements.

“Clark Lake learned some hard lessons from improvements of the Columbia Township Park at the west end.   Once implemented, overcrowding resulted, accompanied by alcohol and drug use, haphazard parking, and an exponential increase in littering.  All of these issues occurred while families and children played and relaxed nearby.  The unintended consequences of the improvements created blight upon our community, and put the safety of our residents and children at risk.  Admitting the problem at a board meeting, a Columbia Township trustee commented “we made it too nice.”

“A replay of that scenario at the County Park is unnecessary.  In your planning session, security and safety emerged as major themes.  Our group believes starting, and emphasizing, those themes will mitigate potential problems.

“The initiative to “improve fences/perimeter/definition/gate” won the most green dots on your priority poster.  Beside its dilapidated appearance, the current fence serves no useful function.  Creating a fence of the perimeter, a separating barrier that safeguards Community Center activities, and gate to close the park during off-hours could offer an instant and recognizable upgrade.  Beckett & Raeder could develop some aesthetically pleasing designs to accomplish this.  [Note: Beckett & Raeder is the landscape architect firm hired by the County].

“Also learned from the Township Park experience is the utmost importance of security.  Columbia Township installed security cameras at that location.  Officers then remotely monitored the park for safety concerns and unlawful conduct.  Use of the cameras assisted in drunk and drugged drivers being apprehended, and citations for open alcohol and drug use being issued.  The word spread and problems receded. Installing security cameras at the County Park, and putting them under the auspices of Columbia Township Police, could not only stop abuse in its tracks, but create a safer experience for families using the park as well as residents of Clark Lake.

“In your closing comments, you pointed out that improvements would be made incrementally among the 18 parks in the system.  Established in 1925, the County Park at Clark Lake was the County’s first.  Residents of Clark Lake have devoted time, effort and voluntary donations to elevate this park.  The Community Center, landscaping from our volunteer Garden Angels, and the Spirit Trail with its annual cleanups are all evidence of this.  Preserving this restful, relaxing low-impact jewel is within your power.  Why not start with improvements that offer safety and security?

“In regards to this project, we ask you to respond to this message and to keep our group informed of your intentions, plans, and timetables. 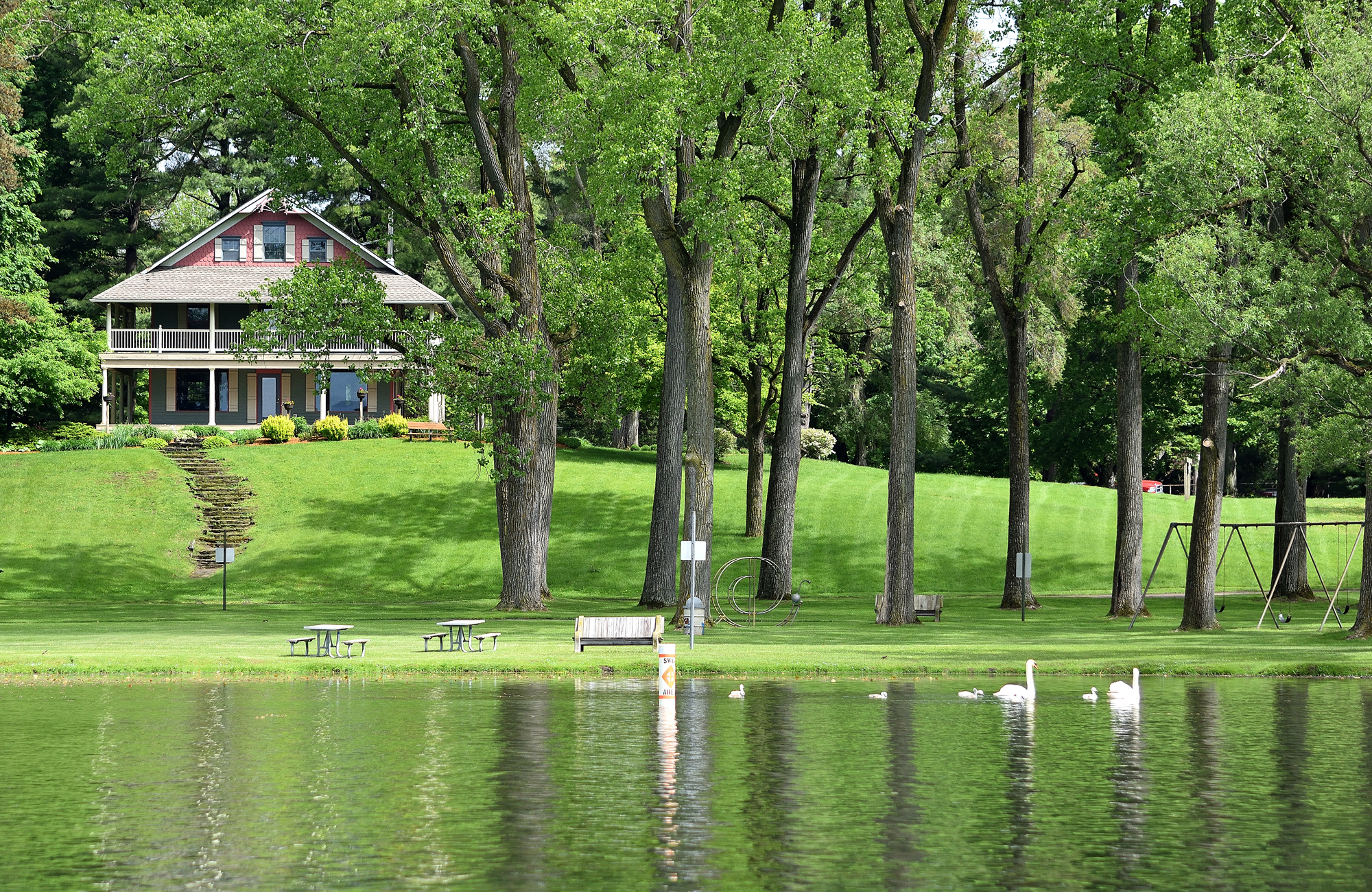 The County Parks Department replied to the letter shortly after receiving it.  Parks Director Jeff Hovarter responded they “clearly heard safety, passive use, importance of respecting the Community Center history as key issues for Clark Lake. We can and will develop some park amenities/improvement concepts for review around this input.”

On Friday, Bendele’s crew removed some of the decaying leaves that accumulate along the shoreline.