As reported on this website, Clark Lake gathered on shore and on rafts to view Monday’s solar eclipse.  The moon covered 85% of the sun at 2:25 pm.  With safety glasses or empty Rice Krispie boxes, viewers got to see it.  But not all Clark Lakers were satisfied with the prospect of the 15% sliver of sun that would still show through, especially if your life has been all about science. Dick and Lois Moyer, who live on the North Shore, boarded a plane for South Carolina where they met up with one of Dick’s former students.  Following in Dick’s footsteps, Dr. Mary Starr had also become  science educator.  They had planned this eclipse excursion since January with all the details covered, except one they had no control over–the weather. 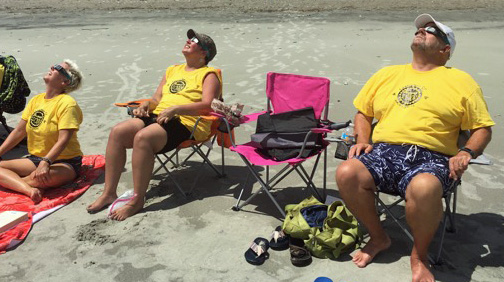 “Monday morning dawned with heavy rain and iffy spirits.  The skies cleared a bit after 11 am and we began to think we might have a chance.  We headed for the beach around noon with a streamed playlist of moon/sun music, custom T-shirts, our glasses, and beach chairs.  The moon was scheduled to start covering the sun around 1:20 with totality coming at 2:47 pm.  It was sunny but a bank of clouds lurked over the ocean and appeared to head piece by piece in our direction.  We watched as the sun’s disc became smaller and smaller and enjoyed the cooler temperatures as it dropped from the mid 90s.  Around 2:40 the sun became invisible to us behind heavy clouds but we saw a little break off to the east.  Would the timing be right?  It was.  We were able to view the totality—applause and cheers could be heard up and down the beach.  It was truly an indescribable experience.  We took off the glasses for that minute, under the darkened sky.  We were indeed lucky–by 3 pm the clouds moved in for the rest of the day. 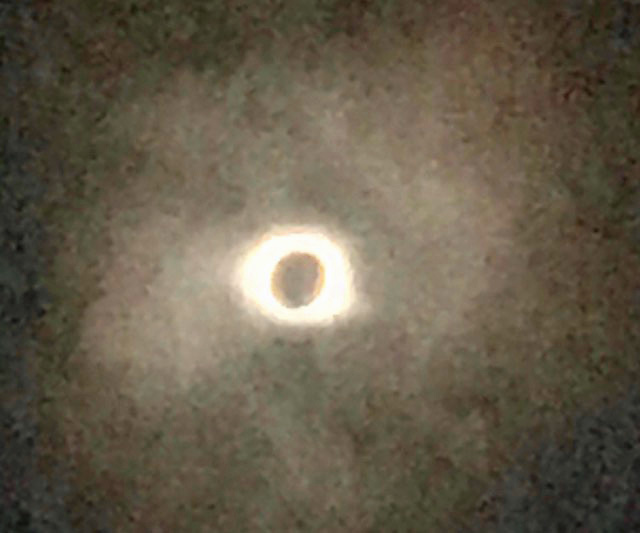