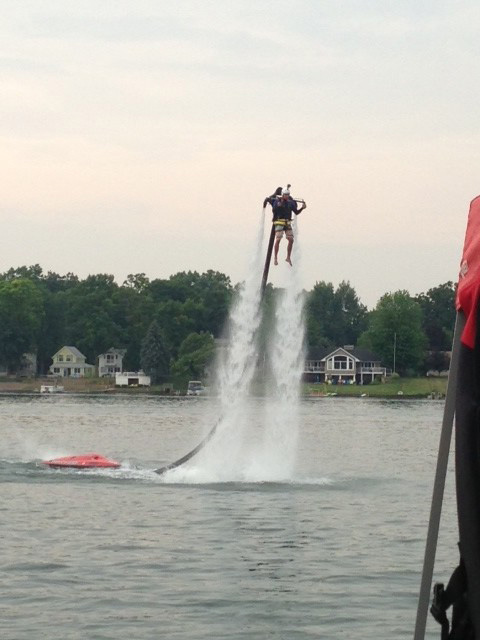 B.J. Lyons rises above it all!

It might seem like Clark Lake just had a James Bond moment.  Did the master spy catapult from his Aston-Martin and then erupt with a splash from the deep off Eagle Point?  Not really.  But reality was much more fun than watching any movie, 007 or not.

A few intrepid Clark Lakes types took to the air on a Jet Lev.  It’s 28-pounds of equipment strapped to your back which is hooked up to a modified jet ski.  The jet ski generates thrust via a stream of water delivered at 1200 gallons per minute to the backpack.  That propels the wearer to a height of 35 to 40 feet above the water.  It also allows other types of maneuvers.  According to B.J. Lyons, who has experience as a professional airplane pilot, controlling the device is not unlike the fundamentals of piloting an aircraft.  Only different, of course.  This experience was totally new, even to a seasoned pilot.  Says B.J. it was “kinda scary, but a total thrill.”

Roger Lyons, B.J.’s father, brought the Jet Lev and its crew to Clark Lake for the demonstration.  “It was another first for Clark Lake and well worth the $300 price tag for each 30-minute ride,” points out Roger.

Other Clark Lakers who took the ride included Danny Omo, Jerry Shaughnessy, Kevin Fink, John Collins, Gary Shultz, Connor Ford, Bruce Lyons, and Bill Searles and daughter, Elan.  If you’re thinking about a new toy, there is good news.  Once costing about $200,000, the units now go for about $70,000.  Jet Lev can be found on the web at http://www.jetlev.com/#!/page_performance.  The Jet Lev visit to Clark Lake took place on Friday and Saturday, June 21 and 22 at Eagle Point.